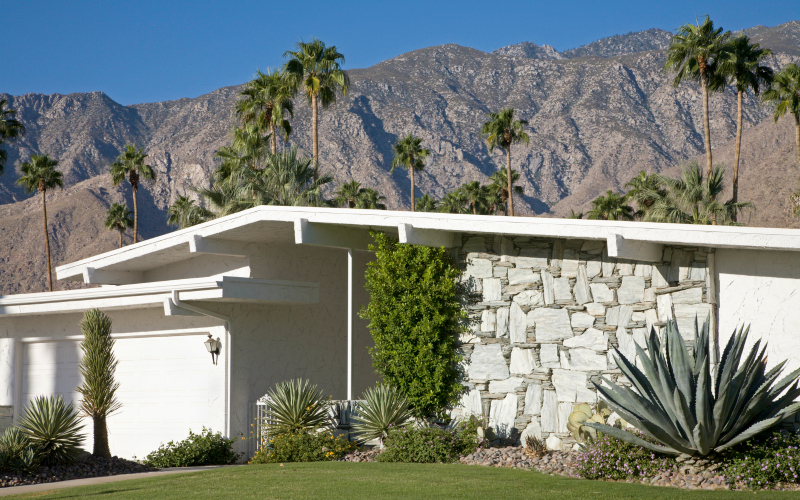 Palm Springs is always sunny and lovely, but like any community—especially one so linked to the scandalous goings-on of Golden Age Hollywood—there’s always a bit of darkness to be found if you know where to look. To learn a bit about some of the creepier things hidden behind those fancy gates, we were sent to the experts at Palm Springs Celebrity Homes for all the gossip. Here’s some of what we learned.

Biographer Donald Spoto claims that it was here, at Bing Crosby’s home, where JFK and Marilyn Monroe began their affair, though rumors point to several other Palm Springs locations as possible sites of trysts between the ill-fated pair, including a home Monroe may have rented for herself at 1326 North Rose Avenue.

In 1975, Al Adamson rented this palatial 7,006-square-foot, five-bedroom, six-bath home, built in 1925. In addition to living here, he used it as the set of his “sexploitation” movie Blazing Stewardesses, starring Yvonne De Carlo. In 1995, Adamson’s murdered body was found, buried under the hot tub.

Televangelist couple Jim and Tammy Faye Bakker rented this four-bedroom, four-bath, home on a 25,700-square-foot lot, named Les Petit Oasis, in January 1988. They planned to use it as a base to launch a Christian amusement park and timeshare project, but before it could come to fruition, Jim Bakker was convicted of fraud in connection to a similar development in Fort Mill, South Carolina, and was accused of drugging and raping a young church worker.

Alan Ladd appeared in 96 films between 1932 to 1964, including his most famous role in Shane. He overdosed on barbiturates and alcohol in this home, designed by Donald Wexler. It remains unclear if his death was a suicide, accident, or something else.

Born Dora Mae, the actress and socialite who became known as Gregg Sherwood married Horace Dodge Jr., an heir to the Dodge Motors fortune, in 1953. Dodge initiated divorce proceedings, but before they could be finalized, he died unexpectedly, leaving Sherwood to inherit $11 million (plus an additional $9 million she collected after suing Dodge’s mother). Sherwood and her young bodyguard boyfriend took the cash and went on a lavish spending spree, including throwing legendary parties at this address—until the money ran out. Sherwood was forced to file for bankruptcy in 1978, and pled guilty to embezzling money from her son’s trust fund.

Hollywood Babylon author and filmmaker Kenneth Anger—who, at one time kept convicted murderer and Charles Manson associate Bobby Beausoleil as his live-in muse—lived for a time in the guest house on this property. He claimed the home is haunted by the ghost of its previous owner, Al Jolson, who first bought it in the late 1930s, sold it, then felt compelled to buy it again shortly before his death in 1950.

Actor Bill Goodwin appeared in 43 films dating back to 1935, including Riding High, and Bundle of Joy. He bought this five-bedroom, five-bath home in 1956. Late on the night of May 9, 1958, he was found dead in his car on South Palm Canyon Drive. His wife, actress Philippa Hilber, claimed he left behind a mysterious note saying that he was going out for a drive.

This property was owned by Cheryl Crane, the troubled daughter of Lana Turner. At 14, Crane was acquitted of stabbing her mother’s abusive mobster boyfriend, Johnny Stompanato, to death, following an incident in which the jealous Stompantato had threatened Sean Connery at gunpoint.

A boxer-turned-actor, Tom Neal had a few roles on screen in the 1940s and 1950s, but they dried up after he suffered a broken nose and cheekbone in a brawl with fellow actor Franchot Tone. He eventually moved to Palm Springs where he made ends meet doing landscaping work and working the reservations desk at the Doll House restaurant. He attempted a comeback with a screenplay based on the Black Dahlia murder, but the film was never made, and it’s rumored that the little investment backing he was given to produce the movie was used to buy this house, where he lived with his third wife, Gail Evatt. In 1965, he killed Evatt in the house, and was convicted of manslaughter.