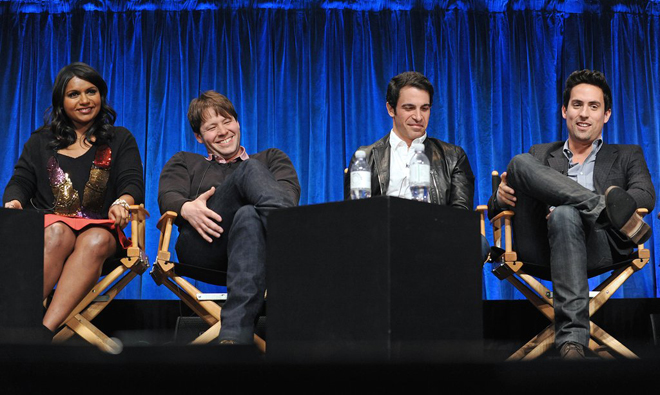 The cast of The Mindy Project had reason to be excited last night during their PaleyFest panel. They learned this week that FOX had renewed their show for a second season, which, according to executive producer Matt Warburton, broadens their storyline horizons. That’s not to say they know what to do with season two quite yet. “We had a strong inclination to really entertain and surprise you guys” with the first season, Warburton said, adding that getting renewed “made it real for us that we need to start thinking about where we can go from there.”

Aside from a few hints about a future episode shot in Long Beach in which Chris Messina’s Dr. Danny Castellano wrestles Brendan the midwife (Mark Duplass) while wearing a Speedo, Mindy Kaling & Co. kept upcoming storyline ideas under wraps. Fans of The Mindy Project got a sneak peek at this week’s episode — Kaling’s OB/GYN character Dr. Mindy Lahiri tackles insecurities about her weight and singledom, and develops an unexpected bond with Bev, the practice’s former nurse who just signed on to become a series regular.

It’s a strong episode — Morgan’s one-liners are especially on point — but they didn’t hold a candle to the gems spewing from Ike Barinholtz’s mouth while riffing with his costars Friday. That leads us to the first and perhaps most crucial element of The Mindy Project’s success.

1. Chemistry
Granted, these are actors who are paid to pretend they have chemistry, but if we learned anything from the PaleyFest panel, it’s our genuine Bucket List aspiration to hang out with the cast. Barinholtz, Kaling, and Ed Weeks (who plays Dr. Jeremy Reed) took turns doing their best Messina impressions, harassed each other about what constitutes a proper romantic comedy, and exchanged harmless sexual advances. (The verdict on a brief, platonic kiss between Kaling and Barinholtz: goofy in the way macking on a member of your college crew during a night of debauchery might be but not likely to spin off into its own plot line.)

Even secondary characters have proven themselves essential to sustaining the show’s dynamic. There’s Barinholtz, who started out on the show as a writer, and Beth Grant, whose character, Bev, saves Mindy from herself in the previewed episode. But Zoe Jarman, who plays secretary Betsy Putch, might have one of the most interesting roles on the show, especially for die-hard fans of The Office. While developing the characters, Kaling said she thought back to the relationship between Dwight and Michael and the way the assistant (to the) regional manager idolized his boss. “What’s great about the character here is that (Betsy) just decided a long time ago that I was great and glamorous,” Kaling explained. “I think it’s good for a lead to have someone who thinks that they’re worth something.”

2. Experience
Unsurprisingly, the TV set where Kaling cut her teeth has informed many of her producing and writing decisions on Mindy Project. After eight years working on The Office as both a writer and actor, Kaling heads back in a few days to shoot the finale. (“That’s great,” Barinholtz quipped. “Once you shoot that, I don’t want to talk about The Office anymore.”) But taking on her own show meant stretching into joke territory that was never quite right for the NBC tribute to all things awkward and mundane. “I was trained to be a comedy writer from Greg Daniels, but it wasn’t necessarily my style,” she said. “What was beautiful about the show is how truthful it was and how unglamorous it was. But with my show, I wanted to do something that was a little more my organic interests before the show.” As visual explanation of those interests, Kaling gestured to her PaleyFest outfit — sky-high glittery heels, a stack of bangles on her arm, and a shirt bearing two huge sequined tubes of lipstick.

3. A healthy balance between glam and reality
Since previews of The Mindy Project, Kaling has emphasized how her character’s (and her own) aesthetic leanings would never outweigh her intellect or her commitment to her career. On the show, Dr. Lahiri skips out on highly anticipated dates to tend to her patients, sacrifices sleep and at times personal hygiene to answer frantic pages from the hospital — what we’ve come to expect from working physicians. But she also dresses at a level well above the wardrobe her Office character Kelly Kapoor wore. “On The Office, my clothes were like, from T.J. Maxx,” Kaling says. “My character made like, $17,000 a year.”

These more frivolous interests sometimes raise eyebrows among viewers and critics who hold the show’s creator to strict role model standards. “That’s when I get jealous of the Danny McBrides and the Steve Carells,” Kaling said, “because when they play a character, you’re not like, ‘What are you saying about white men with this portrayal of Michael Scott?’ When I play this character, and I want to play a fun character with these big flaws, I sometimes think that I’m speaking for all Indian American women. I’m like, damn it, why wasn’t this 75 years in the future?”

4. Workhorse showrunner
No doubt it’s a tough line to walk, but if her costars’ endorsements are any clue, their tireless leader (“HurriKaling,” as Barinholtz called her) can handle it. “I can drive off the lot, I can just turn it off,” Messina said. “These guys” — gesturing to Kaling and executive producer Warburton — “they’re the reason we’re coming back next year. They’ve just devoted their entire lives to this show. It’s been beautiful to watch.” On top of wrapping up the final seasons of The Office while launching The Mindy Project, Kaling has also shown up in films like No Strings Attached and The Five-Year Engagement, released her 2011 book Is Everyone Hanging Out Without Me? (And Other Concerns), and started work on her second book, due out sometime in the next two years.

Her curriculum vitae is exhausting to read. When does she find time to sleep? “The thing is,” Kaling said toward the end of the night, “when you’re literally living your life’s dream, you don’t want to be sleeping. You want to be awake. I’m like the star of my own show, and I’m still a little chubby and stuff. How did this happen?”