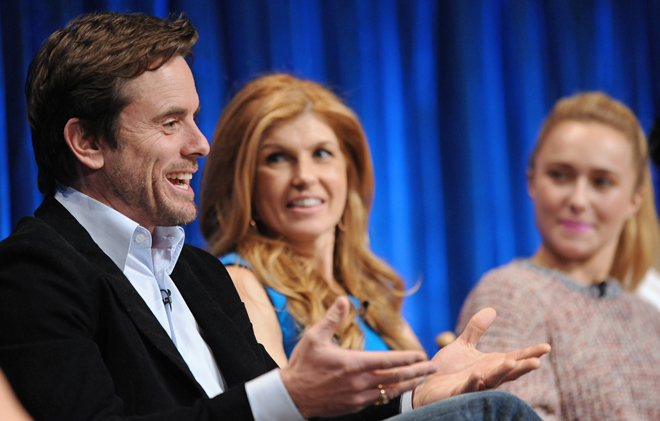 Can the world handle a Nashville tour? Stars of ABC’s hit drama — Connie Britton, Hayden Panettiere, Clare Bowen, Charles Esten, Jonathan Jackson, and Sam Palladio — seemed a little wary when pressed during Saturday afternoon’s PaleyFest Q&A. Their fans in the audience, however, were happy to answer for them with thundering applause.

It seems like a natural step for the actors who’ve developed a following for their musical talents as much as for their on-screen chemistry. Offscreen, Nashville soundtrack has already been downloaded some 1.5 million times; onscreen, original music remains the centerpiece of a show embroiled in under-the-table political dealings, simmering romances, and plenty of Southern twang.

For creator and executive producer Callie Khouri (check out our Q&A with her), who counts 1991’s Thelma & Louise and Divine Secrets of the Ya-Ya Sisterhood among her writing credits, the show has been a way to pay tribute to a city that still holds her heart. “I’m glad everybody’s getting to see my town the way I’ve always wanted to show it,” Khouri said from the Saban Theatre stage.

Khouri introduced the last aired episode of the show’s first season, “Dear Brother,” which revolved around the aftermath of Rayna Jaymes and Teddy’s divorce and the abrupt departure of Juliette Barnes’ manager. (New episodes return March 27.) This wasn’t merely an exercise in tying up loose ends; audiences saw the plot thicken for Gunnar in ways that even sweet Scarlett might not be able to smooth over.

The dynamic between Sam Palladio (Gunnar Scott) and Clare Bowen (Scarlett O’Connor) was among the more interesting points of Saturday’s panel. A native Brit Palladio landed the part of Gunnar via a webcam audition; flying to Nashville to start work on the show was his first trip to the States. The pair, who would become one of Nashville‘s key will-they-won’t-theys, met for the first time jet-lagged in their hotel to rehearse the sultry ballad “If I Didn’t Know Better” with legendary country singer and producer Buddy Miller.

According to Khouri, their demonstrated talent that day set the bar high. “Buddy called me right before to say, ‘Well, I’m gonna have to probably rearrange the song'” — a piece written by The Civil Wars that included some daunting falsetto for Palladio — “and I said, ‘Buddy, whatever you think is best.’ About an hour and a half later, he called to say, ‘Ok, they can sing it,'” she laughed.

Bowen, an Aussie who picked up her character’s Southern accent from videos her flight attendant father brought home from his travels, including Song of the South (yikes) and Fried Green Tomatoes, said it was “validation” to earn Miller’s vote of confidence after getting kicked out of opera class in school and being told she couldn’t sing. “That’s what we’ve had the whole way, being supported and being pushed and pulled with the utmost generosity… by these people who know exactly what they’re doing. That’s been one of the biggest things for Scarlett,” Bowen said. “She and I are going through the same thing, almost at the same time.”

Hayden Panettiere, who plays country poptart Juliette Barnes, had her own insecurities to overcome while launching into her character’s stardom. Surprising for an actor who’s been working steadily since the age of 7, Panettiere said stage fright posed a serious challenge in the beginning, tempered only by the guidance of producer T Bone Burnett.

In fact, all of the cast members had praise for Burnett, the show’s executive music guru (and Khouri’s husband). “He’s like a music whisperer,” Britton said after explaining how he contributed almost as much as Khouri in developing Rayna’s character. “You talk to any actor who’s been able to have the great, great fortune to work with him, and they will tell you the same thing. Boy, we all got hit by the lucky stick.”

Charles Esten, who plays Deacon Claybourne, piped up: “I’ve seen so many award shows and I don’t know how many times I’ve heard people say, ‘I wanna thank T Bone Burnett…’ I think for each of us, there was that moment in the studio where we go, ‘I get it. I get what they were thinking.’ So, thank you, T Bone Burnett.”

The cast was less forthcoming with details about future storylines. No doubt the show will keep up its trademark drama, which Britton said was subtle compared to the stories she’d heard from industry folks around Music City. On-tour tension in the Rayna-Deacon-Juliette triangle could easily carry the show on its own — don’t get us started on that elevator kiss. “It’s textured,” Esten said of his character’s relationship with Rayna. “We have this deep, old, abiding, undeniable love. She’s the one for me… But that doesn’t necessarily mean it’s going to work out easily.”

Meanwhile, there’s the forever foiled romance between Scarlett and Gunnar. “It’s been kind of a series of knee-jerk reactions,” Bowen said of their trajectory so far. “They function normally and haven’t ever really stopped and looked at each other and gone, ‘Oh, it’s you.’ We’re waiting for something like that… Maybe.”

Suffice it to say their eager fans are, too.