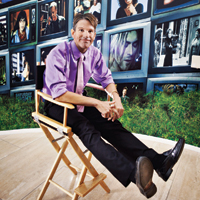 One of the best things about the Paley Center for Media’s annual television festival is that you never know who’ll pop up onstage. Sure, PaleyFest announces the shows it’s heralding—this year’s run the gamut from New Girl and Mad Men to Sons of Anarchy and Modern Family—but inevitably once the panels begin, somebody unexpected ambles in. Last year, for example, Rene Reyes, the center’s director of public programs and festivals, decided to reunite the people behind Judd Apatow’s popular series Freaks and Geeks and Undeclared. More than 30 cast members were invited, but since many had gone on to bigger things and both shows were long off the air, it was unclear who’d make it. Most did, including Seth Rogen, Jason Segel, Busy Phillips, and even Amy Poehler, who’d had a small role. “Just to see the camaraderie among all those people—it was one of the most memorable nights I’ve ever had the pleasure of putting together,” says Reyes, who has been producing the TV fetes since 2006. “I was like, ‘I can’t believe this is actually happening!’  ” That kind of enthusiasm fuels the event, which runs March 2 to 14 at the 1,900-seat Saban Theatre in Beverly Hills. No wonder audience members fly in from as far away as France.