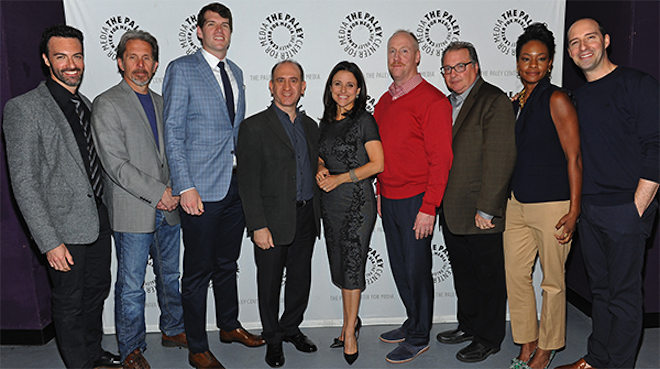 Julia Louis-Dreyfus stole the show at last night’s PaleyFest panel for HBO’s Veep, which was hosted by Hollywood Reporter senior editor Stacey Wilson. After a preview of the next season—yes, as billboards suggest, Louis-Dreyfus’s bumbling second banana, Selena Meyer, is running for president—eight members of the cast sat down to entertain an almost full audience inside Hollywood’s Dolby Theatre. Perhaps because Veep is only entering season three, there was little of the banter and camaraderie you often see from a cast that’s worked closely together. This was the show’s first time at PaleyFest.

Everyone clapped when Louis-Dreyfus walked on stage, glittering with diamonds on her ears, neck, and wrists. There were also loud cheers when Tony Hale—who’s perhaps most famous for his role as Buster in Arrested Development—sat down. Reid Scott, who plays his nemesis Dan Egan and on Veep, joked with the 6’5” Timothy Simons, who plays Jonah Ryan, about all of the tall jokes he came up with for Jonah. “I am always delighted when someone comes up with a new tall joke that I haven’t heard, and this happens on nearly every episode,” said Simons. His favorite Jonah insult is “Jolly Green Jizz-Face” followed by “human scaffolding.”

Is Veep proof that the rest of the world understands American government better than American voters? The HBO comedy is written by a team of British writers based in London. It’s shot in D.C. and edited in L.A., making creator Armando Iannucci’s job that much more challenging. On doing research for the show, Iannucci recalled how he was able to get into the State Department by claiming to be with the BBC. Later, when Hillary Clinton, who was then Secretary of State, found out about the incident she had a team investigate and then ordered increased security inside the building.

As the show gained momentum, politicians reached out to meet with Iannucci and the cast, hoping to offer insight into the workings of American government. Iannucci says many people in Washington are fans of the show. Someone remarked to him that, “We watch House of Cards for the drama, but we watch Veep because it’s what really happens.”

Louis-Dreyfus said that when she recently met former POTUS Bill Clinton, he told her, “You know what the best part of your job is? No term limit.” On improvisation, Louis-Dreyfus said she appreciated it when Iannucci would shoot a scene and then say, “Ok, let’s do one loose now,” meaning the cast could riff on the writing. Louis-Dreyfus said that the thing she tried to do was to “stay as relaxed as possible, and in so doing, stuff happens that you wouldn’t conceptualize. Stay relaxed in order to be as present as possible.” Actor Matt Walsh, who plays a bumbling Mike McLintock, said that it was a relief to be comfortable with the rest of the cast so that “If you try something and it doesn’t work perfectly, they have your back.”

Was Veep always written for a female VP? Iannucci says yes: “We wanted to be forward-thinking.” The show is actually about everything but politics, which is why you’ll never see a real politician on the show—it would bring up too many questions about which way Selina leans and who supports her or who doesn’t. We don’t know if Meyer is a Republican or a Democrat; that’s by design. And we’ve never seen the president, though the longest running joke on the show is Selina Meyer asking her secretary Sue, played by Sufe Bradshaw, “Did the president call?” To which Sue always answers, “No, ma’am.” The show will probably never reveal a presidential figure, but when asked who he would cast in the role, Iannucci immediately said “Schwarzenegger.”  “I always pictured Gary Busey,” added Kevin Dunn.