Home Museums What L.A. Life Is Like for a Scientist Who Spends Months Digging... 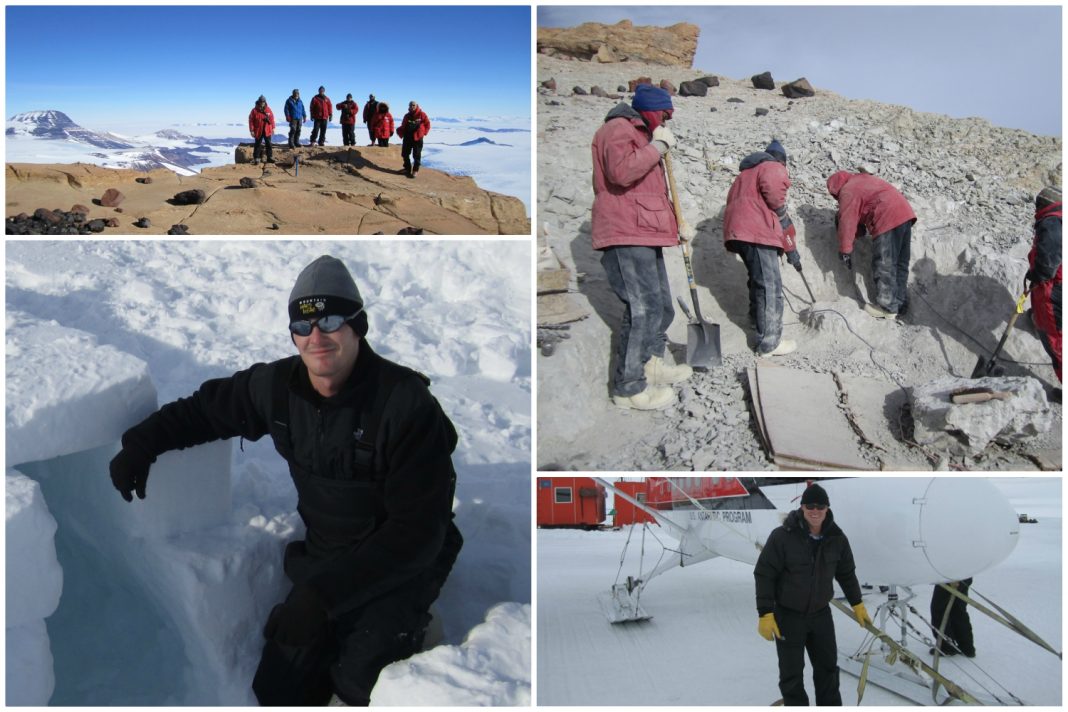 “I’m here to see a paleontologist,” I told a parking lot attendant and later a woman at the entrance to the Natural History Museum of Los Angeles. I realize it would have sufficed to say, “I’m here for a meeting,” but it’s not everyday you have an appointment with a bonafide dinosaur hunter, and I wasn’t going to let the moment pass unceremoniously.

The paleontologist of the hour is L.A.’s very own Dr. Nate Smith, the 38-year-old associate curator of the museum’s Dinosaur Institute. Along with the Field Museum’s Dr. Pete Makovicky, Smith is the star of the NHM’s latest exhibit, Antarctic Dinosaurs, which made its West Coast debut this week and runs through January 5, 2020. In addition to prehistoric discoveries, including the colorfully coifed Cryolophosaurus (this is the guy on all the banners around L.A.), Glacialisaurus (who Smith named), and two as-yet-unnamed species, the exhibit also focuses on the experience of the scientists and their months-long journeys to faraway frozen lands in search of fossils.

Smith guided me on a tour through the exhibit, gave me a peek inside the museum’s paleontology lab (full of even more dinosaur bones), and then let me pick his brain about the new exhibit and what life is like for a paleontologist in L.A.

You appear in illustrated form throughout “Antarctic Dinosaurs” and they gave you some seriously chiseled cheekbones. Was that your art direction?

To be honest, there’s a part of me that’s like, oh man, I don’t want this to be too much of the Pete and Nate show. I still cringe when I see myself on TV or in interviews. But I give the creative folks behind this exhibit a lot of credit because those illustrations work really well as a narrative device. This way, the exhibit isn’t just about the world in the past; it’s also about what it’s like to be a scientist and go to Antarctica and study this stuff today. The cheekbones are just a bonus.

Speaking of what it’s like to be a scientist today, I’m sure your work kept you busy digging up the bones of Cryolophosaurus, but what did you do during downtime in Antarctica?

If there’s great weather, there’s not a ton of downtime. But when there is, we’re usually cataloging, writing field notes, and crating things to be shipped. Other than that, we’ve done some volleyball and kickball games. On last year’s expedition, we had a big softball game on New Year’s Day. We also have movie nights, but those have to be offline. Last expedition we didn’t have Internet.

What’s a typical day like for you when you’re home in L.A.?

In the morning, I’ll have a little time in my office at the Natural History Museum, then I go teach a class at USC. After that, I come back to the museum and I might have a meeting with curators or exhibits folks, then a meeting with my staff in the Dino Lab.

What L.A. restaurant do you miss the most when you’re in Antarctica?

Rasselbock in Long Beach, which is where I live. It’s a German-inspired beer garden and they’ve got amazing schnitzel and potato pancakes. Their slew of diverse German beers is a nice contrast to the IPA-ization of the beer world today. They just opened a second location in Mar Vista.

Where do you and your colleagues grab a drink? Is there a paleontology hotspot in the city?

Every museum and each group of academics has their local spot. At the Fields L.A., there’s a big bar and arcade upstairs called Free Play. A group here at the museum has started doing Thursday happy hours there. Another one is The Lab—a little gastropub off USC’s campus on Figueroa. It’s a great place to grab a beer and sit outside. You’d have a good chance of running into someone from USC or the museum there—not necessarily a paleontologist, but a scientist…a nerd, in other words.

What do you drink in Antarctica?

More liquor than beer because beer often freezes and it takes up more space, so you have less allowance for that. You wanna bring the hard stuff down there.

For your last Antarctic expedition, you were gone nearly three months. What were you anxious to do as soon as you got back to L.A.?

My wife and I went to our go-to trivia spot, a little wine bar called the Willmore in the Bixby Knolls area of Long Beach. We won that night and I still had my Antarctica beard when they took our picture for social media.

Do you have to disclose to your fellow competitors that you’re a scientist? Because between you and your wife [who’s a successful attorney], you seem like an unstoppable pair.

No, we’ve actually been getting destroyed lately. My weak spot is any music post 1987 and anything pop-culture related.

Where do you shop for expedition gear?

For Antarctica, a lot of the gear is provided, like the tents and cooking equipment. Then, I usually stock up on clothes at Dick’s Sporting Goods in Cerritos as well as REI. We’re funded by the National Science Foundation, so we can’t really get sponsors. And even if we could, I’d be the guy wearing the hole-in-the-wall bar T-shirt in Antarctica. I don’t think it would be the big-money endorsement.

I don’t know, the way you’re talking up Rasselbock, I imagine they’d sponsor an expedition… to the La Brea Tar Pits, at the very least. Speaking of which, the Pits are an active dig site, right?

Oh yeah and it’s part of the museum’s campus. The Tar Pits are extremely unique. You have a huge active paleontological dig in an urban center. There are other institutions or museums that have been created around famous fossil sites, but they’re off away from city centers. Nothing else is like this, in the heart of a city. Literally across from a Starbucks.

My wife and I have been to Idyllwild a bunch of times. That’s a really beautiful place to kick back and hike. Within the greater Los Angeles area, my go-to is Point Vicente. We actually got married there, so it’s good for nostalgia, and there’s a museum with fossils, so it’s good for my nerdy side. Plus, there are fun trails and scenic vistas. When we first visited Point Vicente, I thought, oh, this is what people think about when they think of beautiful oceanside Southern California.

Other than the Natural History Museum, obviously, do you have a favorite L.A. museum?

I could go highbrow and say something like the Huntington, which is gorgeous, or I could go more hipstery and say something like the Museum of Jurassic Technology, which is worth checking out. It’s kind of an anti-museum—it really has nothing to do with the jurassic or technology. It’s one of those things I can’t explain; you just have to go. But rather than a traditional museum, I’d cheat and say the Last Bookstore. When people come visit and ask what to see, I always say, if you’re near downtown make sure you go there.

When I moved to L.A. from DC in 2015, I was surprised by how much this city is a cultural center of all these different museums. It almost feels like the names of museums are a Mad Libs—anything you could imagine to fill in the blank, there’s an actual museum for that.

What’s the most common reaction you get when you say you’re a paleontologist?

It used to always be, “Oh! You’re like Ross from Friends.” And even though that show is syndicated and popular on Netflix, I think it’s old enough that it doesn’t typically get brought up right away anymore.

Do we need another paleontologist in pop culture to replace Ross Geller?

I don’t know that I wanna roll that dice again. Back before Friends, when people talked about paleontology, they’d usually think of Indiana Jones, who was actually an archaeologist. Would I rather be compared to a sexy, cool adventurer or a whiny New Yorker? So yeah, if you have those options, you’re gonna choose Harrison Ford, right? So I fear that if we roll the dice again we might end up with something even worse…like, here’s a hip new show about Lloyd the paleontologist. He lives in his mom’s basement and complains about things in online forums on Reddit. 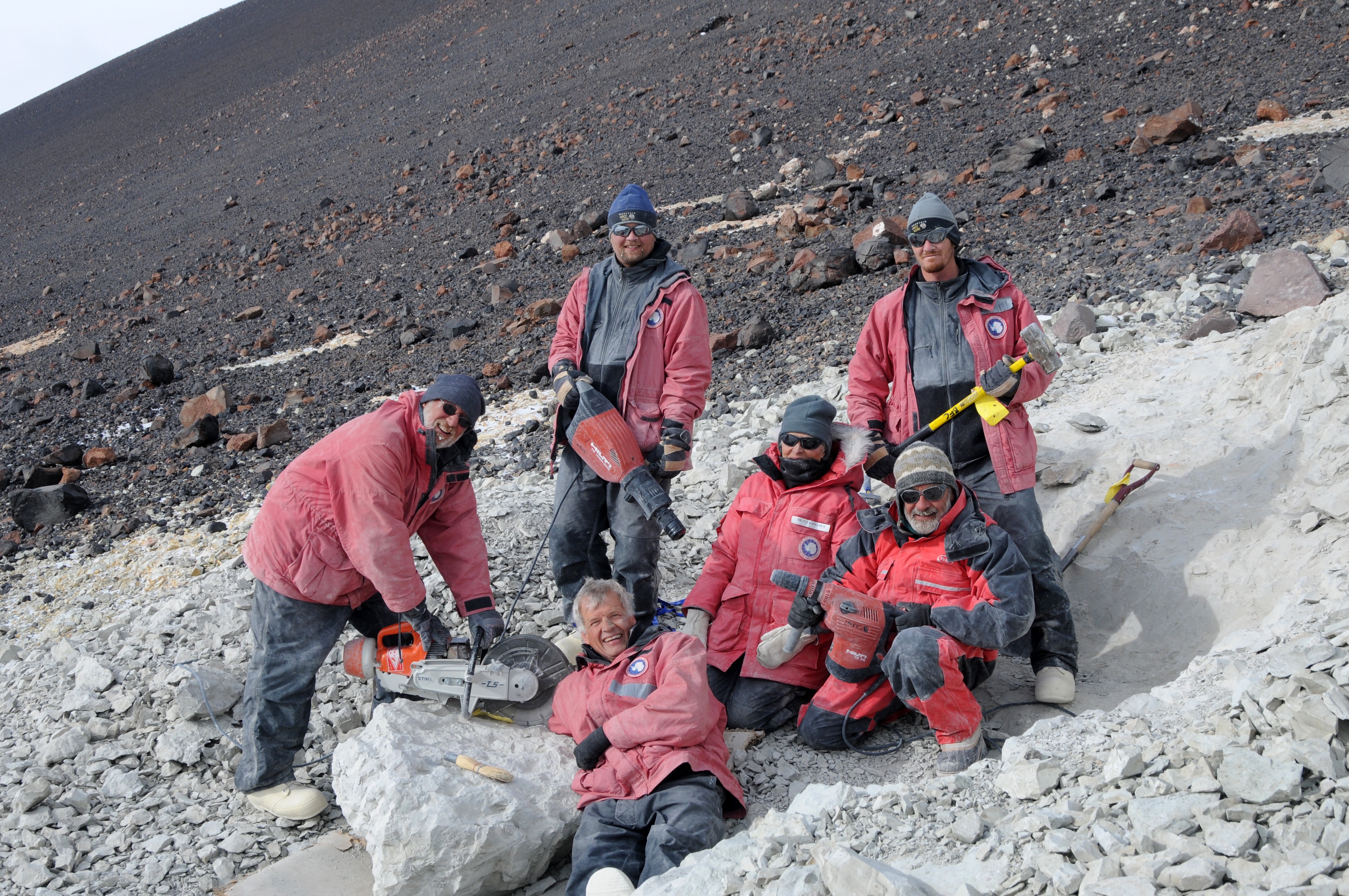 OK, we’ll leave paleontologists alone. What about dinosaurs in pop culture. Do you have any thoughts on the upcoming Jurassic World ride at Universal Studios?

I actually haven’t been to Universal Studios yet. My wife and I have our eyes more on the Harry Potter park. But I will say, there’s this cottage industry in paleo about beating up on the Jurassic Park franchise. But it’s a movie! And with Jurassic Park, they do have a lot of people who really try to get it right with the animal models and some of the science, but you also have to suspend disbelief and let them take artistic license. I don’t like to push up my glasses and get all nerdy and say, “Actually, this dinosaur would’ve been 16 feet from snout to tail.” Just enjoy it. It’s entertainment. It’s like with Weekend at Bernie’s… I know that guy would’ve been decomposing and stinking and rigor mortis would’ve set it. But that doesn’t mean I’m not gonna enjoy the movie.

Do you ever browse the museum gift shop? Do you own dinosaur taco holders?

I don’t have the taco holders, but I regularly buy magnets and T-shirts to give out as little gifts. Maybe this will blow my cover, but it’s a great stop if I’ve forgotten a gift. Not for my wife! She’s never gotten like an anniversary dinosaur bib. But maybe for a lesser holiday, like Flag Day, I’ll get her something from the gift shop.

Not in Antarctica… that won’t happen again for a while. But we go to Ghost Ranch in New Mexico every summer. There’s also a trip to Utah, where the big dinosaurs are from, that happens each summer. It’s in southeastern Utah, by Bluff. It’s a really pretty area…not far from Monument Valley.

When you walk through the halls here at the museum, does it ever get old seeing little kids lose their minds with excitement over dinosaurs?

When it’s the right kind of excitement it does jar you back. This is a job for me, so it’s easy to lose sight of that. Plus, when I walk through the halls here, I can’t stop for 20 minutes each time and be like, “Oh, fucking A!! Look at this!” But it is important to have that excitement refreshed by living vicariously through other people every once in a while. When we go out into the field, collecting dinosaurs almost becomes routine sometimes, but it helps to constantly bring in new volunteers and students. You get to watch them experience it all for the first time and remind yourself, yeah, this is a job, but it’s really cool, too.

Antarctic Dinosaurs is on view now through January 5, 2020, at the Natural History Museum of Los Angeles.

Fascinating Objects Tell the Story of L.A. in This Revamped Exhibit