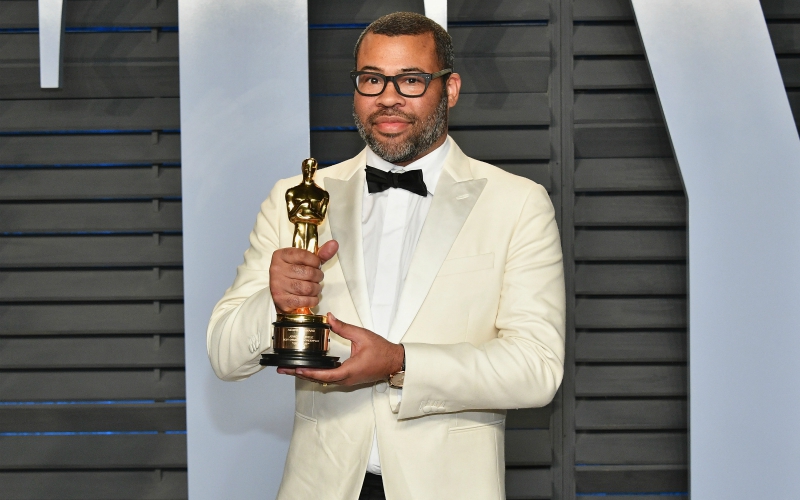 At last night’s Oscars ceremony, comedian-cum-writer-director Jordan Peele walked away with a statuette for penning the year’s Best Original Screenplay, his terrifying, funny, hyper-timely horror flick Get Out. Horror movies are seldom critical darlings, but Get Out—about a black man who goes home to meet his white girlfriend’s family—is the rare exception, sitting pretty at 99 percent on Rotten Tomatoes since its release last February. In fact, a horror has never been recognized for Original Screenplay. In 1992, Ted Talley won Best Adapted Screenplay for Silence of the Lambs, and before that, in 1974, William Peter Blatty won the same award for The Exorcist. (In 1969 Rosemary’s Baby was also nominated for Best Adapted Screenplay, but Roman Polanski was beat out by James Goldman for The Lion in Winter.)

Of course, Peele’s win was also notable for another reason: he’s the first black writer to win Best Original Screenplay. And it only took 90 years for the Academy to come around. During his backstage interview, Peele talked about being part of what feels like a movement toward inclusivity for black filmmakers, touching on the important role representation plays in inspiring young people of color.

“I almost never became a director because there was such a shortage of role models. We had Spike, we had John Singleton, we had the Peebleses, we had the Hughes brothers, but they felt like the exception to the rule. I’m so proud to be part of a time, the beginning of a movement. Where I feel like the best films in every genre are being brought to me by my fellow black directors. It’s very special and I think it goes for all areas of inclusion. But I think it’s quite clear with the work that Ava [Duvernay] is doing, that Ryan [Coogler] is doing, F. Gary Gray, Barry [Jenkins], that this is  a very special time.”

He later said, “When the nominations for this came out, I had the amazing feeling of looking at the 12 year old you had this burning in my guts for this type of validation and I instantly realized that an award like this is much bigger than me. This is about paying it forward to the young people who might not believe that they could achieve the highest honor in whatever craft they want to push for. You’re not a failure if you don’t get this, but I almost didn’t do it because I didn’t believe there was a place for me.”

Meanwhile, Frances McDormand won Best Actress for her performance in Three Billboards Outside Ebbing, Missouri, and gave an energetic speech that she wrapped up by saying, “I have two words to leave with you tonight, ladies and gentlemen: inclusion rider.”

Twitter immediately lit up, and once everyone was clear that she’d said “inclusion rider” not “inclusion writer” (although that sounds nice too), explainers about the contractual clause (also known as an equity rider) began popping up online. McDormand elaborated in a backstage interview, saying, “I just learned about this last week. There is and has always been available to everybody who does a negotiation on a film an inclusion rider, which means you can ask for, and/or demand, at least 50 percent diversity in not only the casting but also the crew. And so the fact that I just learned that after 35 years in the film business, we’re not going back.

She continued, “The whole idea of women ‘trending,’ of African Americans ‘trending,’ no. No trending. It changes now. And I think the inclusion rider will have something to do with that.”

Now it’s out there and the onus is on performers and producers to continue to build on the progress toward inclusion that’s already been made. The next generation of writers and directors and actors is watching.