Home Film As the Oscars Approach, These 3 Movies Rise Above the Rest 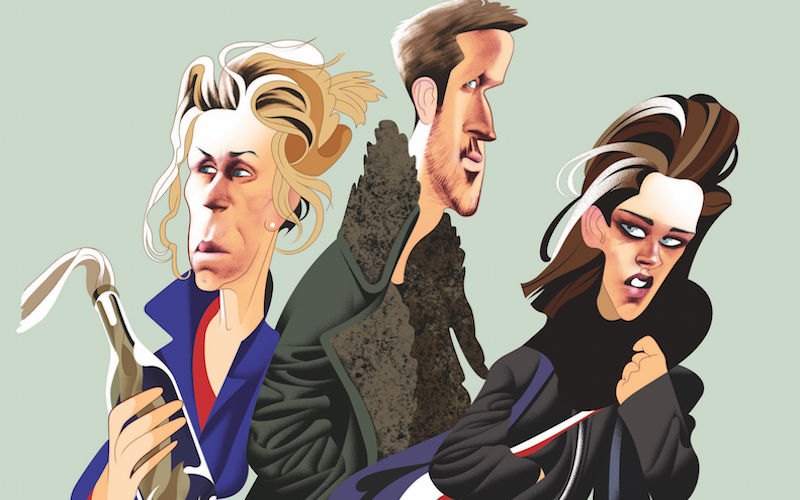 In 1982 no one thought Blade Runner was the year’s best picture. On its initial release the Ridley Scott future-noir was rejected both commercially and critically; only over the decades that followed did its reputation grow as the most influential film of our time. “Science fiction” in 1982 meant E.T., released the same year, and Return of the Jedi, released the next year, and while Blade Runner was nominated for two Oscars (visual effects and art direction) that it lost, the big awards went to Gandhi, Missing, and Sophie’s Choice, none of which you’ve watched since whenever you last watched Blade Runner, and none of which you recall even as you recall Blade Runner vividly. Last year’s sequel, Blade Runner 2049, won’t win a best-picture Oscar either, nor will Personal Shopper, released early enough in the calendar to be forgotten, nor even Three Billboards Outside Ebbing, Missouri, in all likelihood. But these Three Movies Outside Everything Else were the year’s most unique, defying the formulas of their genres to present portraits of despair masquerading as a sci-fi thriller, a ghost tale, and a crime saga.

In Personal Shopper, a star’s young fashion assistant is haunted by the recent death of her twin brother as well as the heart defect she shares with him. When she’s overtaken by the events of a homicide, she begins receiving texts from somebody or something always watching, even on the Chunnel from Paris to London. In Three Billboards, a mother is haunted by the rape and murder of her daughter. When she erects a series of road signs taunting the town’s sheriff and deputy over their failure to solve the crime, her pursuit of justice takes on a violent life of its own. In Blade Runner 2049, a man who knows he isn’t a man, in love with a woman he knows isn’t a woman, is haunted by a sense of humanity he knows isn’t human. When he tracks down a memory he knows that he never actually lived, he finds himself stranded on the shoals of the unremembered, wondering about his own nature.

This year presents the Oscars with a time-honored dilemma not unlike the one that moved Academy voters in 1982 to honor Gandhi, a stodgy biopic of the man who liberated India through nonviolent protest. What to do with a mediocre movie that makes a crucial, even grand statement at a historically urgent moment? The movie in this instance is The Post, the early Oscar front-runner, and the historical moment is one in which a determined press often seems the only thing standing between the truth and an ascending authoritarianism that would rewire our understanding of truth to its own ends.

So let me be clear that my ambivalence about The Post is complicated. I admire the resolve that moved director Steven Spielberg to turn the project around in less than a year. I’m even willing to make allowances, up to a point, for the director’s most ineptly made feature since 2004’s The Terminal. Besides the preachy exposition and dramatic climaxes that crumple under the filmmaker’s heavy hand, maybe only somebody old enough to have been around in the mid-to late 1960s will be cranky about stagy street demonstrations, characters calling problems “issues” when nobody talked like that then, and a muddled timeline that has songs nobody had yet heard and posters on the walls for movies that hadn’t yet been released—one lapse after another that kept taking me out of the story.

The question is whether cumulative shoddiness undermines The Post’s credibility and thereby its moral authority. Of course these things are subjective: I know smart people for whom Harrison Ford’s appearance takes them out of Blade Runner 2049, for whom the refusal of Personal Shopper to be just a murder mystery or just a meta-physical meditation underscores a sense of disconnection from either, for whom the farcical shifts within Three Billboards’ larger tragic framework sabotage both the farce and the tragedy. But guess what? None of those smart people is writing this column!

The dimmer columnist thinks Blade Runner 2049—by way of a screenplay cowritten by the original film’s cowriter, Hampton Fancher—is to the first groundbreaking film what The Godfather Part II was to its predecessor: a logical expansion on it, rather than a mere recycling. Though they couldn’t be less alike otherwise, a common magnanimity of spirit lurks in Blade Runner 2049, Personal Shopper, and Three Billboards Outside Ebbing, Missouri, with cyber-age orphans, wandering sisters, and grieving mothers all searching for reckoning and redemption, two words we’re likely to hear more of in 2018. These three very different movies depict the human condition at its loneliest, and in this deeply alienated time when the social contract is unraveling, that constitutes a historically urgent statement as well.

RELATED: Who Should Really Win at the 2018 Oscars

Here’s How the World of Blade Runner: 2049 Really Came to Life

The Adaptation of J.G. Ballard’s High-Rise Challenges the Notion of What’s “Unfilmable”

Ryan Gosling is Signing Up for the Blade Runner Sequel