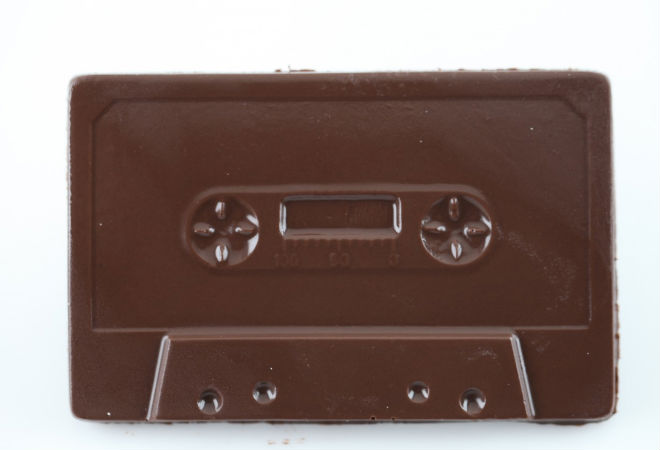 Sculptor Marcus Gray has always been a student of life. As a young man travelling the country he dove into the study of religion, philosophy, and culture. But it was the hip-hop culture, Gray had grown up with in his native Englewood, Colorado that would eventually lead to the revelation he had one night in 1999. “It occurred to me that hip-hop is a religion,” he says. “Hip-hop raises children, shapes perspectives, and helps refine consciousness. It can be a powerful tool that can shape human evolution.” Fast-forward to 2014 and Gray, 38, has combined his dual interests in a single medium: chocolate.

Gray’s line of Original Hip Hop Chocolates features miniature boomboxes, turntables, microphones, and spraycan nozzles crafted in chocolate. Since launching the business in 2009, his edible treats have earned the sculptor plenty of attention. “It’s crazy right now,” Gray says about the popularity of his treats. “Most of my life I’ve been a bit of a philosopher, but now I have to get really grounded and learn how to be a business man as well. Sometimes I feel like Jekyll and Hyde.”

We talked to the self-taught chocolatier and hip-hop evangelist about edible symbolism, turning his ideals into a sustainable business, and the power of hip-hop culture.

★ Gray, who relocated to L.A. in 2000, didn’t start using chocolate as a medium until 2007 when, for an exhibition, he designed “Chocol8 Box Cutter,” a box cutter similar to the ones used by the 9/11 hijackers.

★ “That was really what started me down the path of using edible symbols. The idea of taking a cultural symbol and making it edible, just like the Catholic communion does, appealed to me. I wanted to create meditation points that allow you to reflect on hip-hop culture.”

★ Since introducing his chocolates, something Gray did by selling them from a cooler outside of L.A. hip-hop clubs, he has received nothing but positive feedback from people within the hip-hop community.

★ “There are artists who think of it as a great product,” he says, “and then there are people like Kendrick Lamar, Afrika Bambaataa, and KRS-One who just got it right away.“ KRS-One’s reaction really resonated with Gray. “He said, ‘Oh, my god. I can put hip-hop in my body now.’ It gave me chills to hear because that is absolutely my intention with it.“

★ These days Gray works with a team of helpers and has moved his business into an industrial kitchen in Pasadena, even though he still does the majority of his work out of his Mt. Washington home. He recently branched out and began making hard candies.

★ Gray is currently trying to get his products into Urban Outfitter stores and hopes that Original Hip Hop Chocolates will one day be a worldwide phenomenon. “Hip-hop is my belief system,” he says. “I want to give people the opportunity to interact with it on a visceral level.”

Chocolates for V-Day Never Go Out Of Style. Here’s 7 We Recommend