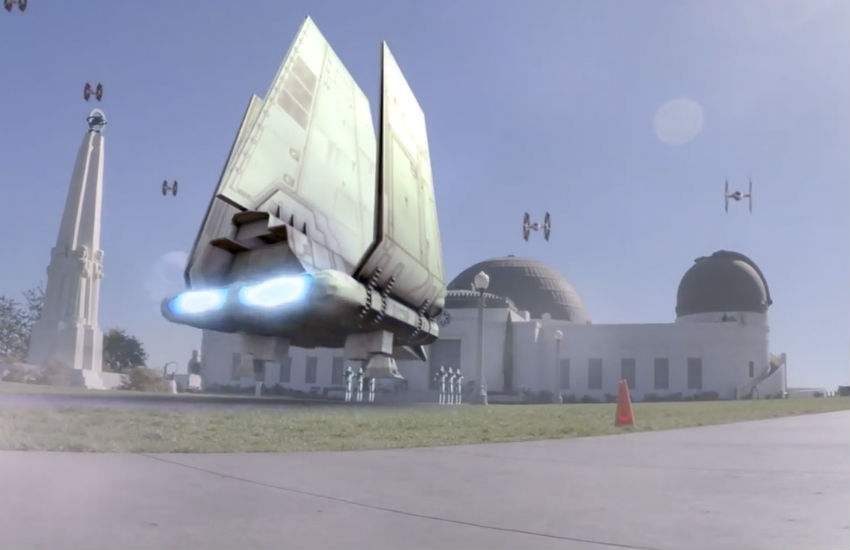 If you’ve ever wondered what L.A. would look like if aliens invaded, you’re not alone. An animated video published on YouTube today shows L.A. being overrun by Empire fighters, giant spaceships, and stormtroopers straight out of Star Wars. Cars explode, buildings are leveled, and the Griffith Park Observatory is turned into Darth Vader’s new lair. We reached out to Kaipo Jones, creator of Star Wars: Invasion L.A. to ask him about his short sci-fi flick.

Who made this film?
I, Kaipo Jones, shot and animated this video. My friend Rory O’Donnell helped me produce a few shots, but the majority of the work was done by me. As for the entire audio mix, my other friend, Luke Bechthold, did that. The models are from a site called scifi3d.com, where a community of Star Wars fans upload models they’ve created.

Why did you make it?
It was more of an experiment than anything. I also needed a break from my cat videos. [Which you can see here:  Wolverine Cat, Magneto Cat.] That and the fact that I haven’t done a Star Wars video before. It seemed like time. Especially with the new film coming out.

How long did it take you to put this together?
I started shooting right before Christmas last year. It took about 2-3 months of VFX work, in between jobs, and probably another week for Luke to do the audio.

How did you select which L.A. Spots to feature?
I just asked myself, “What are the most iconic spots in L.A.?” So, mostly touristy spots. But I also wanted to show famous locations that are used in a lot of movies like the Vincent Thomas Bridge, Grand Avenue, amd the 2nd St. tunnel.

Which L.A. Landmark would you most be disappointed to see destroyed in an invasion?
Tough question. I would have to say the Chinese Theater, because it represents L.A., Hollywood, and cinema from the Golden Age and would be harder to replace than something like the Hollywood Sign.