Home Books Dispatches from the Front Lines of Househusbandry: A Q&A With Christopher Noxon 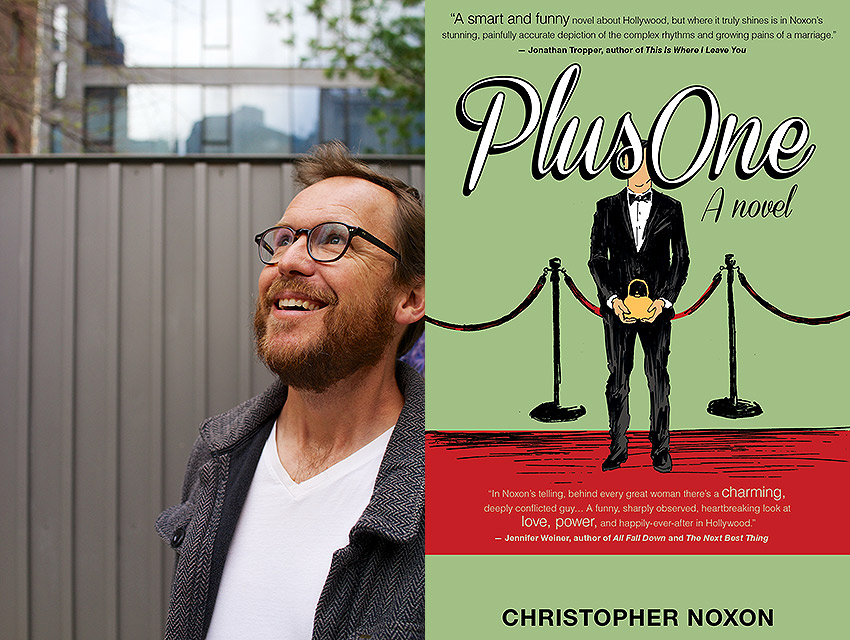 It’s not an autobiography or a roman à clef, but Christopher Noxon’s Plus One (in stores now), the tale of a househusband coping with the reality of having a breadwinning wife, does hit close to home. The L.A.-based writer and freelance journalist is married to Jenji Kohan, the TV scribe/mastermind behind shows like Weeds and Orange Is The New Black. The book isn’t a diary of his life (which, yes, does involve such caretaking duties as car pick-up, laundry, and cooking for his three kids); rather, it’s more a sampling of what people in his position are prone to do.

The book reads like a series of intimate conversations about the inner workings of family units. It exposes the unvarnished truth about how people struggle to make ends meet (even when things are pretty nice). Noxon says he wanted his written conversations to sound like the things you might say to your partner on the way home from a party, and he’s successful. With a faux behind-the-scenes sleight of hand, Noxon’s protagonist Alex experiences the caretaker role in a way he hasn’t before, forcing him abandon his post as marketing guy and trade it in for family guy.

Plus One details how Alex and the other “plus ones” (men whose wives or dates are the primary invitees to a prestigious event) come to grips with the shift. Here he discusses gender inequality, the difference between fact and fiction, and how he thinks the model of the traditional family can—and should—be malleable.

Once he comes to grips with being a plus one, Alex has a mid-life crisis. He begins writing a memoir of sorts. Does your writing process differ from Alex’s?
That was a little meta, and maybe a little cute, because I was winking at the reader. Alex goes from writing a memoir to writing fiction, and I had a similar turn when I was writing this book. I wrote a couple of essays, one about going to the Emmys with my wife and having my shoes fall apart and another about being married to a TV writer. I was thinking about writing a book of essays about househusbandry and caretaking, but I stopped and asked myself, do I even want to read that book? I didn’t. Our family’s life is pretty uneventful. I wanted to read a book and write a book that felt unlike my last book (Rejuveniles), which was a chin-strokey, heavily reported, quasi-sociological story. So it became fiction, and I invented this character that was sort of like me, but not really me, and I invented a wife who was sort of like my wife, but not my wife, and kids that are not at all like my kids. With Alex, I was trying to take all of my insecurities and anxieties to the most dramatic ends I could think of.

In the book you write, “He could create an alter ego who’d be free to do all the stupid, risky, impulsive things Alex himself never did. But that would mean he’d be writing—what? A novel? And who read novels anymore?” I loved this quote. It made me think, Bingo! that’s partly why we write. Was this book liberating for you in the same way?
That’s more a question for my therapist [laughs]. But it did force me to push myself into situations I have not myself experienced. The whole question of the book is: Is this family going to make it? Raising kids and maintaining a healthy marriage when one person is really successful, especially a woman, is hard. I’m surrounded by stories of families that don’t make it. In some ways it was a thought exercise: what is the fight that Jenji and I would have a very hard time coming back from? I had to invent a crisis that my family has not experienced. Was that liberating? I had my mid-life crisis on the page so I wouldn’t have to have it in real life. There’s so much score keeping that goes on in L.A. and in marriages, and of course we all know the ultimate answer is to stop keeping fucking score and take care of the people around you. I discovered that through tracking Alex’s conflict, and it reinforced in me a sense of security and acceptance.

There’s a mix of fact and fiction in here in terms of popular actors and shows and locations. How did you determine where to draw the line between real and fake?
The one time I thought about a formal rule was regarding place names. I felt like the places should all be based on real places but have invented names. If a reader is familiar with L.A., there are plenty of places they’ll recognize. It’s a fun reward. Part of the reason I wrote the book was that I love L.A. I’m a native, my wife is a native, my kids are natives. I’ve spent my whole journalism career writing a lot about Los Angeles, and I wanted to write a version of L.A. that I hadn’t read before. One which is show business adjacent; the kind of world you see in Jill Soloway’s Transparent. It’s a family trying to get by in regular-world Los Angeles where someone is sucking off the show business teet.

I noticed that the approach-avoidance conflict—the tug of war that results when a goal is both desirable and undesirable—is a pretty major theme.
That conflict is especially endemic to Los Angeles because we’re constantly being fed the fruits of labor and the fruits of success. Carrots are dangled in front of our noses all the time, but do we really want the fancy car or the house on the hill or the reverse-osmosis swimming pool or the Salvadorian nanny or the pro-biotic diet or the yoga classes? Alex is a guy who’s raised anti-bougie. I wanted to highlight how he reconciles that with the world of the privileged. It’s very difficult for those guys to come to peace with having money and success. Once they achieve those things, they freak out and blow up their lives. They’re still crazy, they’re still unhappy, they still have the same neurotic thoughts rattling around in their head.

What’s the solution?
It’s like writing. I love having written more than the process of writing, but really it’s all about the process, not the euphoric feeling that comes with finishing a piece. The same is true of life: It’s the journey, not the destination.

What I like about this book is that there are so many universal, recurring themes about retaining your personhood and being self-possessed. But then there’s also the idea of sacrificing yourself for the greater good of a family. Alex’s job on vacation, for example, is not to enjoy himself, but to make the vacation worthwhile for his wife, Figgy, and the kids. How has the idea of being a good family man changed in your opinion?
With more women becoming primary breadwinners and assuming positions of power, men are struggling to learn how to become graceful support players. I think it’s essential that men deal with this in a really open, honest way. There’s a toxic cultural stereotype that men can’t be caretakers; there’s this assumption that, boiled down, guys are just knuckle draggers who want to stand on top of a mountain and have their woman chained next to them wearing a bikini. I reject that. There are biological differences between men and women, but we have to give men more credit for their ability to adapt to the caretaker role. I feel blessed to have that role with my kids and my wife, to be around for my kids in a way that my parents weren’t around for me when I was little, and to creatively enable my wife—that’s a huge privilege. That the culture sidelines men and isolates them and disparages that work is a real bummer and something that we’re going to have to change if men are going to do this job well. Men can be natural caretakers and the world has got to stop assuming that we’re all threatened and emasculated in that role. I’m a superfan of guys retaking the kitchen. Cooking has become so macho, but not so much with laundry. We haven’t figured out how to masculinize laundry or car pick up. [Laughs.]

Obviously Jenji is dealing with the flip side of this. The Center for the Study of Women in Television and Film published a report in the fall that said women are still vastly underrepresented in the entertainment industry, and their roles both onscreen and off-screen are actually decreasing (not getting better). I would imagine this is something your household talks about. As someone with close proximity to the industry, how do you see Hollywood’s gender imbalance changing or not changing?
Jenji gets really pissed off about this stuff, and I’m much more prone to say, look at our lives! Our lives are awesome! But as someone who’s created two hit shows, Jenji would be getting very different opportunities and deals if she were a man. Even in success, women are treated differently than men are. It’s horrendous.

Jenji was the lone female hire on her first few shows. They had to have one woman in the room. I think that’s still true on a lot of TV shows; it’s still a boy’s club to a great extent, and then you have these kind of outliers, like Jenji, like Shonda Rhimes, like Jill Soloway. Clearly there are these kind of powerhouse women who are changing the hiring dynamics. Hopefully with their success, things will accelerate.

L.A. Charities Fighting for the Rights of Incarcerated Women Are Getting the “Orange Is the New Black” Bump