Home Film In “Once Upon a Time in Hollywood” Tarantino Recreates the Lost L.A.... 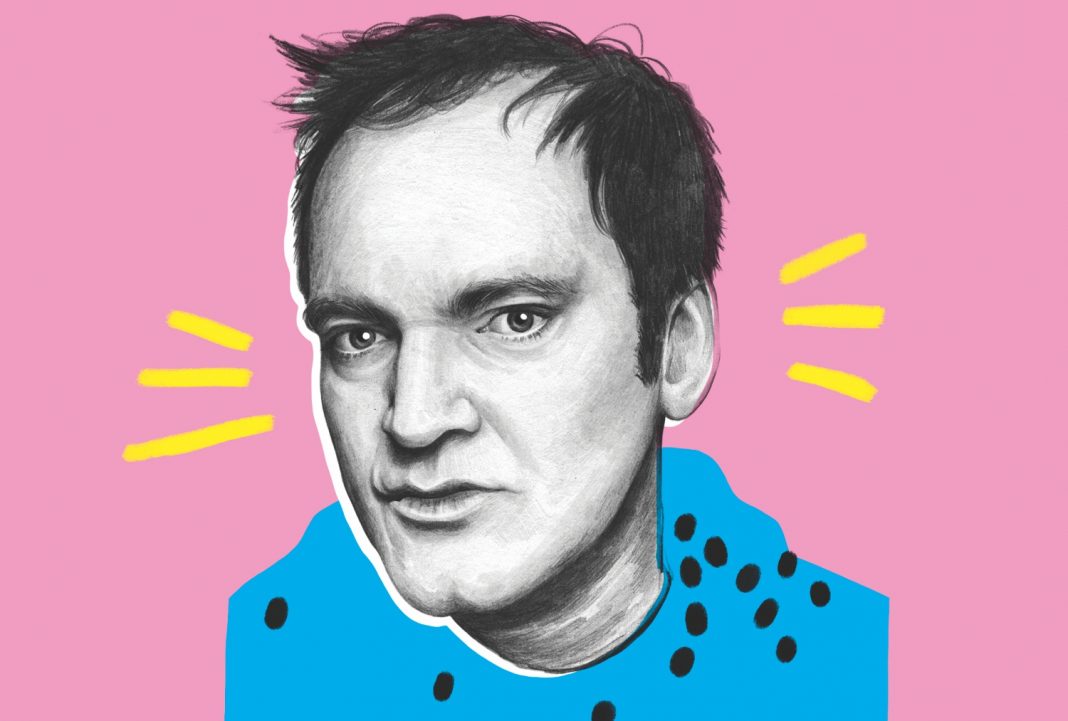 Quentin Tarantino’s Once Upon a Time in Hollywood takes place over the course of three days in 1969. Recalling the director’s breakthrough Pulp Fiction a quarter of a century ago, with its interweaving and linearity-defying plotlines, these three days aren’t sequential by the standards of the calendar or dramatic storytelling. The climactic evening is the one when the Manson Family murders, among others, film star on the rise Sharon Tate, played by Margot Robbie. Tate’s next-door neighbor is Leonardo DiCaprio, a TV star on the decline who’s even more bewildered by the increasing fade-outs and jump cuts of his own identity than Hollywood is by the sex, drugs, and rock and roll that are defining the era. If any of the lead characters in Tarantino’s picture has a sense of who he is, it’s Leo’s stand-in and stunt double, Brad Pitt, who understands Leo’s character better than the character himself. Like the city to which it’s an homage, the movie is bleached in a sunlight more blinding than clarifying, which for many in Los Angeles is the only kind of sunlight there is, at least until night falls and the blood flows.

Tarantino’s Hollywood is no less an imagined place than William Faulkner’s Yoknapatawpha County or Gabriel García Márquez’s village of Macondo. It’s the L.A. of someone who, like the rest of us from L.A., has never really lived in any L.A. that’s more identifiable than a name on a map. In Tarantino’s 1997 movie, Jackie Brown, gunrunner Samuel L. Jackson recounts to partner Robert De Niro how he just picked up a girl arriving from the sticks on a bus and has ensconced her in an apartment in Compton by telling her it’s Hollywood. In her head it’s Hollywood in the same way the Torrance Pussycat Theatre was Hollywood in Tarantino’s head when he was a teenage usher there. Tellingly, of the movies Tarantino chose for Sight & Sound magazine’s most recent all-time best movie poll, not one is an L.A. movie unless you count The Bad News Bears, shot in the San Fernando Valley. No Sunset Boulevard, no Double Indemnity, no Singin’ in the Rain or Chinatown or In a Lonely Place or Blade Runner or any of an endless list of noirs where L.A. is a character. Rather, Tarantino’s pantheon is found on the steamy streets of Manhattan (Taxi Driver) and the island resort beaches of New England (Jaws), in East Coast metropole newspaper offices (His Girl Friday) and Nazi Germany POW camps (The Great Escape) and Vietnam jungles (Apocalypse Now) and on Civil War battlefields (The Good, the Bad and the Ugly).

The two filmmakers who had the most formative impact on Tarantino lived and worked 8,000 miles from L.A. A film geek before anyone knew what postmodernism was (assuming anyone ever has or wanted to), French director Jean-Luc Godard makes movies as much about movies as anything else, in the process dabbling in all the genres that captivated him, from noir to melodrama to science fiction. Godard’s mid-’60s Bande à part is a heist movie with elements of screwball comedy and the musical, something to remember not only when Pulp Fiction breaks from its mayhem long enough for John Travolta to dance with Uma Thurman, but when realizing the name of Tarantino’s production company is A Band Apart. After the phenomenon of Pulp Fiction, Tarantino went genre dabbling on his own, indulging all his cinematic crushes, including blaxploitation, westerns, war pictures, grind-house horror, antebellum gothic, and samurai vengeance extravaganzas, the best of which is the 2003-04 two-part Kill Bill and the worst of which is The Hateful Eight, the only Tarantino project that flirts with boredom. Tarantino’s other crucial influence is Sergio Leone, an Italian filmmaker enamored of mythic America on an operatic scale. The fairy-tale implications of titles like Once Upon a Time in the West and Once Upon a Time in America are no more accidental than the latter film’s sense of reverie that overtakes Robert De Niro in an opium den on the Lower East Side.

For all its claims to the specificity of 1969, Tarantino’s movie is a mishmash of a time and place that were changing by the minute and the mile.

Once Upon a Time in Hollywood is a similar fantasia of L.A. and the 1960s. For all its claims to the specificity of 1969, Tarantino’s movie is a mishmash of a time and place that were changing by the minute and the mile: In 1969, when Tarantino was six, I was starting out at UCLA and can bear witness that there were in fact four or five ’60s, each getting subsequently darker and darkest. So one scene in Once Upon a Time in Hollywood is the Day-Glo Hullabaloo ’60s with miniskirts and pervasive grooviness, while the next is the post-assassination Altamont ’60s when the bloom was decidedly off the decade’s rose. Once Upon a Time in Hollywood bears no more resemblance to the reality of its moment than Leone’s movies do to theirs, or than Tarantino’s 2009 Inglourious Basterds does to the reality of World War II. If it did, the central figure of the story, as she should have been anyway, would be Robbie’s doomed Tate rather than doofuses Pitt and DiCaprio. Tarantino gets away with all this, in part, because the Hollywood of 1969—when Musso & Frank’s was barely hanging on, serving its Thursday chicken pies, and hardly the teeming industry watering hole where agent Al Pacino holds court—was in its own time slip, two cultural tectonic shifts behind the times and still scrambling to catch up with European cinema’s New Wave even as that was already overtaken by the counterculture. The bigger knock against Once Upon a Time in Hollywood is that Tarantino doesn’t surprise us much anymore. Anyone watching Mean Streets when it came out would have been startled to know that a dozen years later Martin Scorsese would be making The Last Temptation of Christ, while anyone watching Pulp Fiction when it came out could have figured that, seven pictures later, Once Upon a Time in Hollywood would be the result.

And who cares, right? No other American director is a brand unto himself like Tarantino, and any brand has its limits; it’s probably not an accident that his best movie, Jackie Brown, is the one adapted from someone else’s source. None of this means Tarantino is a formulized hack—he believes in every frame—and authenticity can be the enemy of audacity. If Tarantino can rewrite the demise of the Third Reich as taking place in an infernal Parisian movie theater, he can score his ’60s’ demise to Neil Diamond, especially given that Scorsese already has usurped the real soundtrack of 1969, the Rolling Stones’ “Gimme Shelter,” three or four times over. Once Upon a Time in Hollywood is the conclusion of Quentin Tarantino’s L.A. Trilogy, following its middle chapter of dimwits thinking they’re in Hollywood when they’re in Compton, and bringing everything back around to where we began a quarter century ago. Pulp Fiction was the map, a tour of all the city’s satellites from Torrance to downtown to the Valley, from nightclubs to drug dens to hideouts, orbiting a planet none of us, including lifelong residents, has seen. The trio’s apotheosis, Once Upon a Time in Hollywood, is the L.A. that all of us go on seeing in our dreams however much we shake ourselves awake.

RELATED: An Expert Dissects Once Upon a Time in Hollywood‘s Faux 1960s Movie Posters