Home Film An Expert Dissects Once Upon a Time in Hollywood‘s Faux 1960s Movie... 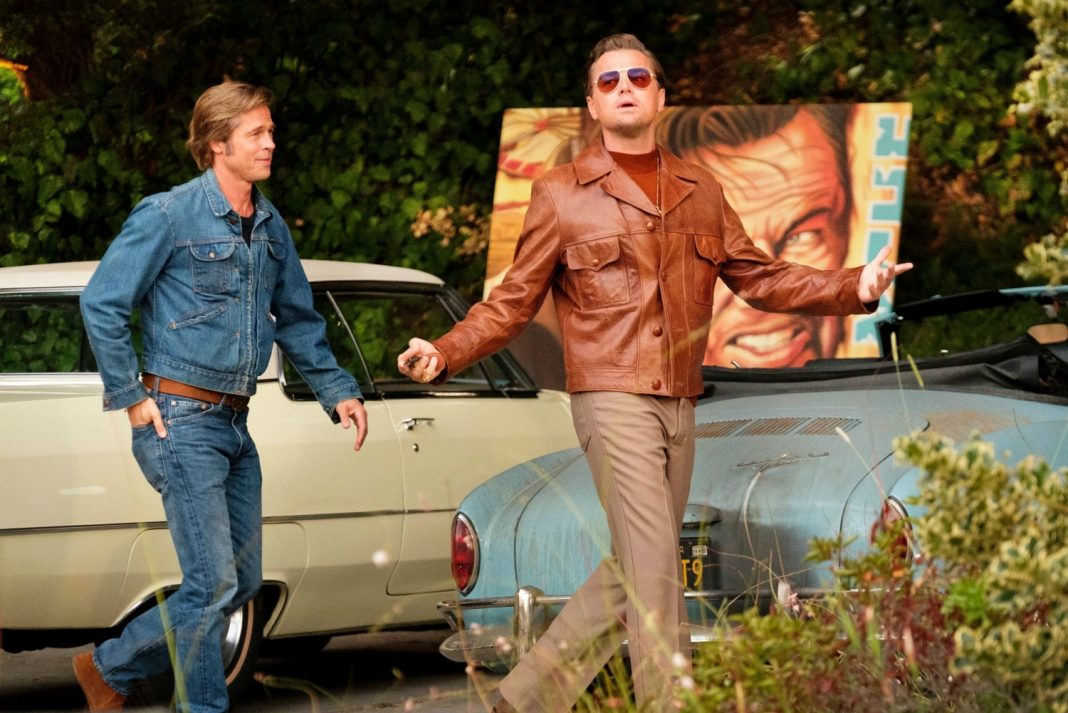 History lover Quentin Tarantino is outdoing himself by bringing the lost world of late 1960s Los Angeles back to life for his new film Once Upon a Time in Hollywood. Weeks of location filming in Westwood, Burbank, the Fairfax district, and at a rebuilt early Taco Bell in Orange County, culminated with the epic transformation Hollywood Boulevard as dozens of storefronts were returned to their former glory last summer.

The director spent five years working on a novel that evolved into the film, so he had plenty of time to create backstory on backstory and to flesh out the fictionalized world of his main character, Rick Dalton, played by Leonardo DiCaprio. In a brilliant stroke of guerrilla marketing, the studio has been rolling out fake vintage posters depicting the arc of DiCaprio’s cowboy character.

We asked movie poster expert Jeffrey Mantor, owner of the 81-year-old Larry Edmunds Bookshop in Hollywood (the 1960s version of his store makes an appearance in the film), to walk us through the four posters we’ve seen so far.

“I think he should have to go and make all these movies now so we can see them,” Mantor says.

“If I was doing Rick Dalton’s filmography, I’d say it was one of his earliest films. They’re all genre films, which started with the sword-and-sandal movies in the early ’60s. The Westerns took over after that and there’s more of a character shift to the anti-hero. It went from Steve Reeves as Hercules to Clint Eastwood in the Sergio Leone pictures. They’re much more dark and mysterious and they kill people. You’re kinda rooting for him, but he’s not necessarily wearing the white hat. I associate this style with French and Italian posters of the late 1950s to mid 60s. They did them with chalk and grease pencil and they had super vibrant colorizations and real heavy shading. They all clearly have elements of real things. I had one like this for Kitten with a Whip. It had a huge Ann-Margret face on it.”

“Sergio Corbucci is shown as the director of this one and he was really famous in Italy for dirtier and grittier spaghetti westerns. His films had desolate surroundings and lots of fun violence. He directed Django, which Tarantino borrowed as the title of one of his films. Corbucci also directed Navajo Joe starring Burt Reynolds. I’m curious if it’s an homage to that. The new movie is loosely based on the relationship between Burt Reynolds and stuntman Hal Needham. Corbucci also made a movie in 1965 called Minnesota Clay. Could be a reference to that. This one is the closest to a real poster, but would have more credits. But that’s really nitpicking. Who else has made this many cool replica posters for nonexistent 50-year-old films?”

“Another connection to Corbucci! He made a movie called Johnny Oro, with the alternate title of Ringo and His Golden Pistol, and this one translates to Kill me Now Ringo, Said the Gringo. It’s marked Titanus—that’s a real Italian studio and a fun little touch. Seeing these posters in the real world—and especially on the recreated Aquarius Theater is pretty cool. I’m not old enough to remember the original, but anything that can be done to give us back some of the magic of old Hollywood is great. Everybody already knows about all the bad stuff. People wanted all this replica stuff to stay.”

“These are a really clever mixture of reality and fantasy. TotalScope was a real format used in Italy. They also billed the actress Margaret Lee, who is a real British actress who made a lot of movies in Italy in the ’60s. She was originally a Marilyn Monroe type, but got famous in these Euro spy movies. I’m guessing it’s a spy movie. You’ve got a speedboat, and that nice jump going on. Those started with Dr. No and Our Man Flint. There were a lot of James Bond imitators at the time. Steve McQueen would be too big a name for this film; it’s more like a Robert Vaughn or Jack Palance, or maybe a Burt Reynolds. It’s still mid-60s, but definitely later than Tanner. Remember, we’re purely speculating on the filmography of an actor that himself is a work of fiction!”

RELATED: Bruce Lee’s Daughter Thinks Tarantino Should have Consulted Her Before Depicting Him in Once Upon a Time in Hollywood