Home Uncategorized On the Road with Singer Laura Marling 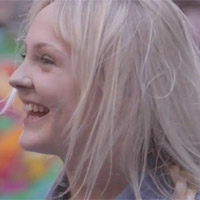 Laura Marling is on a working holiday. For most people, that would involve a leg-cramping flight in coach, a PowerPoint presentation, and a Hawaiian shirt. For the reserved English folk musician, it involves trekking solo across the United States and playing dimly lit venues with no band, no tour manager and nothing but two guitars.

“Simplicity,” explains Marling, taking a drag off her cigarette and unwinding from L.A. traffic. We’re sitting behind a dusty roadhouse in Pioneertown, out near Joshua Tree, where she’ll perform that night. We caught up with Marling earlier this month before she headed to a sold-out show at the Hotel Café in Hollywood. “This Working Holiday Tour was an effort to do a very simple tour, to go places that I wanted to go and never get to go when I’m on a tour bus.”

Marling didn’t have her flight booked until two days before she was scheduled to depart, but leaving London was key. A native of Hampshire, England, the 22-year-old didn’t grow up in a city, so she “finds it a bit of a shame” that she lives in London with its soaring population and “miserable” weather. After finishing her still-untitled new record, set for release in February, she decided to set out on her own.

Marling, an original member of prominent English folk band Noah & the Whale, beat Kanye West to win an NME Award for Best Solo Artist and edged out pop star Ellie Goulding for Best Female Solo Artist at the 2011 Brit Awards. She also has three acclaimed albums under her belt, the first of which, released when she was 16, features the guys from Mumford & Sons as her backing band. Though she has been on the road since she was a teenager, she finds being on a bus a bit of a drag. “Playing is still an emotional challenge. The joy of it is traveling. Being on a bus is not traveling. It’s being on a smelly bus,” says Marling.

She’s a private person who pours a tangle of emotions into her imaginative, lyrically muscular songs. Critics often compare her work to that of Bob Dylan, Neil Young and Joni Mitchell – all childhood inspirations – noting Marling’s vivid imagery, spiritual struggles, and piercing insights.

For Marling, music is both creative outlet and private catharsis. “It’s my escape, in the same way that going and listening to your favorite record is an escape,” she says. “It’s a solitary thing that only you experience. Only you know how it makes you feel. I play guitar every day. I don’t write a song every day, but I’ll sit down quite happily and that’s my meditation.”

“He screams in the night/I scream in the day/We weep in the evening and lie naked and pray,” she sings on “Night after Night” from her last record, A Creature I Don’t Know. “Night after night, day after day/would you watch my body weaken, my mind drift away?”

“I have to accept that I think about these things,” Marling says of the metaphysical themes in her songwriting. “I think there comes a point in everyone’s life where naivety is slightly removed and there are all these massive, massive questions, and whatever sort of walk of life you’re in, you must look for answers to these questions.”