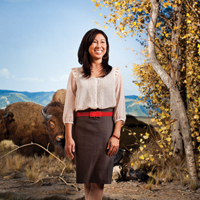 Su Oh, the 40-year-old director of education and programs at the Natural History Museum, is a former geophysics lab tech, agent’s assistant, Grammy Awards manager, and rock singer. “Every odd thing from my past,” Oh says, has helped her transform the museum’s First Fridays series from a spottily attended niche fest five years ago into a must-see showcase of up-and-coming local bands and smart yet accessible scientific discussions. Not only has she booked a diverse lineup of performers and thinkers, but she has curated an eclectic audience: Up to 1,500 people—from parents with children in the grip of dinomania to science fanatics and sonic scenesters—now attend. This year’s series, with the cheeky title “This Time It’s Personal,” sheds light on the scientific method. “We tend to think of science as a finite process,” Oh says. “When you’re younger, you get told everything as facts.” Expect discussions about the louse that destroyed Napoleon’s army (with Wicked Bugs author Amy Stewart) and Pluto’s losing its claim as a planet (courtesy of Caltech professor Michael Brown) intertwined with indie rock talent acts like Zola Jesus, the Soft Moon, and Light Asylum.