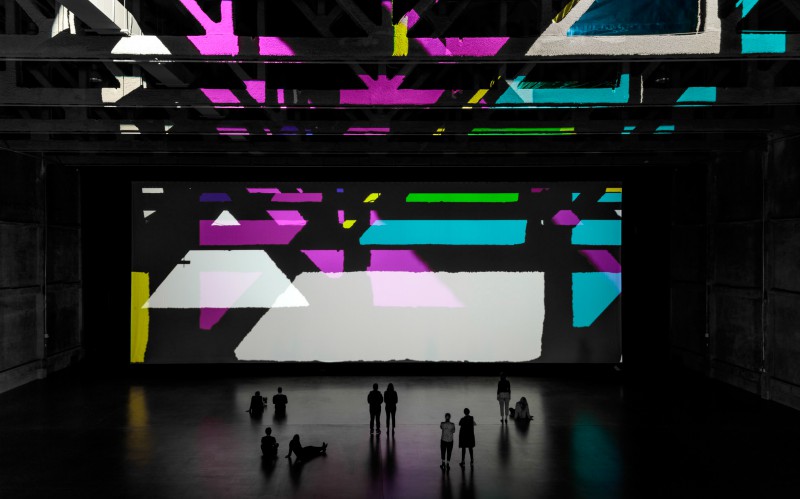 Inside the Marciano Art Foundation’s cavernous first-floor gallery, a pair of projectors glide in opposite directions on parallel tracks on the ceiling, blasting bright white light through a series of colored filters positioned in the rafters. The resulting projection is a kaleidoscopic and ever-changing array of shapes and shadows. As the lights continue their incessant crawl back and forth, luminescent rectangles and triangles—so color saturated and defined they look like they could’ve been produced with a paintbrush or maybe ripped from gargantuan sheets of construction paper—move, change, and eventually disappear altogether. Meanwhile, a soundtrack of disconcerting noises—footsteps, clanks, creaks, and the occasional thunderous boom—echoes through the room, making it sound like an old house full of restless phantoms.

Like his 2003 Tate Modern installation The Weather Project, Olafur Eliasson’s Reality projector, on display through August at Marciano Art Foundation, is a thing to be experienced rather than passively viewed. But unlike other recent immersive exhibitions, visitors are encouraged to take their time inside the space. You can sit or even lie down on the concrete floor as the colors and sounds wash over you. A monitor with a stopwatch appears only in a curtained antechamber where visitors are asked to cool their jets while their eyes adjust to darkness for 20 seconds (roughly the same amount of time people were permitted to spend viewing each piece during the Broad’s recent Yayoi Kusama: Infinity Rooms). Eliasson conceived of the project after a 2016 visit to the museum, a former Scottish Rite Masonic Temple on Wilshire Boulevard that has since become home to special exhibitions and a revolving selection of art from the collection of Guess Jeans founders Maurice and Paul Marciano. He went back to his studio in Berlin and built a scale model of what he envisioned, slowly but surely removing elements until the space—the temple’s former theater—was basically empty except for the projectors and filters. The soundscape was created, with Eliasson’s input, by musician and sound artist Jónsi, frontman of Icelandic band Sigur Rós. (In an interview, Eliasson explained that the point was to make sounds that could or would be familiar, but stop just before they were recognizable “so there is plenty of room for people to be like, ‘This reminds me of some faint memory I have… .'”)

Reality projector is MAF’s second of two installations that interact directly with the space and its history. The inaugural display by L.A. artist Jim Shaw utilized theatrical backdrops left behind by the Freemasons who vacated the building in the ’90s; entitled The Wig Museum, it also paid homage to the Masonic penchant for dramatic hairpieces.

Eliasson, however, concentrated on the building’s bones. He spent a lot of time in the space during installation, but Wednesday’s media preview was his first opportunity to see it with the silhouettes of people inside. “Now I hope it will be a busy show because it actually looks very nice with a lot of people in there,” he says.

Really though, Eliasson’s work is never complete without the viewer. Without a viewer’s perception, reality doesn’t really exist. “For me, the whole thing is…a kind of hospitality towards your wish to become a projector,” he says. “So I would like to suggest that the reality projector is, in fact, you. Obviously there is light being projected and all that, but the truth is we can turn it around and say, you are not the consumer, you are in fact the producer.” Reality projector hands agency over to the viewer, and it’s immersive without being remotely selfie friendly (in any photo, you’ll be little more than a silhouette). It’s refreshing to be invited to be a projector rather than a prop, for a change. Accept the invitation.