Home Music OK Go Is Out to Melt Your Mind 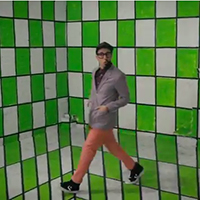 WHAT: OK Go is famous for its inventive music videos. 2006’s “Here It Goes Again,” which featured the band performing on synchronized treadmills, became a viral sensation. This week the L.A.-based outfit released an even more ambitious video for “The Writing’s on the Wall.”

VERDICT: Incredible! Shot in one take, the video is full of mind-melting optical illusions that’ll have you asking, “How’d they do that?” for three-and-a-half minutes.