Home Uncategorized Off and Running! 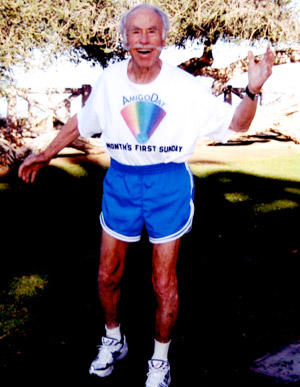 When we received a letter from Julian Myers, a 92-year-old self-titled “Hollywood publicity man” and longtime L.A. resident, announcing his participation in the Huntsman World Senior games this week, we had to know more. We sat down with the gold medalist—he’s taken top honors in most events for his age group the past four years—to talk about his inspiration, how he trains, and what he hopes to accomplish next:

What are the Huntsman World Senior Games?
They’ve been going on for a little more than 20 years I believe and I think they are the leading international senior event for every kind of sport you can think of, and a few you can’t. They have competitions for everything from square dancing to crocheting, ping-pong, table tennis, and all the official running and jumping events. I win virtually all the longer races each time; there aren’t very many other old geezers that enter them. The last four years, as far as I know, I held the US senior masters American record in the 3000 meter. This year I’m going in seven running events and six field events.

What inspired you to start running?
My wife and I had been married 25 years and had 3 children, and I was working as a publicist in the entertainment industry. We had a good life but my wife suddenly told me that she didn’t want to be married anymore. Maybe I missed out on something that I should have contributed to the marriage, I’m not sure to this day. When my wife told me she wanted a divorce, it shook me up quite a bit. To get a hold of myself, I would jog a mile or two every morning just to know that I could do something; it gave me a sense of some kind of minor accomplishment or confidence.

And you’ve been running ever since?
When I married Patsy, which was a couple years later, she asked about my jogging every morning. I told her that I didn’t have to anymore and she said, “Oh yes you do Julian, that’s contributing to your good health.” So I’ve been doing it for 40 years. For my 90th birthday two years ago, I ran 90 of the miles from San Diego to Los Angeles. After 87 miles I ran in the LA Marathon’s 5K, which is about three miles. The whole trip took nine or ten days; I’d run about ten miles a day and we had friends and family and other wonderful people who ran with me. I can’t remember an inch I ran alone.

How do you train for your competitions?
Patsy walks and I jog slowly every morning out in the marina, where we live. I was there this morning at ten minutes to six and I’m there virtually every morning during the week for about half an hour, just a mile or so. Then every Saturday we have breakfast at Callahan’s restaurant in Santa Monica on 12th and Wilshire, and after that, at around 9 o’clock when the meters start working out in front, Patsy drives me to Wilshire and Santa Monica and I run home to our apartment. It’s about four or five miles and it takes me a long time, but I don’t push myself. I do it virtually every Saturday of my life.

Do you attribute your good health to your running?
I attribute everything that’s good in my life to Patsy, my wife. If she didn’t encourage me and guide me and spend most of her time figuring out what was best for me, I literally couldn’t be here—I wouldn’t be alive.

What else are you most proud of?
My mother was a godly woman, and she taught me that there are good people among all groups and colors and nations and religions. I’ve never forgotten that, and I think now that I’m older I thought what the heck have I done to carry on that idea. I hadn’t done anything specific to make her concepts grow and influence society. Maybe I woke up someday and thought, Julian you have to do something. So Patsy and I founded AmigoDay, where you greet anyone, anywhere, your way, the first Sunday any month. I’ve run in 25 marathons with my AmigoDay shirt on to promote it, but I haven’t worked it into the bloodstream of the world yet. I intend to live to be 120, so I’ve got 28 more years to work on it.