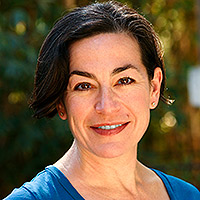 “Certain objects,” Dinah Lenney writes, “not always the ones we’d expect to keep or remember or dream about, insinuate themselves—take on a lustre in which we are reflected.” It’s quite the thought to ponder: why do we hold on to certain items, trinkets, doodads, and dispose of others? How have those objects shaped who we are or who we will become? In The Object Parade, Lenney’s new collection of essays, the Echo Park-based author, actress, and teacher (my former thesis advisor, in fact) considered these questions and more, artfully stringing together various memories from her life as told through the things within it. Read our interview with Lenney below, and enter to win one of five signed copies of The Object Parade here.

The Object Parade is a departure from your last memoir, Bigger than Life, about the murder of your father. Was this book in any way a continuation of the catharsis regarding his death? Or do you view the two as separate entities with separate purposes?
I think (I hope) that the books are very different. And that they have separate purposes, yes—see, if the catalyst for Bigger than Life was my father’s murder, it turned out to be much about other things. About grief, of course. But because my parents split up and remarried when I was a toddler (and I have no siblings from the first marriage) I was grieving alone—so the book was necessarily about that dynamic. In that sense it was a book I was always going to write; I’d been writing around it for years—that is, I needed to figure out where I belonged and to whom. As much as anything, BTL is a story about coming to terms with divorce. And with a kind of survivor’s guilt, since I meant to honor a relationship (a few, in fact) that had been difficult and confusing.

The parade, though, is short on trauma, and the tone of the book is lighter (I think, I hope). But because it’s also much about family, and about what’s happened since the murder, I guess it is a sort of extension. Not meant to be a sequel, but I definitely had to write the other book first. You know what else? It was hard to figure out how to include my father in the parade. I mean, how not to give him a chapter, right? His life and death continue to have everything to do with mine. But I couldn’t let him steal the show. Because the message of the book (I hope) is that we carry on.

Two quotes appear at the beginning of the book that read as follows:

I am giving you this because I love you. Or because it was given to me. Because I bought it somewhere special. Because you will care for it. Because it will complicate your life. —Edmund de Waal, The Hare with the Amber Eyes

The object…has no duty whatsoever toward me, it is I who am obliged to it. —Francis Ponge, Mute Objects of Affection

Both ascribe a certain power to inanimate objects. I’m curious, did you come up with the concept for the book and then find the quotes, or was it the opposite that inspired the structure? What was it that inspired you to write the collection at all?
Well, you know how it is: when you’re working on something, when you’re obsessed, you keep bumping into whatever it is—or I do, anyway. So the quotes didn’t spark the idea, no. But once I knew what I was doing, I started collecting them. As if for good luck—or affirmation, or whatever—and they kind of spurred me on. You can’t believe how many there were! I even included another as an epigraph—part of a poem by Kay Ryan called Blue China Doorknob—but my editor thought three were a bit much. And, as usual, he was right. However, the original inspiration? It was an Object Parade! A bunch of third and fourth graders dressed up as life-sized objects—my son was the turquoise walkie-talkie—so that’s what gave me the idea. What was the hardest part of pulling this book together?
The book is a collection of discrete essays, so the challenge was thinking about it as a book. And then coming up with the right chronology so that it hung together as a whole—as greater than the sum of its parts.

Were you ever concerned that the memories you associate with these objects might offend those who had given them to you or who were part of the memories themselves? Did the thought affect your writing at all?
Absolutely, I was. But then I’d get excited about the writing and forget to worry. I did go back and tweak here and there—my agenda is not to blame, or hurt, or cast aspersions. But what I find is that I can’t always anticipate who will be offended and why. So much of my worrying turns out to be a waste of time.

As a professor of memoir and essay, what is one thing you teach your students that you struggle to do with your own work?
I remind them that if we knew all the answers—what things mean to us and how they stack up—we wouldn’t have to write in the first place. This kind of writing, it’s all about questions. And self-interrogation. And wanting to figure things out. That’s what drives it—that’s what makes it interesting for writers and readers both—and that’s what gives the prose a pulse.

Why was it important for you to publish this collection? To tell these stories?
Not that I knew until I was finished, but I needed to come to terms with who and where I am (as a wife, mother, actor, writer, registered-voter-in-Los-Angeles) and how I got from then to now, there to here.

Tell us the story of one object that didn’t make it into the book.
Boy, there are at least a dozen. But okay: I have this beautiful pencil jar—big and shapely and painted with vines and flowers—which used to be a mug until it lost its handle. I bought it in San Francisco 15 years ago when I went up there to do a play for a couple of months. Even though I lived in Echo Park. Even though I had two little kids and two dogs and a lovely husband. It was such a good role—such a wonderful chance. The upshot—how to say this?—I put myself and my career ahead of my family. I mean, I trusted that we were solid enough, Fred and I, to make it work. And we were. And we did. But that role and that play—it seemed so important at the time. And I think it was, for all kinds of reasons, although not necessarily the ones I had in mind. Just like writing, right? Just like life.