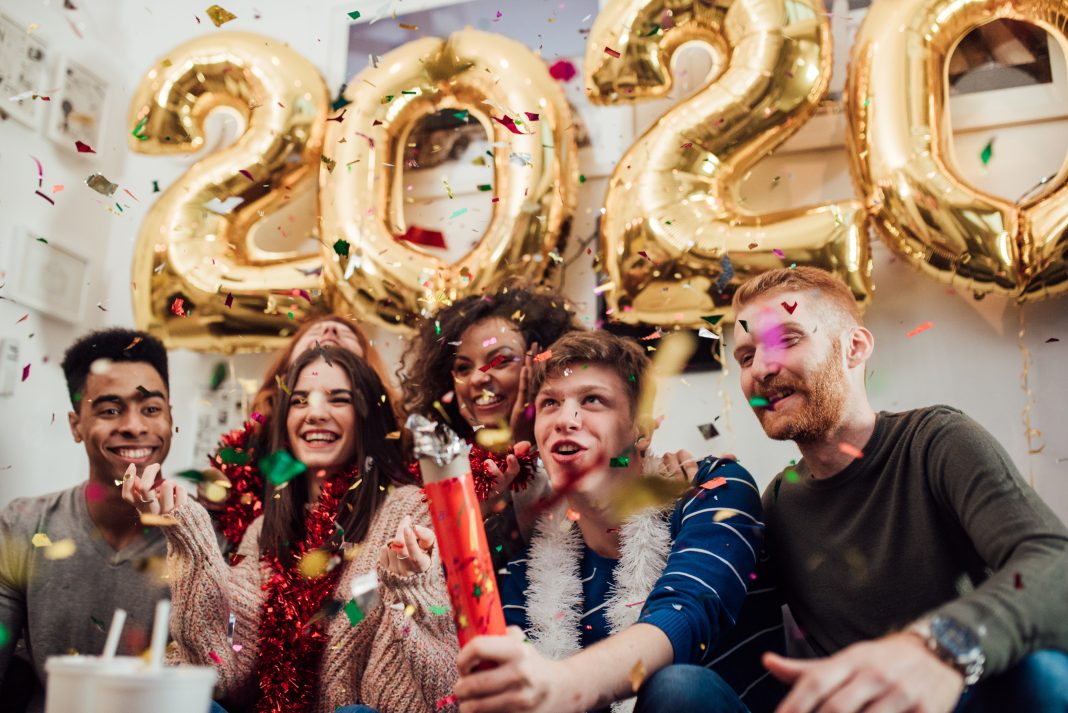 We’re all just days away from turning our back on the fiery wreck that was 2019 and sashaying into 2020 like Angela Bassett in Waiting to Exhale. All that’s left is to ring in the new year with a suitable blowout. Take your pick from our favorite NYE parties, which include elegant dinners, community celebrations, and even a few chill hangs for those who want to do something but not the whole thing.

The Bazaar and Gate Bar Centro

The Bazaar by José Andrés celebrates the big night with two different events. There’s a Spanish masquerade, with a menu packed with every decadence–oysters, truffles, caviar–available as an early-evening dinner or a seating intended for those who want to stay past midnight. Alternately, you could spring for a special experience at modernist cocktail bar Gate Bar Centro, adjacent to the Bazaar. The New Years Eve Flight includes Champagne, cocktails, and late-night access to the masquerade party. The Bazaar, 465 S. La Cienega Blvd., Pico-Robertson. Tickets $175-$400.

Each property within the TAO nightlife complex in Hollywood will be hosting an event, which you can book individually or opt for an “all access” pass that combines offerings. Avenue, TAO, the Highlight Room, and even Luchini Pizzeria get in on the fun (Luchini is offering a $50 deal that includes unlimited pizza). Dream Hollywood Hotel offers special rates for those who want to stay on site. TAO Hollywood, 6421 Selma Ave., Hollywood. Tickets $50-$225.

All aboard the Queen Mary for a lavish New Year’s celebration. The theme for this year’s edition of the annual affair is “Past and Present.” Unlike the ship’s other holiday events, this one is strictly 21+. The Queen Mary, 1126 Queens Hwy., Long Beach. Tickets $120-$220.

A classic Hollywood theme takes over two ballrooms at the recently restored Castaway. Festivities include live entertainment, dancing, light fare, and open bar. Come earlier and dine in the restaurant’s dining area, where you’ll be serenaded by a jazz combo and sip a bottle of Veuve Clicquot included with every two dinner tickets. The Castaway, 1250 E. Harvard Rd., Burbank. Tickets $125-$150.

Swing into the new year Italian-style at Terra. Hang out on the rooftop, enjoy a few cocktails, and graze from passed apps and buffet stations. Terra 10250 Santa Monica Blvd., Century City.

Out with the Old Rooftop Party at the Hoxton Hotel

New DTLA hotel The Hoxton opens up its rooftop bar for a free party, complete with cocktails, a dance floor, and more. The party is hosted by Kaycee Kuna, a fashion stylist and founder of designer-rental service Bag Lady. The Hoxton, 1060 S. Broadway, downtown. Free with RSVP.

Super-stylish nightclub Poppy and modern Mexican restaurant Petit Taqueria–both from the nightlife experts at h.wood Group–team up for this shindig. Expect five hours of open bar, dancing to DJs playing a mix of genres, and complimentary bubbles to accompany the midnight countdown. A deeply discounted ticket allows entry to the party after 12:30 if you plan to pre-game elsewhere. Poppy, 755 N. La Cienega Blvd., Hollywood. Tickets $39-$104.

Celebrate on the rooftop of the chic and brand new Santa Monica Proper hotel. DJ MikeyLife will provide the soundtrack, food and drink will be available to order, and ocean views are included. 700 Wilshire Blvd, Santa Monica. Tickets from $75.

“No Bullshit NYE” at Melody

Long Beach favorite the Federal gets in on the NYE celebration with a multi-room party. Sit down for dinner in the main dining area, or head to the Parlour lounge for an open bar included festive punch cocktails. Go downstairs the the Federal Underground nightclub space for a late-night dance party. 102 Pine Ave, Long Beach. From $25.

The glam Waldorf Astoria is going for full party mode this NYE. In the fine dining room, Jean-Georges Beverly Hills, there will be two different options for dinner–an early seating with a la carte menu and later seating with elegant set menu and masquerade theme. But the real party is on the roof, where you’ll indulge in a chic soiree with a view of the city lights. 9850 Wilshire Blvd, Beverly Hills. Rooftop party tickets from $240.

Big name in contemporary burlesque and all-around paragon of glamour Dita Von Teese makes an appearance in L.A. for New Year’s Eve. Shimmy into 2019 with her, her trunk full of sparkling costumes, and a troupe of fellow burlesque all-stars. Orpheum Theater, 842 S. Broadway, downtown. Tickets $49-$225.

Los Freddy’s ranked among Mexico’s biggest musical groups in the 1960s and ’70s; original singer Arturo Cisneros has recently rejoined the group after leaving to pursue a solo career in 1994. The brand will croon you into 2020 along with L.A.’s own La Chambra, and the Selena tribute ensemble Selenamos. The Palace Theatre, 630 S. Broadway, downtown. Tickets $32-$76 (ages 18+).

German trance superstar Markus Schulz plays open to close at this party that will have you dancing right into the new year. If you’re looking for the perfect classic club night, this should do the trick. Avalon Hollywood, 1735 Vine St., Hollywood. Tickets $70-$150.

Held at NYE and Halloween, the Minimal Effort event series has developed a loyal following. Join them for the latest outing featuring music from Bart Skils, Layton Giordani, Ross from Friends, Detlef, and many more. Upgraded VIP tickets include a private bar and other perks. Los Angeles Theatre, 615 S. Broadway, downtown. Tickets $59-$159.

Wear your dark eyeliner and black ensemble for the most dark wave affair of the holiday season. TR/ST, Light Asylum, and the Machine Club DJs will take the stage. Regent Theater, 448 S Main St, downtown. Tickets $35-$125.

All your favorite local indie rockers–Moon Honey, Lauren Ruth Ward, Draemings, Veronica Bianiqui, etc–will be on hand for this special event in the Champagne Room at Taix. It’s billed as a “night of mystical vibrations and timeless music” (and, with Taix’s forthcoming redevelopment, it could be one of your last changes to ring in the new year in the historic space as it stands now). Taix Restaurant, 1911 Sunset Blvd., Echo Park. Tickets $33.

DTLA’s favorite NYE party returns. The final moments before midnight will be marked with a digital projection countdown on the west side of City Hall. Attendees are allowed to bring food that fits in a backpack or tote bags, but the event is 100 percent alcohol free, so don’t try to smuggle that flask in your pocket. Grand Park and the Music Center, 135 N. Grand Ave., downtown. Free.

The New Year rings in twice at this family-friendly fete: New York City’s ball drop will be shown at 9 p.m. for those who want to wrap-up early, followed by a second countdown at midnight. Both “midnights” will have their own fireworks shows. Before 9, a “Glow Party” goes down with DJs, robots, bubbles, and food trucks. Burton Chace Park, 13650 Mindanao Way, Marina del Rey. Free.

Disneyland stays open late to host a NYE celebration that’s sure to delight all ages. There will be a nighttime parade, live performance, and fireworks show to mark the occasion. The day can be one of the busiest of the year for the park, but if you’re up for it, it should make for a memorable experience. Disneyland, 1313 Disneyland Dr., Anaheim.

Not all “family-friendly” affairs have to be corny. Casual seafood spot Found Oyster is offering a low-key celebration, with a special “ball drop” on Cape Cod time, aka 9 p.m. for us. The regular menu will be on offer, along with some special upgrades–and Champagne for grown-ups of course. 4880 Fountain Ave., Hollywood. No ticket fees or reservations.

NoMad will offer a seated dinner in the Mezzanine restaurant, featuring a four-course set menu. For an additional $50, you can add access to a celebration going on in the lobby, featuring drinks, light food, and entertainment. NoMad Hotel, 649 Olive St., downtown. $145.

One of L.A.’s most romantic restaurants celebrates the night with a special menu of small plates and sharing platters. You’ll find classics from the regular menu (hello, Spanish Fried Chicken) and special treats. Swear you’re not going out and then decide to go somewhere at the last minute? a.o.c. is holding the communal table and bar for walk-in diners, with an a la carte menu. 8700 W 3rd street, West Hollywood. $140.

Chef Josiah Citrin’s project in the rooftop greenhouse at LINE Hotel celebrates its second New Year’s Eve with a six-course meal. After dinner, there will be music and dancing in the hotel’s lobby bar area. A briefer, three-course menu ($68) will also be available for those who opt for an earlier seating, before 6:30 p.m. Openaire at LINE Hotel, 3515 Wilshire Blvd., Koreatown. Second seating, $165.

Wolfgang Puck is putting together a luxe feast worthy of the big night. Enjoy a six-course meal in the glittering rooftop dining room of WP24, after which you’ll be escorted to the “midnight lounge” for desserts, drinks, and revelry into the night. WP24, 900 W Olympic Blvd., downtown. $169.

December 31 will be the last night of the restaurant’s Tuscany menu. It will be served over the course of two seatings, the later seating includes special truffle and caviar upgrades, and after the main meal, desserts and midnight toasts will take place in Maude’s elegant wine loft. Maude, 212 S. Beverly Dr., Beverly Hills. $150-$195.

Chef Helene An puts her personal biography into this special New Year’s Eve dinner, which features five courses by her and Chef Tony Nguyen. Come for the second seating and you’ll be invited to hang out for a party in the downstairs lounge at Crustacean, featuring live band, dancing, and a midnight balloon drop. 466 N. Bedford Drive
Beverly Hills. $125-$350.

Ricardo Zarante’s WeHo Rosaliné invites you to “party Peruvian style” this year. The resto will offer seatings throughout out the night for multi-course dinner of the chef’s modern Peruvian fare. Book a table after 8:30 p.m. and they’ll include a glass of bubbles for a midnight toast. 8479 Melrose Ave, West Hollywood. $99-$110.

Transport yourself for “A Night in Champagne,” a five-course dinner inspired by the region responsible for NYE’s most iconic beverage. In addition to the French fare, you’ll have the option to upgrade to a luxe Champagne pairing by the House of Lanson. 8474 Melrose Ave, West Hollywood. $110-$150.

Posh seafood spot Catch LA is ringing in the new year with a “Roaring 20s” theme night. There will be two seating options for pixe fixe menus, featuring surf, turf, and veggie options, and a midnight countdown. The celeb favorite does a quick change in the wee hours and re-opens at 10:30 a.m. for New Year’s Day brunch. 8715 Melrose Ave, West Hollywood. $95-$150.

RELATED: 7 of the Best Places to Buy a Christmas Tree in L.A.