Home Politics There Are a Lot of Lessons to Be Learned From the Life... 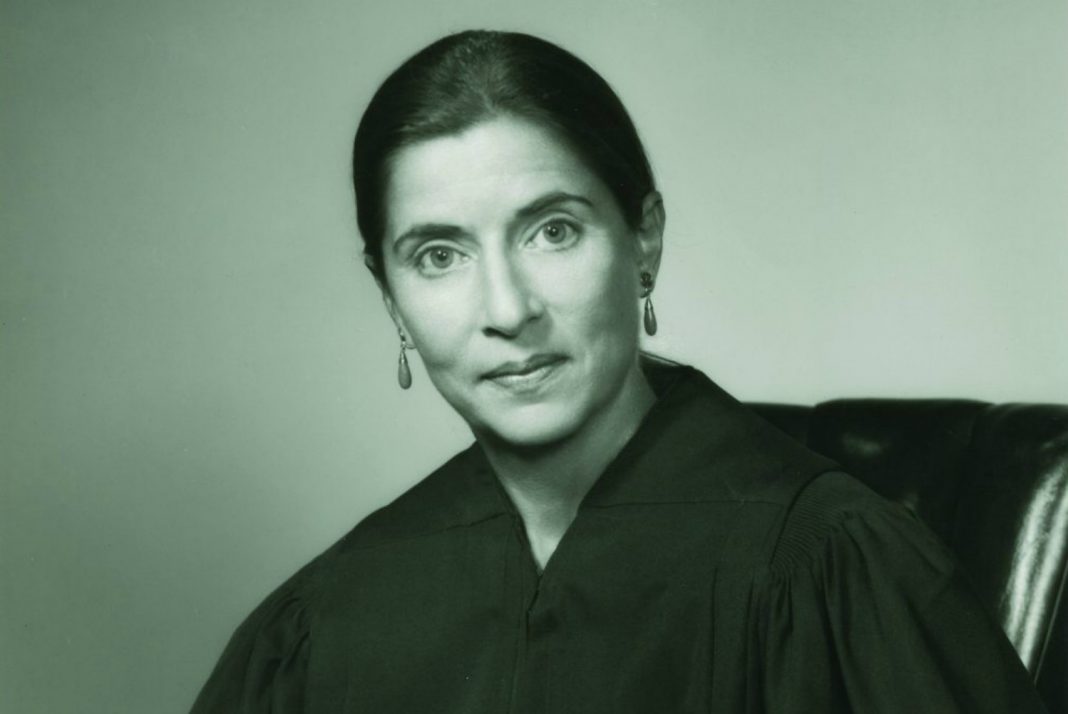 Collection of the Supreme Court of the United States.

At a media preview for the Skirball Cultural Center’s new exhibit, Notorious RBG: The Life and Times of Ruth Bader Ginsburg, associate curator Cate Thurston said of the Supreme Court justice, “Her life is more important than ever—in the literal sense.”

A rigorously detailed look into the iconic octogenarian’s life and career, the exhibit was created in partnership with attorney Shana Knizhnik, who started the Tumblr that spawned a viral internet meme, and MSNBC reporter Irin Carmon, who, alongside Knizhnik, co-authored the eponymous book about Ginsburg’s life.

In keeping with the same cheeky tone of Carmon and Knizhnik’s book, lyrics from songs by Ginsburg’s fellow Brooklyn native the Notorious B.I.G. adorn the walls. “STEREOTYPES OF A LADY MISUNDERSTOOD” is emblazoned on a wall in the section about her work as a judge; “REAL LOVE” appears where visitors learn about how she met her late husband, Marty.

Through archival photographs and documents, contemporary art, and interactive elements, museum-goers will learn more about Justice Ginsburg and get a lesson in the American legal system and Civil Rights movements through the lens of her personal experiences and public service.

Carmon and Knizhnik say they had no idea that when the exhibit opened the values Ginsburg devoted her life would be under assault. It makes the exhibition that much more urgent, not only for those who love and admire Ginsburg but also for those who don’t necessarily agree with what she stands for.

“Justice Ginsburg makes space for difference,” Thurston says. “Whether you agree with her politics or not, there’s space for you in this exhibition and if this moment in time is difficult for you, do the work. That’s what Justice Ginsburg would do.”

After its run at the Skirball—from October 20, 2018 to March 10, 2019—the exhibit will also go on a national tour to the Contemporary Jewish Museum in San Francisco, the Illinois Holocaust Museum & Education Center, the National Museum of American Jewish History in Philadelphia, and two other locations.

The most exciting part about the exhibition, Thurston says, was also the most challenging. “[Ginsburg] is a living person, her work is not done yet, so where do you stop the story? It’s an ongoing story and so as the exhibition travels, we’ll be updating the listening stations to reflect new cases from every Supreme Court term.” When it travels, Thurston added that it will reflect 2019, 2020, 2021, 2022, and so on.

We spoke with Carmon and Knizhnik about the exhibition, what RBG’s story means to the public in this political climate, and how they apply her values and principles into their everyday work.

Looking back at how this all began, from the Tumblr site, to the traction it got on other social media platforms, and now this more tangible and permanent book and the exhibit, how have you felt in response to how significant and huge your project on Ginsburg has become?

But what I’ve come to realize is that I shouldn’t be surprised at how people respond to Justice Ginsburg’s story because I really think that people are hungry for role models or inspiration, [for] people who have achieved and specifically women who have achieved the sort of thing that Justice Ginsburg has achieved and doing so while fighting for the cause of justice and equality, maintaining her principles throughout her career—it’s really rare to see someone who’s gotten as far as she has and who has done what she has.

So, I’m no longer surprised to how people respond because she kind of is a unique figure in our American life and American history and it’s truly incredible to see what has resulted in this amazing exhibition. It’s awesome that people can [learn about the] history of this individual through the context of American history.

Speaking of context, how much more urgency do you think there is for this exhibition on RBG now compared to when you first began the Tumblr site in 2013? A lot has obviously changed in respect to our political climate.

Knizhnik: It definitely takes on a new relevance and significant and new urgency to the fight that Justice Ginsburg has fought for her entire career. Something that Irin [Carmon] and I have talked about is how to look forward [during] a time that feels like everyday is an assault on our basic liberties, and particularly on the advances that we’ve made as a society. It feels like we’re taking steps back.

But something that I find really inspirational about Justice Ginsburg is that we can’t take our rights for granted. She grew up in a time when these rights didn’t even exist, and she had to fight to achieve them for everyone so I think that what we see as part of her story is just how much she has fought—the tenacity of her life is that these fights are not meant to be ended, they’re something that we have to continue to fight for, and it’s something that we see even in the opinion that she wrote that inspired Notorious RBG to begin with, which is a Martin Luther King Jr. quote that reads, “The moral arc of the universe is long but it bends toward justice.” But she added, “It’s true but only if there’s a steadfast commitment to see the task through.” But what it tells us is that we have to bend that moral arc ourselves and we have to work together to do so. In 2018, it’s even more clear that we have to work together, and even more so that the fight continues and so that the gains we have made are not stripped away even more.

Irin Carmon: And that it’s not inevitable that we move toward process. In fact, that the forces against progress are permittable and very organized, and so it’s not just like, “Oh, everything will get better because young people will grow up and be less racist.” In fact, nothing can be taken for granted.

[The exhibit] is more important than ever if we understand that the history of progress has always involved significant backlash and that that doesn’t meant that the fight is over. And the fact that she’s not giving up on the work that she’s done is really inspiring to all of us, because if she can get up in the morning and go to work and continue to do her best work, decades and decades into this, despite setbacks, despite fierce backlash, I think, is an example to all of us.

Working as an attorney and as a journalist, how do you two implement Justice Ginsburg’s values and teachings on a day-to-day basis?

Knizhnik: As an attorney, RBG’s strategy is really central to what it means to be a successful litigator which is, it’s about adversarial advocacy but it’s also about convincing someone in particular, a judge, to rule your way. Sometimes that really requires swallowing your pride and making the argument in a way that brings someone along with you and so that is something that I try to do as an attorney—try to convince whoever you’re arguing before that your side is the correct one and that they should go your way. That’s something that I absolutely think is central to her story as an attorney and something I do in my daily career.

Carmon: In addition to being a lawyer, Justice Ginsburg is someone who thinks really seriously about writing. She studied with Vladimir Nabokov when he taught at Cornell [University], she took an English class with him and she said that he made her think a lot about which words belong where. She also likes to tell her clerks, “Get it right and keep it tight.” Which could be a rap lyric as well.

There are a couple times when I interviewed her that she said she was pulling an all-nighter because “my pen is hot.” And [someone] commented on Twitter that this was really, truly the RBG rap lyric. She’s so careful and thoughtful in everything she does and says, and it’s an inspiration to think really carefully about the truth and the integrity about everything you say. I once saw her say that her advice to young people would be to “fight for the things you care about, but to do so in a way that would lead others to join you.” And as a writer [that makes me think about] how to bring people along with what you’re arguing and what you’re trying to tell a story about.

RELATED: Meet the Lawyer Who Took the Notorious RBG from Meme to Museum Exhibit