Home Uncategorized Not For Lovers Only: 10 Valentine’s Day Events Strictly for Fun 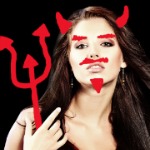 Some people know it as Valentine’s Day. For others, it’s Singles Awareness Day. Somewhere between a champagne and rose petal romance marathon or wallowing alone in a swamp of self-pity, there are options. Here are 10 ways to spend your night that don’t involve sitting on your sofa weeping over Love, Actually.

1. Ladies’ Arm Wrestling at the Bootleg: Ah, Valentine’s Day. That romantic occasion when two people stare into each other’s eyes, clutch hands, and try to rip off the other’s limbs. At least that’s what happens when Fall Brawl champion Madame Murder goes biceps to biceps against her foes. Ticket sales help support those other former tough girls, the baristas and bakers of Homegirl Industries. More information

2. Coffee Is For Lovers Coffee Crawl: Linger with your honey over a steaming latte or make a caffeine-fueled mad dash past your fellow Angelenos to see who can drink the most cups of joe. Stops on the self-guided tour include Intelligentsia, Cognoscenti, Café Dulce, Caffee Luxxe, and Project Gallery + Espresso as well as others. Don’t miss the Latte Heart Throwdown afterparty, where fancy baristas around show off their fabulous foam skills. More information

3. “Love Sux” Anti-Valentine’s Day Party at Universal CityWalk: Hell hath no fury like a singleton with a happy ex. Dig out that voodoo doll stashed under your bed or that photo with the eyes scratched out and you’ll get free admission to Howl At The Moon’s over-the-top fest for jilted and furious lovers. The best defiled picture wins a prize. More information

4. Free Museum Day: Class it up with seasonal activities at SoCal museums. Renew your vows alongside the animal kingdom’s most adorable and monogamous creatures at the Aquarium of the Pacific or catch the smooth stylings of jazz singer Andy Martinez at UCLA’s Fowler Museum. LACMA’s Love Hurts tour showcases pictures of soured love worth thousands of vindictive, rage-filled words. Then take a gander at the ax Jack Nicholson wielded in The Shining as he attempted to chop up his wife. The Kubrick display is open late. More information

5. For The Record: The Marshalls at Rockwell Table & Stage: Sibling director duo Garry and Penny Marshall produced some of the biggest hits of the 1980s and ’90s. If you missed them the first time around—or want a nostalgia trip—catch a rotating cast performing hits from Pretty Woman, Big, A League of Their Own, and The Other Sister, all while enjoying Rockwell’s recently renovated outdoor patio. More information

6. Casablanca and 100 Most Outrageous [email protected]%#s at Cinefamily: The Fairfax theater renews its beautiful Valentine’s Day tradition. Suave Humphrey Bogart and elegant Ingrid Bergman sacrifice their happiness to further the French Resistance in the classic black-and-white movie. Then, the mad geniuses at Cinefamily have edited together the most hilarious, awkward, and bizarre couplings ever committed to film. More information

7. Dita Von Teese at the House of Blues: If Gypsy Rose Lee taught us anything, it’s that sexy is all about presentation. Learn how to flaunt what you’ve got from the best. The queen of burlesque shimmies through LA on her “Strip Strip Horray!” tour. More information

8. Valentine’s Day: The Show at Upright Citizens Brigade: Got a bellyfull of laughs and only five bucks? UCB can help. Funnyman Michael Busch wants to share his one-man shtick but his fellow comedians have other ideas. More information

9. Eric Burdon at the Grammy Museum: This Valentine’s Day, stand elbow to elbow with other fans to hear a talk from the man Rolling Stone named one of the 100 Greatest Voices of All Time. The former Animals and WAR frontman will also treat fans to a set from his latest album, ‘Til Your River Runs Dry. More information

10. The Vagina Monologues at Ensemble Studio Theatre-LA: If your lady flower could sing, what song would it choose? Eve Ensler’s oft-mocked celebration of the coochie is actually quite moving, if you’re looking for a girls’ night. More information