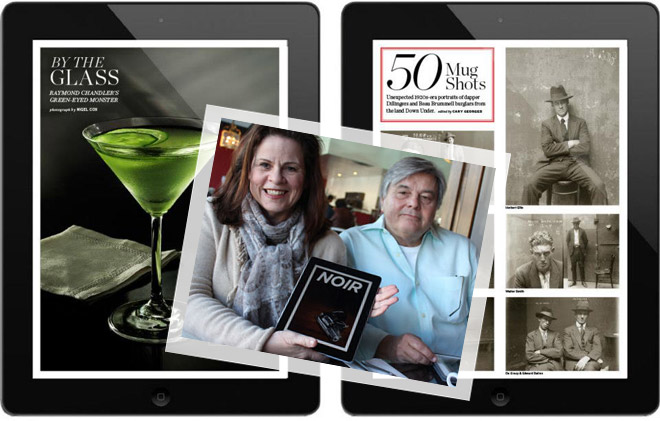 Though most often associated with a bygone era, the sexy, shady noir genre still has a firm hold on pop culture — sometimes unbeknownst to audiences drinking it in. Between Jack Reacher, which was adapted from a noirish book series by Lee Child, and guns-and-dolls throwback flick Gangster Squad, it’s having something of a Hollywood moment.

It’s fitting that Noir, the first tablet-only magazine celebrating the genre, launched quietly in December. The brainchild of former Los Angeles Times Magazine colleagues Nancie Clare and Rip Georges, the electronic publication began as a “what if” dream while the two diehard fans were crafting crime-focused issues of the LA Times magazine. “People weren’t even thinking about the possibilities,” Clare says. “We were really on the vanguard.”

When the mag folded in June of last year, the pair got to work making their dream a reality. A Kickstarter campaign helped them raise $36,000 before they released the January/February issue, albeit a few days behind schedule. At least one buyer noticed, writing to demand his money back.

Clare assured him the digital glossy, which features animated navigation taking users through R-rated excerpts of graphic novel, clips of classic films, and gorgeous, macabre photography spreads, was worth the wait. “I said, ‘Look, we’re about to push the ‘send’ button. If you still hate it, I’ll send you your money back.’” She pauses before adding, “He’s our biggest fan.”

About 400 of their Kickstarter supporters bought in at a level that allows them to receive the $4.99 magazine, and as of Jan. 21, roughly 270 had downloaded their reward copies. Another 100 or so subscriptions and single copies have been snapped up on iTunes. “Our reviews in the App Store and the emails we’ve been getting from people we know have been universally positive,” Clare says.

Clare and George don’t seem concerned about broadening Noir’s niche appeal once readers start paying attention. Both say L.A., with glamour and corruption written into the city’s history, makes a perfect backdrop for the genre’s stories. “Beautiful women, gangsters, an industry that celebrates duplicity, subterfuge and surface beauty…” Clare says. “It’s a Petri dish for noir to grow out of,” Georges adds.

As they start work on the second issue, Clare and Georges seem excited by the possibilities. “The limitation is your imagination. So far, everything that we’ve suggested technically, we’ve been able to execute,” Georges says. “There’s a whole storymaking-filmmaking piece of this. Ultimately, we would love to produce.” His partner in crime laughs and cuts in: “But what we really want to do is direct.”