Home Uncategorized No Doubt Returns to the Stage 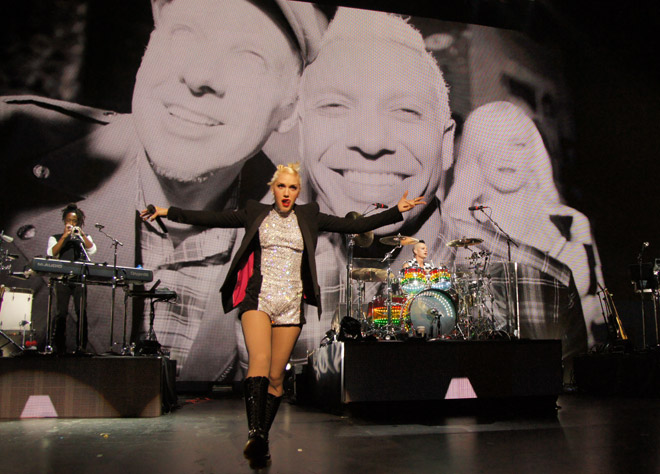 Though they’ve long since reached the stratosphere of pop stardom, Saturday was a night of firsts for No Doubt. First new material they’ve released since 2001. First time they’ve taken the stage in Los Angeles since 2009. But this weekend the band, now going on 25 years, reminded the crowd at the Gibson Amphitheatre why they haven’t lost their edge. In the first of seven shows at this venue, they played a career-spanning set highlighted by material from their new album, Push and Shove.

The Anaheim quartet had some opening-night jitters, with extended silences between the first few songs, but it didn’t take long for them to loosen up. Supported by Grouplove and Nico Vega, the seemingly ageless Gwen Stefani and co. exhibited their usual confidence and exuberance. Pop numbers like “Hella Good” drew the most energy from the crowd, and they hit their stride with an acoustic stretch, but No Doubt shone brightest on older alt-rock tracks like “Sunday Morning” and “Just A Girl.”

“You guys are like the dress rehearsal we get to try this out on,” said Stefani, 43, clad in a sparkly black and white dress, black boots and checkered nail polish. “But you got your tickets first, so you’re like the super duper crowd. Thank you.” Backed by longtime brass players Gabrial McNair and Stephen Bradley, Stefani and band mates Tom Dumont (guitar), Tony Kanal (bass), and Adrian Young (drums) then launched into “Total Hate,” a fan-selected track from1995’s Beacon Street Collection that they once said they’d never play again.

If No Doubt’s killer set didn’t solidify their relevance on its own, the diversity of the crowd— a mishmash of parents toting their toddlers, ska punks, longtime fans and fans not yet born when the diamond-certified Tragic Kingdom was released — proved No Doubt has impressive cross-generational appeal.

“I’m a rough and tough/ Nothin’s gonna knock this girl down,” sang Stefani, on their newest single “Settle Down,” and no one in the crowd could argue with that.

No Doubt returns to the Gibson tonight and every second night after that until Dec. 6. Tickets are still available.