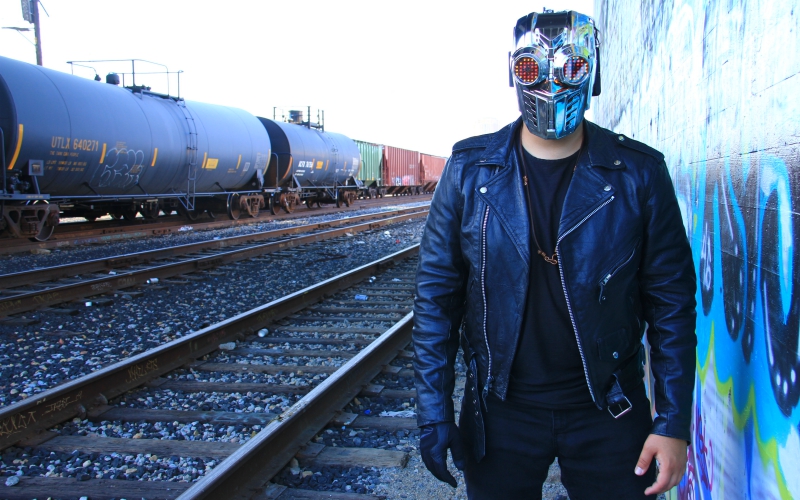 “I always wanted to be a respected musician and a superhero and a mad scientist,” says Kristopher Escajeda. With NKRIOT, he’s found a way to be all three.

On stage recently at Exchange, Escajeda is a masked dance floor superhero. His set on this particular night is part of Art Battle L.A., a series of live painting competitions. As artists duke it out with brushes and paints, Escajeda slays with beats and riffs. His hands fluctuate quickly behind an assortment of electronic gizmos and a guitar. At one point, he jumps on the table in front of him and takes to the axe, striking a pose as dynamic as anything you’d see on a comic book cover. Later on, singer Nancy Sanchez hops onto that table when the two perform their bangin’ rework of her song “Domingo Siete;” a Metropolis-looking robot flashes on the screen behind them. It’s an action-packed spectacle.

At home in Boyle Heights, though, Escajeda is a mild-mannered 28-year-old working out of his Batcave, a bedroom/studio in the home where he lives with his grandparents. Most of the gear that has become part of NKRIOT’s sci-fi disco was in some way altered by Escajeda himself. Even the mask that he wears was cobbled together from an assortment of objects, including parts from a Super Soaker water gun and toys found at a thrift store. When we meet, a little less than two weeks before that gig at Exchange, there’s a microKORG synthesizer lying in a partially disassembled state. It’s Escajeda’s latest modification project, something he started at the beginning of the year.

“I’m not just some dude that’s buying gear,” he says. “I literally find the gear, broken or disassembled or jacked up and I go in and figure it all out on my own and I won’t give up on it. That’s the thing. I won’t give up on a project.”

Escajeda has no formal training in electronics, just an interest in taking apart and rebuilding things. It stems from his childhood, when his dad showed him how to repair VCRs. His grandmother—who spent years working in the aerospace industry—showed him how to solder joints and make harnesses. The rest of his know-how came from trial and error. Over the years, he’s burned a lot of holes in his pants.

Originally a guitarist, Escajeda had experience working on his own speakers, amps, and pedal boards. About five years ago, though, he left his last band and decided to work on his own making electronic music. The problem was that he couldn’t afford a computer. Escajeda was able to get his hands on a small synthesizer called a Kaossilator. When he realized that it wasn’t making the sounds he wanted, he figured out how to hack into the device to fix that.

Eventually, he accumulated a treasure trove of discarded gear that he would go on to adapt for his own purposes. As his skills improved and his style evolved, Escajeda settled on a collection that he thinks of as bandmates. “Most of the time, I trust my equipment because I know what I’ve done to it. I know how I created it and glitched it out, how I modified it,” he says. “That’s something I developed a trust with, like band members. Also, if you can’t trust your band members, then you might as well not be in a band.”

As for the NKRIOT persona, that came about after an incident with a racist club owner earlier in Escajeda’s career. “It really put a damper on my momentum,” he says. Escajeda decided turn NKRIOT into a separate identity, keeping his own a secret for about a year, until a sound issue at a gig led him to unmask himself.

Once Escajeda began revealing himself to more people, bigger opportunities came his way. He landed gigs opening for Big Freedia and Le Butcherettes and played Echo Park Rising. “What it did was make me a stronger person, more confident with myself,” says Escajeda of the mask, “but when I got exposed, that allowed people to gravitate towards me more as a human individual.”

Escajeda isn’t a traditionalist when it comes to his career. His long-term goals combine further merging music and technology and, ultimately, teaching others how to do the same. He dreams of one day organizing a big synthesizer workshop. Recently, he hooked up with LinkedIn for the career-building network’s #InItTogether campaign and will be performing as part of a resume workshop planned for this summer at East Los Angeles College.

“What I do, it’s more than music,” he says. “It’s technology. It’s community. It’s being progressive and moving forward.”