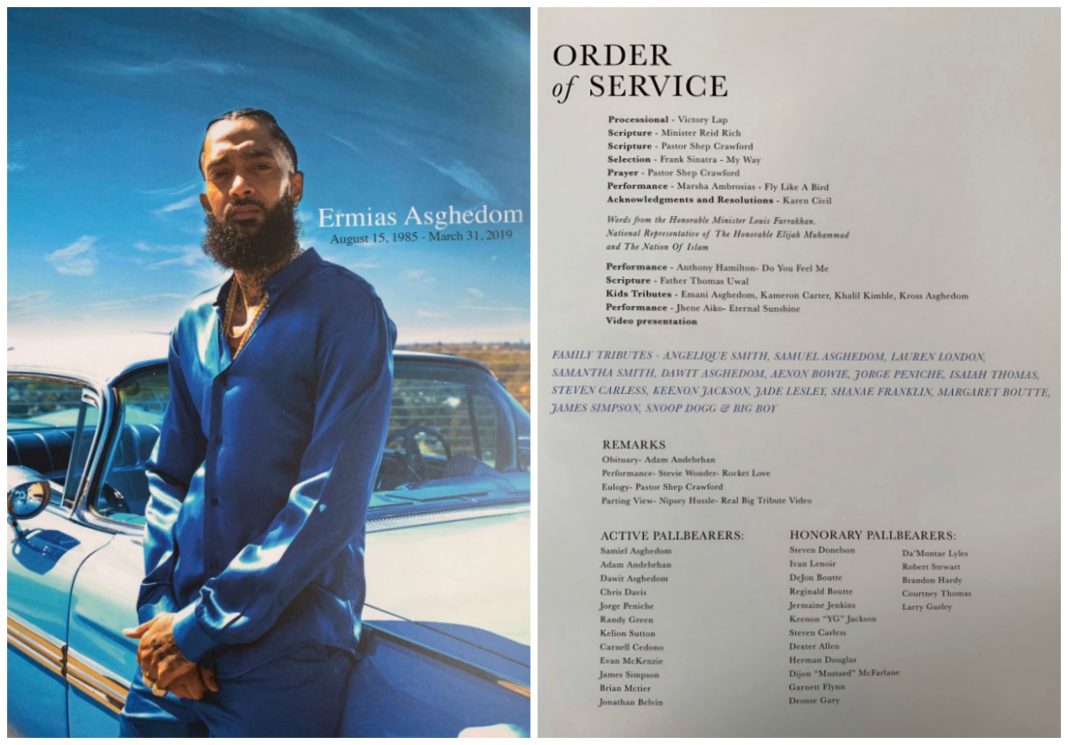 On Thursday morning, thousands of mourners gathered at the Staples Center to celebrate the life of slain rapper and community figure Ermias Asghedom, known as Nipsey Hussle. Public tickets for the official ceremony inside the arena were claimed within minutes of being made available online; more fans and supporters who were unable to secure the passes crowded on plazas and sidewalks of L.A. Live.

Lauren London, Hussle’s long-time partner and co-parent, gave a poignant eulogy. She stood at the podium, dressed in white, eyes shaded behind black sunglasses, and spoke of her lost loved one–and, in particular, of her sadness that their now-2-year-old son will never really know his father.

The ceremony was attended by many of Hussle’s collaborators and admirers in the music world, as well as friends and family. Vince Staples, Big Sean, and YG were among the mourners. Stevie Wonder and Jhene Aiko performed; Snoop Dogg and Louis Farrakhan were among those to deliver speeches memorializing Hussle.

President Barack Obama submitted a letter, read at the ceremony by Karen Civil.

“While most folks look at the Crenshaw neighborhood where he grew up and see only gangs bullets, and despair, Nipsey saw potential,” he wrote. “He saw hope. He saw a community that, even through its flaws, taught him to always keep going. His choice was to invest in that community rather than ignore it–to build a skills training center and coworking space in Crenshaw; to lift up the Eritrean-American community; to set an example for young people to follow–is a legacy worthy of celebration. I hope his memory inspires more good work in Crenshaw and communities like it.”

“I watched a young, ambitious black male orchestrate fellowship amongst the men around him on that tour. Determined to execute one thing–and that thing was greatness. Greatness in knowledge, greatness in wealth, greatness in self,” Lamar wrote of traveling with Hussle in 2009. “To stand in fearlessness in what he believes will impact on earth, as well as in heaven. So thank you Nipsey the Radical. Nipsey the Husband. Nipsey the Friend. Nipsey the Great. And from now on, Nipsey the Messenger.”