Home comedy Nailed It! Host Nicole Byer Keeps Pushing the Envelope in All the... 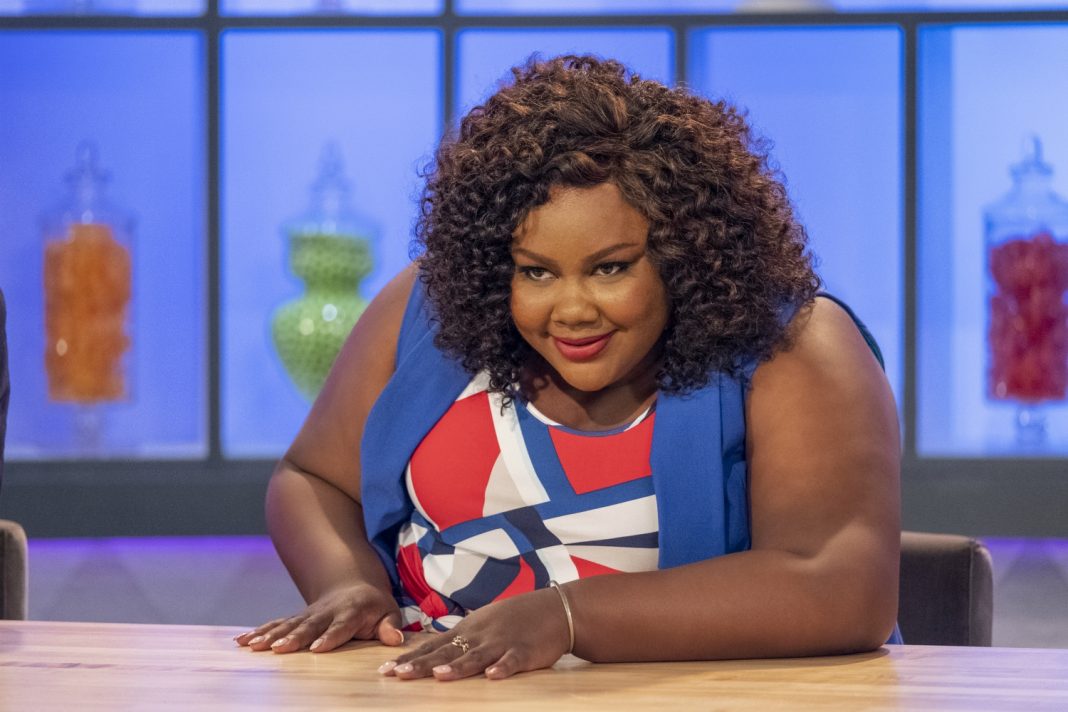 On the third season of Nailed It!, a baking show for incompetent people, a contestant sculpts Michelangelo’s David with a swooping arm so long and flexible that it looks like a muscle-y paper clip (her Dave also sports a thong). Other masterpieces include a cavewoman whose head falls off while her baker is describing it, a doll cake that looks like it was birthed from a radioactive swamp, and plenty of faceless figures that wouldn’t seem out of place in a student-made horror film. When one contestant staples her fondant frame to a cake board, the host of the show, comedian Nicole Byer, quips, “If I die because you stapled something to food, I will come back to haunt you, your family, your mother…everybody.”

As others have noted, by reveling in failure, Nailed It! is surprisingly soothing to watch, like sinking into a warm bath of buttercream. That’s thanks in no small part to the comedic stylings of Byer, a Upright Citizens Brigade alum whose ebullience is infectious, and whose praise (“It’s edible!”) can be understated, sure, but it is warmly delivered.

Byer may be known for judging cakes these days, but she’s also a boundary-pushing improv and stand-up comedian known for her scabrous takes on dating, sex, and race. She’s an expert at packaging social critique behind a veil of silliness: In one of her first viral videos, she satirizes racist casting directors who want her to amplify her blackness. More recently, she’s been outspoken about the racism she’s experienced on the set of her show and has even called out her bosses for not including her in Nailed It! promos.

We caught up with Byer for a candid discussion about the state of comedy, her obsession with drag queens, and which culinary concoctions she’s most regretted sticking in her mouth.

You said in an interview once that you have more in common with drag queens than most people. Do you take comedic inspiration from any specific queen?

I take inspiration from all queens, especially those who do comedy. They push the envelope and they say such risqué things. It’s unfortunate that they can’t do that as much on Drag Race because it’s such a family-friendly show, and part of the lexicon, and everyone’s intro to drag.

A lot of queens have a statement about the world—maybe it’s about how gay, trans, or people of color are being treated—and they can scream it on the streets but no one is listening to them. But at night, they have this crowd of folks enraptured by them. Maybe they inspire people to be activists. In my comedy I’m not always trying to say something, but when I’m playing a creepy dude, you’re laughing because you know that creepy dude. You’ve heard that dude say something awful, and I’m just putting a little creative spin on it.

Sometimes, people don’t get it. One time, Sasheer [Zamata] and I were doing a show in Canada. We were playing two kids—me a boy, Sasheer a girl—after the apocalypse. I took on the dad role, and I was like, “Cook me dinner!” and she was like, “I don’t know how,” and I responded, “Well, you’ve got to learn!” I was basically just using a bunch of tropes about how women have to learn their place when they get married but through the lens of a child. The show went really well, but then afterwards, this older white dude came up to me and was like, “Oh, wow, I did not think women were funny, but I saw you two and you were so funny. Especially when you told her she needed to learn—yes, women need to learn!”

I was like, sorry, you fully didn’t understand this.

For years, you’ve lured brave Angelenos to the stage at the UCB Franklin theater so you could riff on their most revealing and scandalous Google searches. What have you learned about L.A.’s subconscious from these encounters?

A bunch of your teammates—including Drew Tarver, who stars in Comedy Central’s The Other Two, and D’Arcy Carden of NBC’s The Good Place—have also gone huge. What has it been like navigating new echelons of the industry together?

It sucks that we can’t all do shows together anymore because people have early morning call times, but it’s awesome that every single person on our show works. Betsy [Sodaro] is killing it. D’Arcy is killing it. Madeline [Walter] and Marcy [Jarreau] now write for Brooklyn Nine-Nine. Jocelyn [DeBoer] had a movie go to Sundance and won some awards. So it’s been really awesome seeing everyone succeed.

In addition to starring in your own Netflix show and touring the country doing stand-up, you’ve also launched two podcasts recently. Can you tell me more about Best Friends and 90 Day Bae?

Best Friends is a podcast with me and Sasheer where we talk about our friendship and shit we’ve done together. We also interview sets of best friends. It’s just truly fun and silly.

On 90 Day Bae, Marcy Jarreau and I recap 90 Day Fiancée because it’s just the most insane, funniest show on television. It’s like an improv game with people who fall in love overseas on something like FilipinoCupid.com. This other couple fell in love on a karaoke app, which is just the dumbest thing. If someone pitched that in a room, the room would say it’s too weird and not real. Then the stars of the show bring their fiancées to America and their families are like, “This isn’t real, why do you love this person? You’re being insane,” and they’re like, “No we’re not. We love each other very much!” It’s very silly and I’ve never loved a show more.

Nailed It! is so satisfying to watch, especially when everything falls apart. In a culture obsessed with success, do you think celebrating failure is inherently subversive?

A little bit. I mean, I think we spend too much time looking at other people’s papers instead of looking at our own. I think it’s nice that when people do something shitty, they can still be excited about it, like, “I know this is bad, but I put my heart and soul into it!”

Is there anything you’ve particularly regretted sticking in your mouth?

Every time I put something in my mouth I regret it later.

Are there any cooking show hosts you look up to for their grace or charm?

LOL. You think I prepared by watching cooking shows? (Extended laughter.) I truly just memorized the script and was like, “Do I have to hit a mark? Do I have to look in the camera? What do you people want from me? I’d never hosted anything before, other than this wrap-up show for MTV called Are You the One? where I just asked a bunch of questions and did whatever. When they show me very confused, that is real.

It seems like since Nailed It! has become popular your Twitter mentions have also gone off the rails a bit and you’re getting comments from people who don’t understand your brand of comedy. How are you dealing with that?

I mean, I don’t care. I tweeted something about a bunch of white girls wearing cornrows and basketball jerseys, and the caption was “These girls are celebrating ‘Thug Day.’” It was very obvious stereotyping and so I wrote, “You don’t see black people having parties where we wear khakis eat bland food and camp because we have other shit to do. White people need to get hobbies.” People were going off on me in the comments and I just didn’t have the energy to respond that this was irony and a joke. I don’t think all white people do that, just like I don’t think all black people wear cornrows and basketball jerseys. You are missing the joke. Nobody gets jokes anymore. Everyone is very, very, very angry.

In an interview on Conan O’Brien’s podcast, you mentioned how you love being sexually inappropriate with people. Do you feel like that persona is harder to pull off now that there is more of a paranoid climate around boundary-pushing in comedy?

All I say is, “I like a big dick,” so as long as I’m just saying that, no harm is being done. On Reddit there’s a whole thread about how terrible I am, and they’re like, “How would you feel if a dude came onstage and talked about a woman like that.” But I’m like, “You’ve been doing it.” Men still talk about women like that. Come at me with something else. Are you butt hurt that you don’t have a big dick? So sorry!

RELATED: Here Are the Angelenos We’re Rooting for in 2019