In the early ’90s, the Angeleno artist Dani Tull was organizing exhibitions at the Parker Zanic Gallery on South La Brea when he first met British-born painter Nick Taggart. However, it wasn’t until the middle of the pandemic that Tull, who just opened his own solo show of bold kodachromic abstract paintings at Diane Rosenstein Gallery, became aware of a suite of Taggart’s pop-inflected “New Wave” portraits depicting his friends in downtown’s post-punk music, fashion, and arts scene during a fruitful period in 1980.

“I was using Instagram as a way to generate interest in this work that had just hung around in my flat files,” says Taggart of this time capsule of work—including six acrylic on panel paintings and a dozen prints made from a sketchbook of oil pastel portraits of models like Grace Jones and Brooke Shields drawn from pages of The Face and French Vogue—that is now the subject of LA STORIES: PAINTINGS AND DRAWINGS FROM 1980 opening June 26 at Odd Ark LA, the artist-run project space Tull operates with his wife, Yvonne Bas Tull.

“I lived through glam and punk in London and then came here for three months and it was like this hippie Sixties vibe, which I really liked. But by 1980 there was a shift,” recalls Taggart, who came to Los Angeles in 1977 with the dream of doing album art and eventually made work for Van Halen, John Hiatt, and the cover of Richard Pryor’s Wanted: Live in Concert, all while palling around with Irish painter Patrick Morrison and Roger Herman and frequenting underground clubs like the Brave Dog and Al’s Bar. Taggart also made illustrations of various iconic local boutiques like L.A. Eyeworks and Heaven. While Tull is reproducing a graphic T-shirt Taggart made with the latter novelty shop, the commercial side of Taggart’s work wasn’t embraced as much by his peers at the time.

“It was this small scene of people and everyone was hanging out together, but the other artists sneered at me a bit because I did record covers and the paintings were slicker than what everyone else was doing and it didn’t really fit what was going on, so I didn’t feel my work related stylistically,” says Taggart. “People were making things that looked more degraded and I was going in the opposite direction, making things look more glamorous. Maybe at that time it wasn’t the right time to show them, but now it’s more about this moment that disappeared. There’s this guy who’s a screenprinter who sells records at swap meets in Highland Park and he said to me, ‘All these people came here looking for what you painted…but it doesn’t exist anymore.’”

“People were making things that looked more degraded and I was going in the opposite direction, making things look more glamorous.”

Though Taggart showed some of the paintings depicting this mirage-like mise en scene in 1981 when he started a teaching gig at CalArts, these paintings have never really seen the light of day until now. As a result, they operate as a slightly glamorized visual record of the pre-Reagan New Wave era in Los Angeles—one that floats between the visual vocabulary of David Hockney chroma, Eric Fischl psychology, and Patrick Nagel hard-edge. They are figures who could have walked out of a Bret Easton Ellis novel and into Bret Witke’s hot boîte Boys & Girls.

“I suppose I was just recording the look of what was around me which was so different than what was going on in London, which was in a recession and in the middle of a rubbish strike,” adds Taggart. “When I came here where everything was all technicolor.”

“Maybe this feeling of emerging out of the pandemic and into summer allows for self-reflection, but considering where I’ve been in the past couple years, it’s really hard to imagine what that world was like back then,” says Tull. “This carefree post-punk attitude of going to crowded parties in a loft and slam-dancing in a small smoke-filled club tucked away somewhere in Hollywood or downtown L.A. For me, being an Angeleno and living in L.A. is an ongoing process of self-reflection and re-examining history, almost as a way to find footing in the always shifting present cultural landscape of Los Angeles.”

Here Taggart tells the backstories behind this rarely seen body of work. 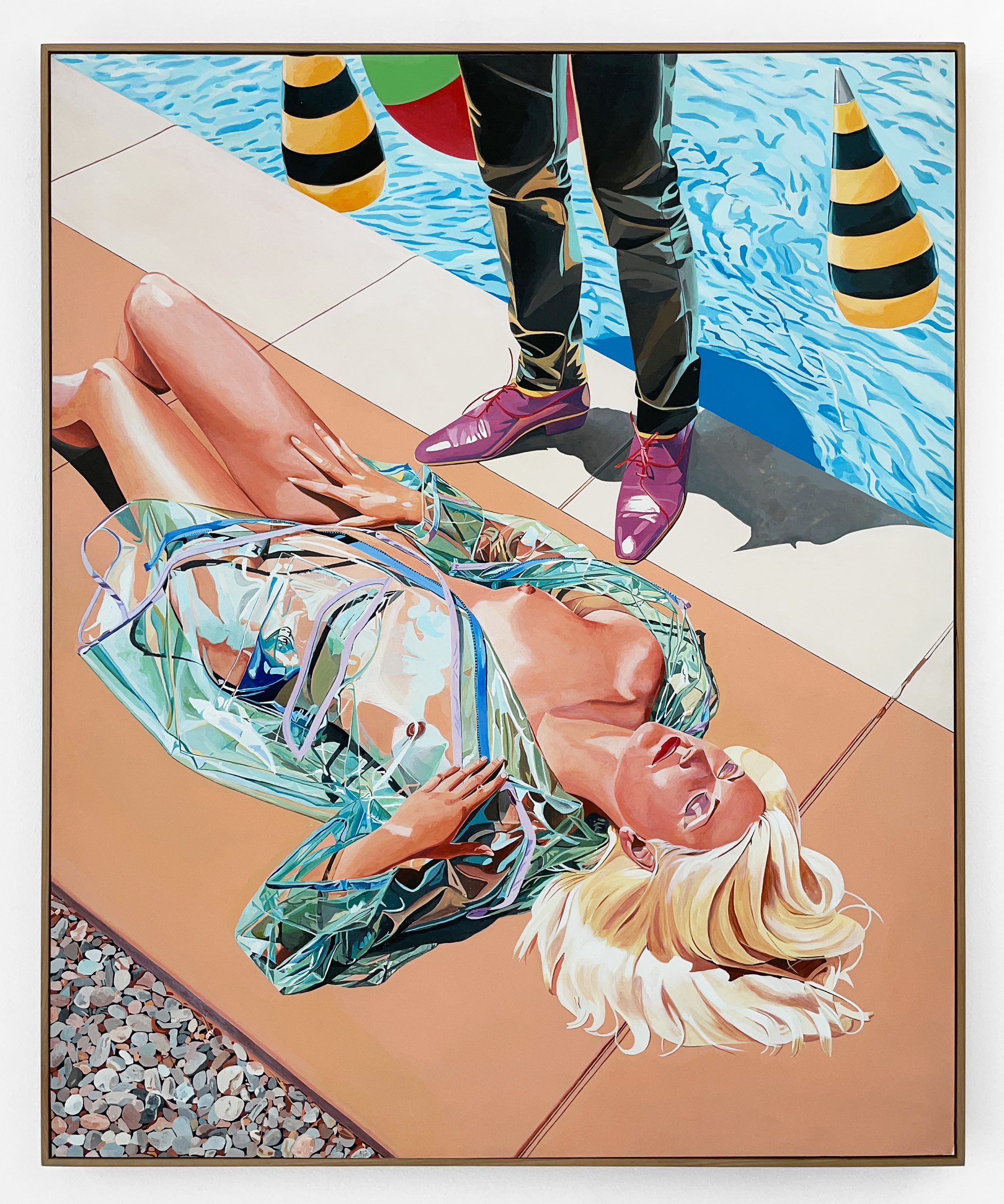 “Gregory is [Blum & Poe co-owner Jeff Poe’s] brother and Jeff was actually there when I took the reference photographs and he was 15 or something. I was telling Dani [Tull] the other day that I was maybe 25 and thinking maybe it’s not so good this 15-year-old is here and this woman is naked, but then we just did it. Gregory was a good friend and he was making these shoes and raincoats that were made of clear plastic and they had fish in the pockets. He was really successful in Japan and there were a bunch of stores that sold his clothes. Giselle was a model I kind of knew through parties. She lived with some guy in a mansion in Beverly Hills, but she was slumming it with us artist types. She wasn’t directly related to Gregory but I talked her into the project and just set them up by the pool at the Poe family home in Brentwood.” 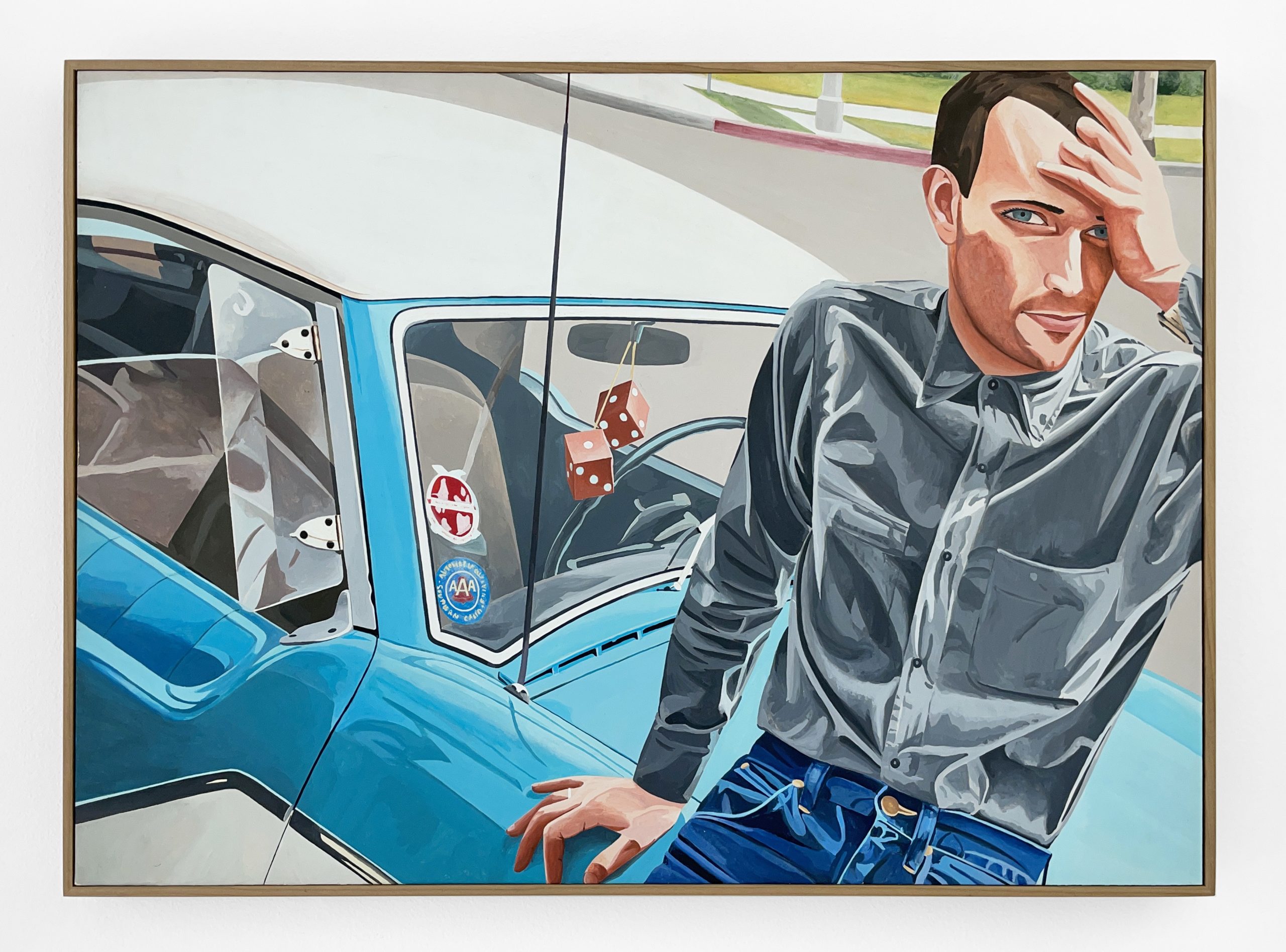 “Jules Bates was a photographer and his girlfriend was Phyllis Cohen, who did this radical makeup for David Bowie and Pink Floyd, she almost made paintings on them. She was the one who gave me all these issues of French and Italian Vogue that I made loose oil portrait sketches from because they were so different from anything in America. I also made a portrait of her in the sketchbook. They had this design group with David Allen called Artrouble, and Jules would build these sets that were like a painting and he would put the Go-Go’s into it or the Weirdos. He photographed record covers like Devo. The car he’s standing next to is a Metropolitan and he had three of them and he was always working on them. He blew his fingers off when he was a teenager and he was killed on his motorcycle shortly after I did that painting in a hit-and-run accident near his studio. It was really sad, but he was a character and a really great photographer. He made this great photograph of all these punk girls like Belinda Carlisle after the famous photo of all the abstract expressionists.” 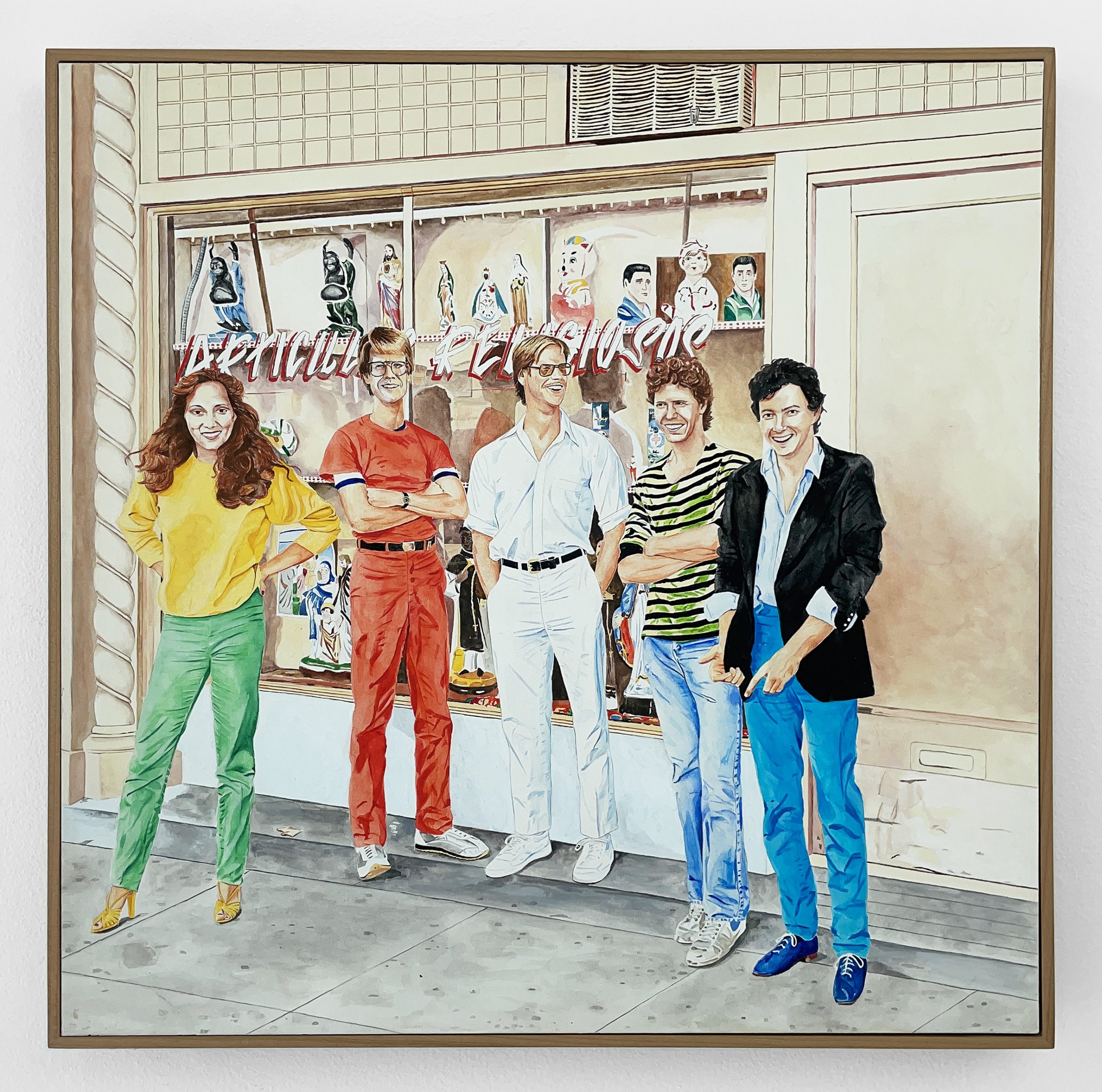 “This was my first painting like this. It was watercolor and gouache before I got into this saturated acrylic. In a way it was more like where I was when I first came here even though I made it in 1980. It was leading into this group of portraits, but I never did anything like this again. I did this colored pencil work of Francine Moore outside the gates of Paramount Studios that was a bit like this and then I started doing landscapes and looser figurative paintings. These five people in front of the religious articles store is this band the Fender Buddies. I first saw them in ‘79 playing downtown with the Party Boys. They were people related to the art scene but making music as well. There music was kind of post-punk, New Wave and they played with Suburban Lawns. It was more accessible whereas the Party Boys were more like an art band. They were a bit crazier.” 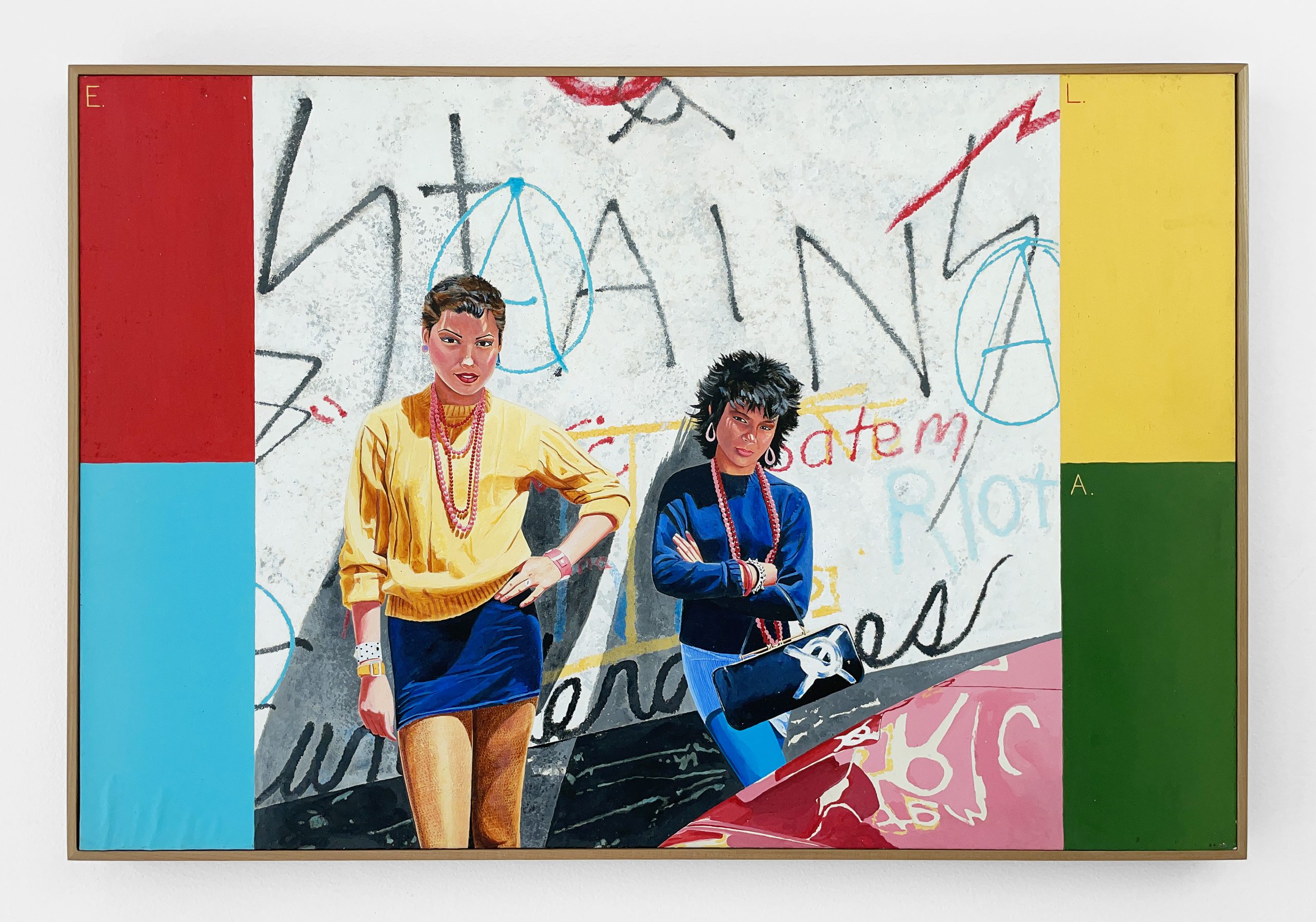 “They were teenagers. I met them at a gig. I saw the Ramones play London for the first time at the Roundhouse in 1976 and it was a sea change in the way people were dressed. It wasn’t like the punk uniform of a mohawk. They reminded me of that moment in a way, but they were Latinas from East L.A. I had them stand in front of this wall in front of this club in Little Tokyo called Brave Dog. They epitomized this post-punk aesthetic but they were younger and they had their own thing happening.” 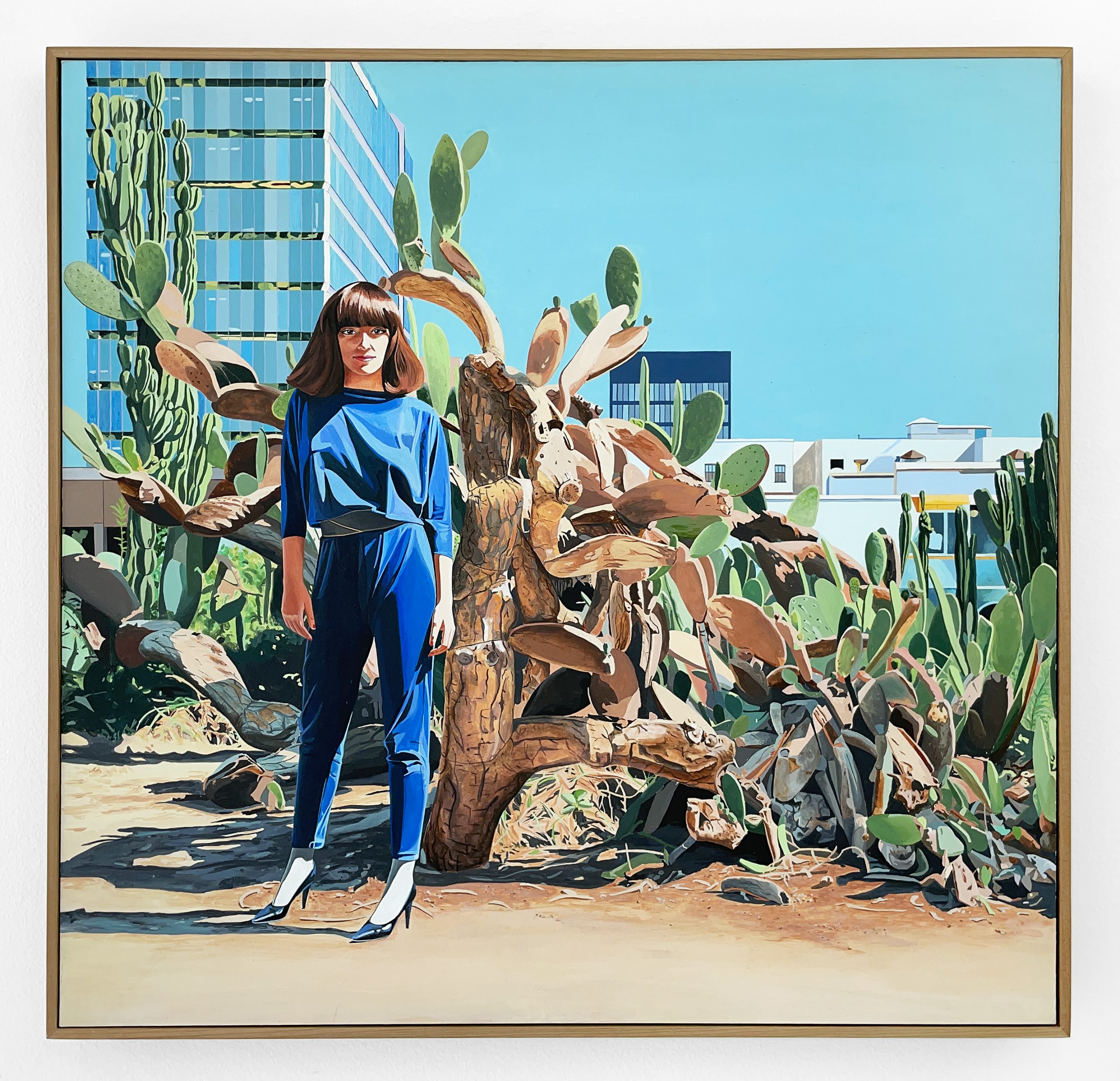 “She’s in two of the paintings. She was in the Fender Buddies but her day job was at Tiffany’s in Beverly Hills. It was her and this woman who went out with the bass player from Fear. The weird thing about Beverly Hills—and it’s what I love about L.A.—is that you have these modernist buildings and then this cactus garden on the other side of Santa Monica. I think when I look at it now and it looks so technicolor and upbeat but she lived near MacArthur Park in a cockroach-infested building. She was from New York originally and even though things were cheaper, there was a nitty-gritty thing everyone was dealing with, there was gnarly stuff happening, but the city was always bathed in light.”