Home Uncategorized Nick Offerman Is Better at Eating Than You Are 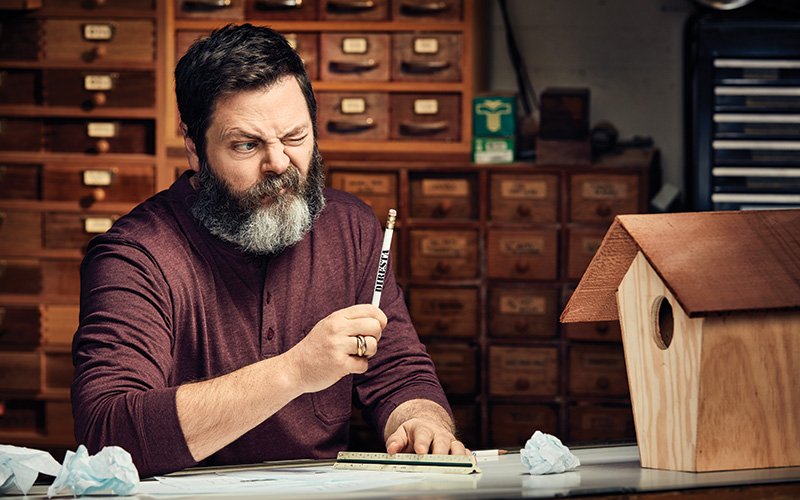 Sit down to coffee with Nick Offerman and you’ll notice a few things about him right away: his salt-of-the-earth disposition (likely a product of growing up in the farming town of Minooka, Illinois), some parallels to his Parks and Recreation character, Ron Swanson (a rabid love of woodworking, whiskey, and meat, not necessarily in that order), and deliberate speech punctuated by a contagious, gravelly giggle (yes, a giggle). All of this is to say, sitting down to coffee with Nick Offerman feels extraordinarily normal, which is a compliment of the highest order.

“The thing I love about Los Angeles is that you can take a swing at anything in this town.”

The 46-year-old actor, writer, and carpenter—he’s owned and operated Offerman Woodshop in Atwater Village since 2001—channels that normalcy for his role in The Founder (January 20), a film about the history of the McDonald’s empire. Offerman stars as Dick McDonald, one of two brothers whose humble San Bernardino burger stand became the most successful fast-food restaurant in the world. “They legit invented fast food,” Offerman says. “California is the Anything Goes State, and L.A. is the capital of that notion.” In keeping with that idea, here he talks sexy mahogany, his personalized version of Monopoly, and his fantasy burger.

Three Angelenos you’d compete with in a meat-eating contest?
I don’t like to eat competitively. So Aziz Ansari—he’s quite a gustatory expert, so he would probably pull out a packet of spice that would allow him to take his time; Joanna Newsom, who is the most pixie-like fairy I can think of; and—I’m trying to think of a notorious vegetarian…

Moby?
And Moby. Thank you. Yes, because then I get to have all the meat. What I don’t want is somebody who’d be great at eating meat, because I don’t want to fistfight someone. I’d rather dance with them, or have a hugging contest.

That’d be more charming, for sure.
Yeah, the thing is, punching hurts.

Wood tokens you’d carve for an L.A. version of Monopoly?
A large silicone breast, David Lee Roth in a 1984 Corvette convertible, one gram of cocaine, an Oscar statue, Jack Nicholson’s nose bandage from Chinatown, and a French dip from Philippe’s.

Not a French dip from Cole’s?
You know, again, why does it have to be a competition? The Bears and Packers: Why can’t we just go enjoy sports? People often say, “What is your favorite whiskey or your favorite cut of meat?” I say if we have either whiskey or meat, we’re doing great. My favorite is whatever’s on the table.

Bygone celebrity whose tweets you wish you could read on “Nick Offerman from Parks and Recreation reads Tweets from Young Female Celebrities”?
It’s a good question—it’s a bit of a stumper. Who are the dumb young cuties of yesteryear? All the women I can think of feel like heroes. I think they’d have badass tweets. So maybe Phyllis Schlafly, the politician who lobbied for the traditional housewife in the ’70s. Her tweet would probably be, “Barefoot and pregnant!👍🏻💯”

If you’d really cofounded McDonald’s, what would be the signature burger?
I adore enjoying the results of experimental burger explorations. And so I would find the most astonishing version of that. It would be super delicious and simple. Grass fed, dry-aged Wagyu beef, a brioche bun fried in a little garlic butter, Gruyere cheese, bacon—not too crispy—mayo, and some raw red onion. There you have it. Goddamn. Let’s order a meal.

You worked on your uncle’s farm in Illinois. Non-farmable L.A. food you wish you could grow?
I wish that I could invent a shrub that would produce the Oinkster pastrami sandwich, known as the Oinkster.

Slabs of bacon or slabs of wood?
Wood. It has much less cholesterol, and I could create beautiful works of art for which I could be paid recompense, which I could then choose to spend on bacon.

There’s a loophole in that question I didn’t anticipate.
Yeah. I’m good at life.

Say you had an Offerman Touch—like a Midas Touch but for wood. L.A. building you’d use it on?
The Wiltern. I’d like to see that thing in mahogany. Mahogany and art deco are a great sexual becoming. It’d also be great to see Disney Hall. The interior is already an incredible peon to Douglas fir. But I’d like to carry that to the exterior with a complimentary wood. I’d go with walnut aesthetically, but I’m going to step out of the fantasy and equip it with the ability to withstand the elements and therefore make it out of teak, which is a pretty endangered hard wood. But let’s say we’ve discovered a Howard Hughes stash somewhere in Pomona. A warehouse full of teak. So it’s cool, it’s a totally green undertaking.

You’re a wordsmith. Describe L.A. in one sentence using the words aplomb, fecund, and wrought.
I have to use all three of those? Can I have a pencil and a tablet?

You may.
Aplomb, fecund, and wrought. Three great words.

I think so, too.
OK, so one sentence?

Yes.
I do well with commas and articles. [3:58 pause.] I’m going to sign off on it. The lasagna is never done being baked, but you have to serve it at some point. “Los Angeles, more than any other center of culture, is the fecund fun house where great works of originality are wrought by muckrakers, tea-heads, and weirdos alike with aplomb.”

Genius.
I wouldn’t go that far. But it’s a legit sentence. That’s all I care about.