Home Uncategorized Nick Lowe at the Grammy Museum: Still the Jesus of Cool 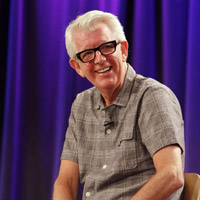 After a lengthy introduction at the Grammy Museum last week, Nick Lowe pretended to hobble on to the stage like an old man, saying he felt about 2000 years old after hearing the summary of his remarkable career. In typical Nick Lowe fashion, he also joked the intro wasn’t quite long enough. His resume is lengthy:  a catalyst of the British punk rock and new wave phenomena as a bass player in the pub rock group Brinsley Schwarz; cofounder and house producer of Stiff Records; producer of Elvis Costello’s first five albums; pop star with landmark Top 40 records; constant collaborator (Rockpile, Little Village); and worldly troubadour with a string of critically acclaimed solo albums.

The Grammy Museum’s Scott Goldman moderated an easy-going and often hilarious conversation with Lowe in the intimate setting of the Clive Davis theatre. Draping his lanky frame on a tall stool, Lowe looked comfortably hip in his short-sleeved black and white shirt and burgundy socks that peeked out between his black trousers and black canvas slip-ons.

He kicked off the night with a discussion of his early influences. Americana artists such as Tennessee Ernie Ford, Howlin’ Wolf, and Ferlin Husky appealed to the young Lowe, who felt the music was “from another planet” and “way more happening” than the square stuff he heard on British Forces radio as an air force brat. He started playing an instrument when he went off to boarding school, choosing the bass because no one else wanted to do it. A friend actually made one for him. “It didn’t work very well, we had to tune it with a pair of pliers. It looked good! It was the right shape!” he said, charming in his clipped British accent.

Lowe realized right away that if you wanted to have any kind of career in music you had to write your own songs. This is how he went about it: By rewriting his heroes.  He rewrote a song by one hero, then moved on to somebody else. Then another. Then he took bits from the first one and some from the third one to create something else entirely, because there really is nothing original in songwriting. He says his first truly original idea astonished him, and it came in the form of the song “(What’s So Funny ‘Bout) Peace, Love, and Understanding” (although he admits pinching a teensy bit from a Judee Sill song called “Jesus Was a Cross Maker”—we’ll have to listen to that song to see what part he pinched).

Next topic was the pub rock scene in London, which he said “had the first stirrings of what went on to be punk.” He called Brinsley Schwarz an “American influenced bar band” that “mixed it up so it wasn’t too precious.” That led to the next step in his career, establishing Stiff Records and becoming a producer. Honestly he says, “back then if you wanted to be a record producer, well that was it, you just show up.” He doesn’t feel there was much more to it than that.  “Everyone who could string together a few chords could get a record deal.”

Lowe told the story—his version anyway—of meeting Elvis Costello, a fan of Brinsley Schwarz who went by Declan MacManus in those days. Elvis says he remembers buying Nick a drink. Nick remembers saying “there’s that strange youth.” Whatever really happened, Lowe went on to produce Costello’s first five records, and Costello had a big hit with “(What’s So Funny ‘Bout) Peace, Love, and Understanding.” “Everyone thinks that Elvis wrote it and that’s fine by me,” he says, gesturing emphatically with his hands. “Without him, that song would have died along with the Brinsley Schwarz group.”

Lowe remembered not being drawn to Costello’s songs at the beginning: “They had too many words! He could have made three songs out of some of them.” Stiff Records initially signed Costello as a writer, but could see he was very special. Asked about what it was like producing Costello, Lowe modestly said he couldn’t recall doing anything (to much laughter). He said he was just there to “mend fences and build bridges…man management. Getting people to think that your idea was their idea.” It was more of a psychological function. He says he’s not a “knob twiddler,” a reference to the fact that producing then didn’t have the technical aspect it has now. If a song came out OK, he was done with it. If it wasn’t coming out OK, he just lost interest. But he said he does find it difficult to listen to his old records because he regrets not working a little harder on them.

The conversation then turned to Lowe’s pop star period, his solo records, and Rockpile, his collaboration with guitarist Dave Edmunds. Because Edmunds and Lowe had recording contracts with different labels, when they played as a band their albums were always credited to one or the other. There is only one official Rockpile album, which was not released until the waning days of the band. “We were our own worst enemies,” he said of the breakup. He added that his 3-4 year stint as a pop star “was pretty good fun. Then it was back to the biscuit factory.” He had mixed feelings when it was over, he said, because he felt he was on the scrap heap but had more to give. He was 36 years old, and he had partied a lot.  He was feeling it was time to clean up, he recalled, and figure out how to step on stage and not feel like an idiot as he got older.

At the time, rock n roll didn’t seem like a genre of music you could grow old gracefully with. Lowe took the advice of Johnny Cash, who was at one time his stepfather-in-law (Lowe was married to June’s daughter, Carlene Carter). It sounds clichéd, but the man in black said one simple phrase that Lowe said made a big difference to him: Just be yourself. At the time he thought, “What the hell does that mean? Who wants to see that?” But Lowe’s been giving interviews recently and he was asked what advice he’d give an up and coming songwriter. He couldn’t think of anything (“what do I know about the music business now?”) when he remembered that advice Cash had given him at the turning point in his career. Just be yourself. If you can figure out how to do that, then it all works.

Lowe described going on to other collaborations and recording what would be several critically-acclaimed solo records. The band Little Village sprang out of the recording of John Hiatt’s album Bring the Family, with Hiatt and Lowe joining Ry Cooder on guitar and Jim Keltner on drums. Lowe said the record was no good and blamed the label for trying too hard. He likes the process he goes through now, making records the old fashioned way, with no computers or “knob-turning,” with real musicians all playing at once, really being able to hear one another. He called the resulting music “handmade.” Not slick.

Lowe’s first album in four years, The Old Magic, comes out this month, and after the discussion and a few questions from the audience, he picked up an old Gibson and played a few songs. “As you get older it’s more fun to sing the blues, it cheers you up,” he said. His voice was as crisp and pop as ever as he illustrated that, playing two new ones, “Sensitive Man” and one we assume is called “Read a Lot,” both of which have a plaintive, sad feel. In talking about the beginnings of his career, Lowe admitted he had no master plan, no idea what he would do if music did not pan out for him. He said he was lucky to “get carried along like a raft on a stream” by the people he met. We hope he stays on the raft as it floats downstream for many years to come.