Home Books Nick Cave is not a Fan of the Sick Bags on United... 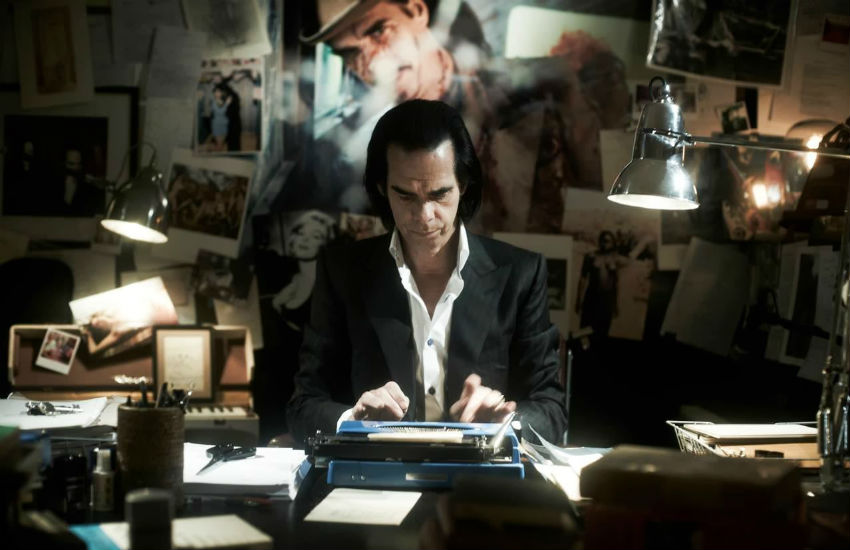 As 20,000 Days on Earth informs us, Nick Cave, frontman of Nick Cave and the Bad Seeds, once of the Birthday Party, spends his days writing. “I awake. I write I eat. I write. I watch TV,” his voice narrates. But, on Wednesday evening at the Egyptian Theatre, Cave shook up his daily activity, not only reading from his new book, Sick Bag Songs, and screening short films inspired by it, but also talking about it with the novelist Tom Perotta and an audience of enthusiasts—some of whom had driven from San Francisco and Alaska to be there. And while he wasn’t quite as prolific a talker as he is a writer—or singer, for that matter (but how could he be?)—the conversation in the dark space did meander to some places that even Cave was not ready to go.

The first unusual object of discussion was the book itself. The idea generated from Cave putting down notes for songs on the back of plane sick bags (some of which are reproduced in the actual book) while on tour with the Bad Seeds. However, soon, it grew into a larger project with 22 chapters, one for each different location of the 2014 tour. Sick Bag is a collision of “written in prose and rhyming poetry and free poetry,” he said. But it should be thought of as fiction, not autobiography, he is quick to declare.

“I’m a fiction writer if I’m writing,” he said. “For me, it’s a work of fiction about a rock star who looks a lot like me on tour in America last year.”

In a section he read, he featured his influences, but hardly kowtowed to them. While the poem name-checked John Berryman, Philip Larkin, Emily Dickinson on the literary side, and Lou Reed, Bryan Ferry, and Johnny Cash on the musical, they were portrayed as miniature “lollypop ladies with their severed heads on pikes” that Cave keeps trapped in his sick bag.

The sick bag is a less surprising medium and motif than it might first appear, according to Cave. It’s what you reach for on a plane when you have an idea—it’s an untouched piece of paper. “What I’ve been doing all my life,” he said, “is writing songs on sick bags.”

Unsurprisingly, Cave has become a sort of sick bag connoisseur. “It becomes fascinating to see what they put on them,” he says. “United plastic coats them so you can’t write on them. Fucking annoying that is.”

Annoying particularly because it got in the way of his work. Falling squarely into the category of the people who “stop to work” rather than those who “work to stop,” as he puts it in his Songs, his work, he says, “gives my life meaning, apart from my lovely children, who are here somewhere.”

“I feel like I’m in the business of writing and doing what I’m doing for the duration, for the long haul,” Cave said.

Indeed, he even agreed to write out some lines of his for an audience member to get a tat, but music seems to no longer preoccupy him as it once did. Cave admitted, “I hardly listen to music.” Questions about the music industry were invariably answered by Cave with “I got this manager…”—which by the end of the night was eliciting giggles from the audience before he had finished speaking.

But when asked about to speak about his creative process he was rather quiet about it. Along with revealing that he does not have a secret to writing, he said that he did not want to discuss what he had recently been reading or visual artists who influenced him (though he did give a shout out to the “other Nick Cave”). When asked what piece of advice he would have given to his younger self, he avoided the question by saying, “I don’t know, really. I don’t think my younger self would have listened.”

However, Cave continued to try to answer questions, even after the handlers tried to cut him off. “I do like the ability to speak intimately in an intimate situation. I actually really enjoy it,” he said. “Do I look like it’s really excruciating?”