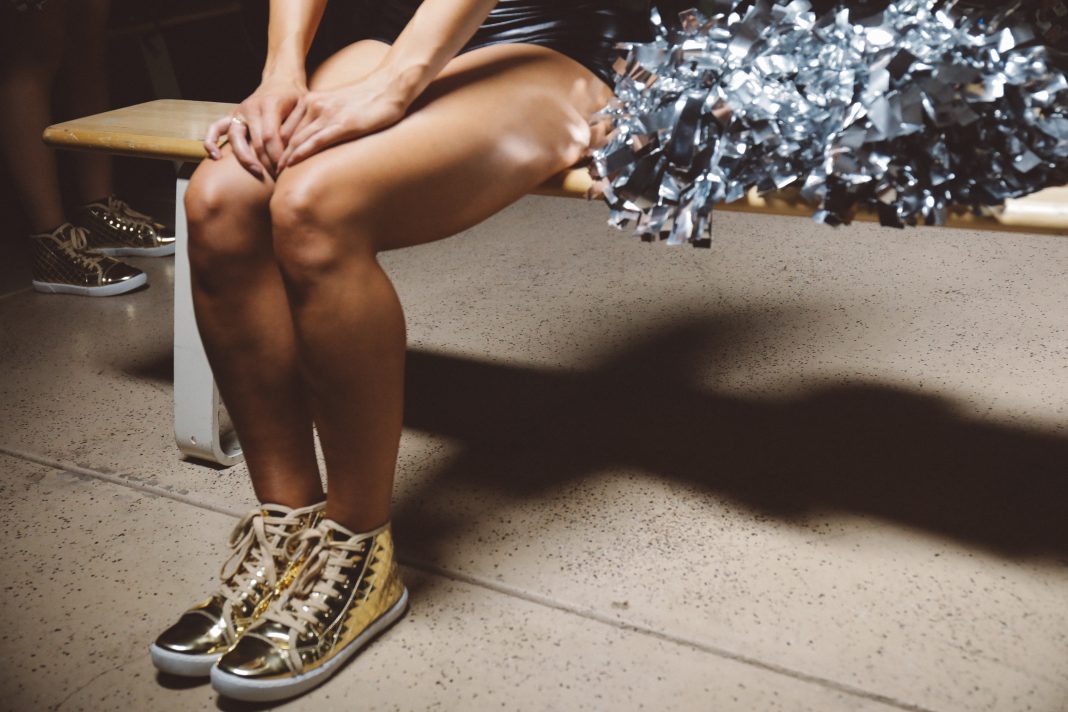 The National Football League is not short on cash. In fact, it’s revenue continues to grow year after year, surpassing the $8 billion mark in 2017. Still, it’s been reported that many of the women performing on the sidelines take home minimum wage—if that.

In 2014, documentarian Yu Gu came across an article in the Los Angeles Times about Lacy, a former cheerleader for the Oakland Raiders who was suing the team for wage theft. She was the first cheerleader to break the silence around the league’s employment practices.

Many NFL cheerleaders put an exhausting amount of time into their work for little pay. One former cheerleader told Refinery 29 that she worked between 30 to 40 hours per week although the wage reported by many cheerleaders is as little as $75 to $150 per game (plus additional money for corporate appearances). Teams have been notoriously secretive about cheerleader wages.

“As an immigrant, it shattered my idea of the American Dream,” Gu says via email. “The cheerleaders are female icons of American beauty and spirit, yet they are [being] exploited in this extreme way.”

That’s where it all began. Gu drove up to Oakland and met with Lacy and her attorneys to find out more about what made her speak out. Gu was struck by her courage, she says, “and that made me follow her journey.” In the summer of 2014, shortly after Gu met with Lacy, producer and writer Elizabeth Ai became part of the fledgling project. And in 2016, Ai brought on impact producer Jin Yoo-Kim.

Five years in the making, their documentary, A Woman’s Work: The NFL’s Cheerleader Problem, explores the ways in which football and feminism collide, and asks bigger questions about the NFL’s alleged employment practices.

The film follows Oakland Raiderette Lacy, Krystal of the New York Jets’ Flight Crew, and Maria of the Buffalo Jills. All three women were involved in lawsuits against their respective teams. The Raiders and Jets paid out settlements to their cheerleaders and the former agreed to pay cheerleaders California’s minimum wage; the Bills did away with their squad altogether.

Now in post-production, the documentary is meant to shed light on the women’s stories but also to educate young women on pay equality in order to close the gender pay gap. “While the film is about NFL cheerleaders specifically, it’s also about women’s rights, feminism, and justice,” says associate producer and social media strategist Samanta Helou Hernandez.

Via email, Gu, Ai, and Yoo-Kim answered questions about the cause, the women, and what people should keep in mind when they’re watching a game. (The interview has been edited for length.)

Can you walk us through the research process for the documentary?

Jin Yoo-Kim: There was a lot of coverage of the lawsuits but what was interesting was that the big questions were not being asked–why and how could something like not paying cheerleaders happen for so long? Asking these big questions also expanded who we interviewed. [Impact producer] Elizabeth Ai suggested we reach out to politicians, union leaders, reporters, and Yu flew around interviewing people and found amazing archival footage that affirmed the historic nature around the complicit culture of devaluing cheerleaders.

The documentary, in your words, is a film where “football and feminism collide.” What do you mean by that?

Yu Gu: In this David and Goliath clash, the women in our film experience an awakening. They find their unique strength and voice. Lacy and Maria come to understand and define for themselves what it means to be a “feminist,” what it means to fight not only for the value of their own work, but also for their future daughters, granddaughters, and the rights of women they’ve never met but nevertheless share a common bond.

Elizabeth Ai: The world of football is inherently masculine but what most people don’t know is that nearly 50 percent of the NFL’s audience is women. Female fans have been exponentially growing since fantasy football was introduced and are responsible for contributing in large part to the NFL’s $8 billion dollar revenue. The NFL continuously fails at every opportunity to exhibit social responsibility to this growing fan base.

What were the employment practices that the women you spoke to for this film experienced as NFL cheerleaders?

Gu: The only visible women on the field, NFL cheerleaders are required to practice 20 hours per week, work 12-hour shifts on game days, train on personal time, while earning between $0-$5 an hour. According to 2014 data, broadcast airtime of NFL cheerleaders alone is worth over $8 million dollars per season. NFL commissioner Roger Goodell publicly announced his plan to grow the NFL’s annual revenue to over $25 billion by 2027. American football represents the ideal patriarchal (white) corporate power structure. As America still reels from de-industrialization and the loss of middle-class jobs, we’ve seen stories of anti-union, anti-worker tactics at factories and plants, construction and the service sector. We examine these classic power dynamics with an unlikely protagonist, an American icon, the cheerleader—glamorous, sexy, endlessly enthusiastic and optimistic. Since the 1950s, the sexualized body of the female cheerleader has become a moral and ideological battleground.

As an ex-Dallas Cowgirl explained, “We were the ultimate male fantasy, girls that you wanted to take home to mom–but you wanted to have sex with us on the way.” While football players perform choreographed violence for millions, should women who use their sexuality and their bodies to earn a living be exploited? Do they deserve a workplace free from sexual harassment? NFL teams are now required to interview women for executive positions but should women only be respected when they measure up to the male standard, while stay-at-home moms and traditionally women-centric occupations like teaching are devalued and dismissed? [With A Woman’s Work] we aim to expand the discussion about flawed gender-relations in America’s most beloved pastime in order to inspire cultural shifts.

When people watch the Super Bowl on Sunday, what do you hope they’ll keep in mind with regard to this issue?

Gu: Football is my favorite sport to watch and I believe in its power to bring people together, but I want fans to unite in changing something they love for the better. I want them to think about everyone who participates in the Super Bowl as working people just like themselves, from players to cheerleaders. We should unite around the values of mutual respect, community, team work and truth, instead of green, control, devaluation, misogyny and hypocrisy. The Rams are heavily publicizing their two new male cheerleaders, but I hope it doesn’t continue the tendency to ignore female labor while celebrating male labor. [For example], in industries dominated by women like nursing, men still tend to get paid more. These cultural notions lead to real economic consequences. As fans, let’s ask more questions, let’s not take what we’re told at face value.

RELATED: The Rams’ Super Bowl Victory Has Been Foretold by a 1978 Movie

A Look Back at the Long, Winding Road to the Opening of SoFi Stadium