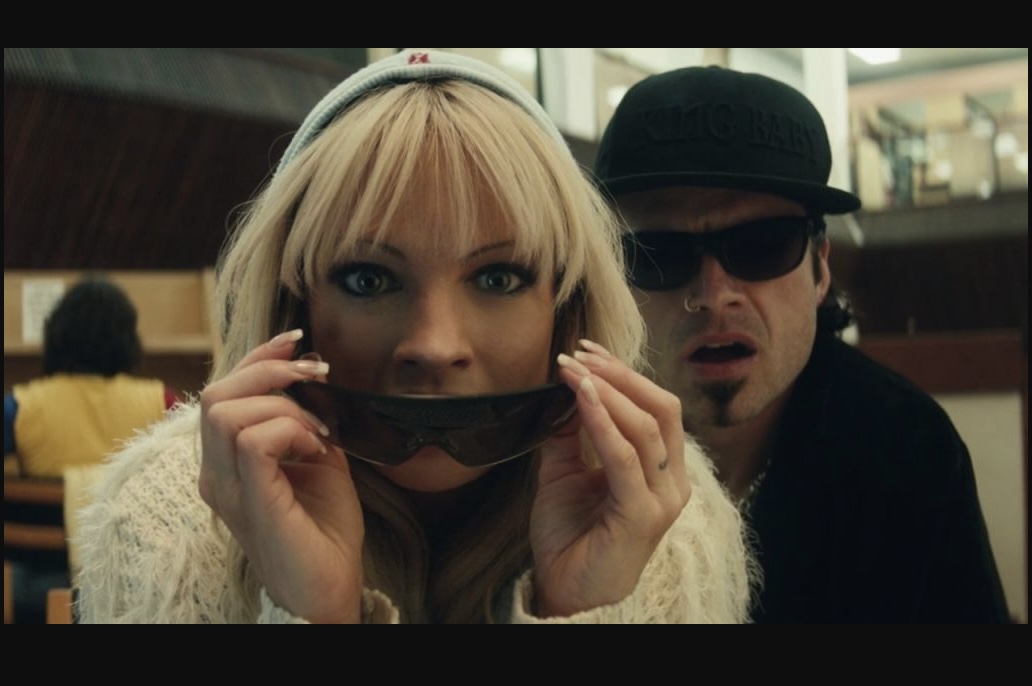 Pamela Anderson was robbed. The titillating new series Pam & Tommy (Hulu, Feb. 2nd), which purports to tell the true story behind the first viral celebrity sex tape by way of a disgruntled contractor, a seedy Valley porn scene, and a giant animatronic dick, makes one thing clear: The intimate honeymoon Hi8 footage taken of Baywatch babe Pamela Anderson and bad boy Motley Crüe drummer Tommy Lee was not staged and intentionally leaked in 1995 as a publicity stunt, as most suspected at the time. It was real and it was stolen. Over the course of the eight-part series, we see the toll the theft and ensuing media circus took on the couple, and how it eventually lead to the unraveling of their marriage. But most of all, we see that Pamela Anderson was the real victim here, shown through the ensuing media frenzy of glib, cheap shots at Pam’s double Ds and oral skills and Lee’s monster hog, in lieu of anything like a serious examination of its ramifications on her privacy or personal life, much less her career.

Pam & Tommy achieves this smartly by wrapping a sleazy bow around the jaw-dropping hypocrisy that used to swirl around issues like consent and privacy, which went something like this: How could a woman who talked so openly about sex in the press, posed numerous times for Playboy, and ran slow-motion on a beach in a bathing suit on mainstream television actually care about, much less be damaged by, millions of strangers watching her most intimate acts? This through-line alone is guaranteed to place Anderson alongside other starlets of the late-’90s and early aughts’ who were targeted by a puritanically vicious media only to be reexamined decades later. In a post #MeToo era, Lindsay Lohan, Paris Hilton, Jessica Simpson, and Britney Spears all recently found new sympathy from activists, and iconic status from Zoomer audiences revisiting Y2K fashion and reclaiming and elevating so-called bimbo culture.

But there’s a catch here, and it makes for somewhat uncomfortable viewing: The real Pamela Anderson wants nothing to do with the show. She refused to speak with actress Lily James, who contacted Anderson for research for the part to no avail. Anderson, who is alive and well in Vancouver, has denounced the show as a cheap knockoff she has no plans to watch. Tommy Lee, on the other hand, was more than happy to speak to Sebastian Stan about portraying him, and told the press he’s “stoked” about the series, and finally getting long-overdue credit for starring in the first-ever celebrity sex tape to break the internet. “It’s a cool story and people need to know,” Lee told NME, which tells you just about everything you need to know about how differently the scandal played out for each of them.

That’s in large part due to the performance of Lily James, a marvel not just for the four-hour daily transformation it took to faithfully recreate Pam, or her uncanny ability to mimic her slightest mannerisms (feel free to compare against old YouTube clips of Anderson on Leno). But because she genuinely seems to have connected to the role—she says she found the experience of inhabiting Anderson’s sensuality by donning a chest prosthetic, spray tan and wig liberating, James wanted Anderson’s approval and eagerly read through her interviews and books. She says she was angered by the misogyny and shaming Anderson experienced.

Some of that shaming came from Tommy Lee himself. Played with expert holdover hair- metal douchiness by Sebastian Stan, Lee first echoes the media’s blithe attitude as Pam grows increasingly mortified at being violated. He’s pissed about being robbed but initially doesn’t see what the big deal is about the tape, telling her it’s nothing anyone hasn’t already seen from her. Later, he tries to convince her the leaked tape is just as awful for him, and maybe it is in his view, but that doesn’t track on the show or in real life. We see him mostly high-fived and congratulated, and Crüe bassist Nikki Sixx (Iker Amaya) tells him at one point there are far worse things for a guy, after all, than being known for having a monster hog. (We see that monster hog multiple times — in one scene, Lee even debates his own dick in full view, with it curving and bending in response, with an assist from the no fewer than four puppeteers on hand to animate it. )

The outrageous sleaze here is incredibly watchable, but ultimately paints a portrait of a frantic, devastated woman — one experiencing motherhood for the first time, too, and with a history of being abused — reeling after each new breach of privacy, hoping things can’t get any worse.

But it does get worse: Once that hog is out of the pen, there is no stopping that tape.  Initially sold online around California on VHS, it was then pirated and hawked in parking lots and then streamed online for the entire world to see. Eventually, a video version was released by Vivid Entertainment. The couple never profited financially from the tape, that we know of (settlement details with company IEG who bought the rights remain confidential). While Lee is hopped up on revenge, sending an army of private detectives, motorcycle gangs and legal muscle to rain down on their aggressors, Anderson is the only person in her orbit who seems to grasp that Lee’s move will only generate more attention, and ultimately make things worse for both of them.

She’s half-right: Anderson’s career does suffer. Even before the tape turned up, she was routinely derided for her surgical enhancements, outrageous attire, and for habitually dating dirtbags (Brett Michaels, Scott Baio). Afterward, she was a bigger sex symbol but also a bigger punchline, just as more buttoned-up shows like Ally McBeal were quickly making shows like Baywatch passé.

In contrast, Tommy Lee’s passion for hot blondes (Heather Locklear, model Bobbie Brown, best known for starring in the Warrant video “Cherry Pie”) and bad-boy status was already celebrated from his days in the Crüe (his 2001 autobiography The Dirt would only seal that deal). But his career was already well past the band’s biggest hits of the late ’80s, unseated by hip-hop and grunge. Even if, as the series shows, he’s truly haunted by Nirvana and its many imitators, there’s little evidence showing that he suffered from the leaked tape outside of the conflict it (and he) caused within his marriage. The couple would divorce after three years, two children, and charges of domestic violence against Lee leading to a six-month jail stint for him. A brief attempt at a reunion would fail, and Pam would go on to marry Rick Salomon, best known for leaking his sex tape with Paris Hilton in 2003 when Hilton was just 19.

Given all that, there’s a whiff of sad irony about the fact that Pam & Tommy addresses important questions around consent and privacy with such nuance, while inadvertently raising them about itself. There’s certainly a story worth telling here, and it’s one Pamela Anderson may come to appreciate in the reframing. But you can’t help realizing while watching that here we all are again on the internet, talking about the sex tape and the most intimate details of a woman’s private life — the one thing all along we know she just wanted to stop.