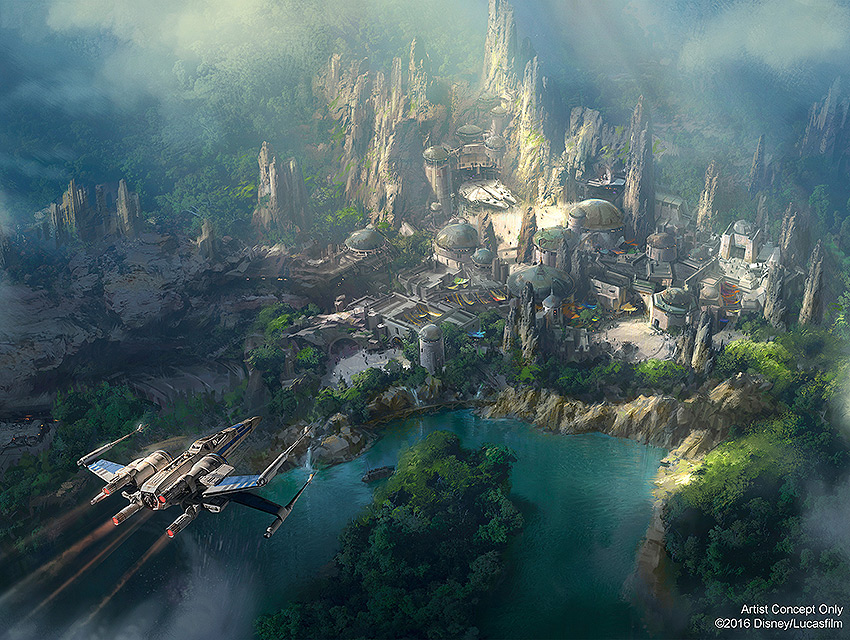 “Hmm! Adventure. Hmmpf! Excitement. A Jedi craves not these things,” Yoda says to Skywalker in The Empire Strikes Back. Good thing we’re not Jedis, so we’re allowed to be all kinds of giddy over the newly-released rendering of Star Wars Land, currently under construction in Disneyland.

Today, the Disneyparks blog released a first look at what the immersive park will entail. Look closely and you’ll see the Millennium Falcon resting in a cargo bay, where guests will pilot the hunk of junk across the galaxy. Other expected attractions—a replica of the cantina, an enactment of a battle between The First Order and the Resistance—will be nestled somewhere amidst the markets, landing pads, and buildings erected among the otherworldly (yet familiar) rocky landscape. And that X-Wing in the foreground—could it signify another rebel attraction?

The artist rendering depicts Star Wars Land situated along Frontierland’s Big Thunder Trail, where one of the entrances will be. Big Thunder Ranch, Big Thunder Ranch Barbecue, Big Thunder Ranch Petting Zoo, and Big Thunder Ranch Jamboree have all been permanently closed to make way for the new land (RIP, but not mad about it). And it appears as if the river will be extended along the edge of Star Wars Land, where, we’re guessing, it will likely no longer bare the name “Rivers of America.” The 14-acre land is the largest-ever single-themed land expansion at Disneyland Resort.

Ground broke for construction in April, but Disney has provided no word yet on an official opening date. Until then, we’ll hold our breath in a most un-Jedi-like fashion. Check out a giant delightful version of the photo here.