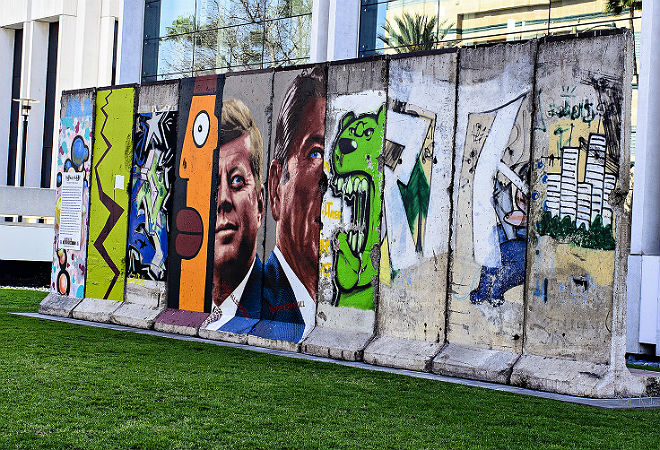 Across the street from LACMA amid a bevy of food trucks, the lawn of 5900 Wilshire Boulevard showcases a notable work of art from almost 6,000 miles away: ten panels of the Berlin Wall. Imported from Germany in 2009, the concrete blocks comprise the largest segment of the iconic barrier outside of Europe. The installation was overseen by the Wende Museum, a small institution that houses Cold War artifacts in a nondescript Culver City office park.

Over the years, food truck enthusiasts, passers by, and employees who work in 5900 Wilshire (where Los Angeles magazine is headquartered), have gotten used to the familiar images. This week, they’ll have something new to look at.

On Friday, to commemorate Nelson Mandela Day (July 18), muralist Kent Twitchell will unveil a portrait of the South African anti-apartheid activist on the Berlin Wall. Why marry the civil rights pioneer and the Cold War artifact?

“Nelson Mandela was a universally beloved figure,” says Joanne Kim, manager of programming and community development at the Wende Museum. “[The city of Los Angeles and Wende Museum] wanted to activate the Berlin Wall pieces in a way that’s meaningful for the community, that keeps them engaged with the community.”

Twitchell will be on hand at 9:30 a.m. to reveal the portrait, and the Inner City Youth Orchestra of Los Angeles will perform at the event, which everyone is welcome to attend.