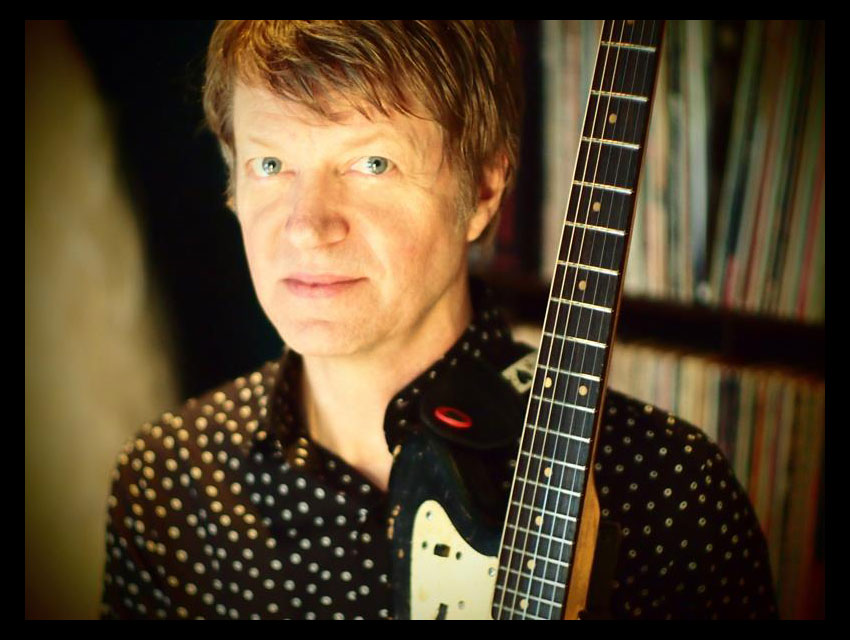 The United Sounds of Los Angeles is a monthly series from music writer Matthew Duersten that delves into the most underappreciated, obscure, and indispensable L.A. albums.

The Backstory
Avant-jazz guitarist Nels Cline and pop artist Ed Ruscha both evoke Los Angeles’s uneasy codependency between highbrow and lowbrow forms of artistic expression. In a 1999 interview, Cline stated that growing up in West L.A. during the ‘60s explosion of psychedelic music and irreverent Pop Art (spearheaded by Ruscha, among others) led him to develop into “the king of aesthetic dichotomies” until he was almost forty years old. While his twin brother Alex became a gifted visual artist and jazz drummer, Cline endeavored to incorporate improvised music with improvised art, best expressed in his collaborations with painter Norton Wisdom. In many ways, Cline’s approach to in-the-moment creativity mirrored Ruscha’s. “My works are a lot of the time based on instant inspiration and sometimes foolish things that bounce off of walls and off of the pavement and I just grab these things and use them,” the 76-year old painter explained in an NPR interview.

Enter poet David Breskin, a renaissance mensch known for his production credits with guitarist Bill Frisell and saxophonist John Zorn. Impressed by a2002 poetry/music/art hybrid Breskin had assembled around the abstract works of Gerhard Richter, Ruscha invited Breskin to do the same with some of his lesser-known paintings from the ‘80s and ‘90s: The Silhouettes and Cityscapes. For the music portion, Breskin first approached L.A. super-producer Jon Brion, but Brion begged off after pleading unfamiliarity with Ruscha’s work. Brion recommended Cline, who had joined the alt-rock group Wilco in 2005 and was “well familiar” with Ruscha from working for years at an art bookstore in Santa Monica.

For DIRTY BABY’s first half, Breskin tasked Cline with scoring “a shaggy-dog time-lapse history” of Western expansion. For Part II, his direction for Cline was a bit more constrictive: 33 pieces, each no longer than a minute-plus. Cline came up with, in his words, “more than a string of amuse-bouche”; he created a sound-byte rendering of America’s wars in the Middle East to accompany Breskin’s poetry, which was composed in the concise and airtight form of Arabic ghazals.

Cline built a 15-piece ensemble around the spine of his trio The Nels Cline Singers. “Much had to be accomplished in little time—the entirety was recorded in three consecutive days, in January of 2008,” Cline explained. “I decided (and David agreed) that the vast majority of both groups needed to consist of musicians living in Los Angeles, my rather disrespected hometown.”

Why You Should Listen
Growing up in the shadow of Hollywood must have somehow seeped into Cline’s radar: DIRTY BABY is perhaps his most cinematic piece of music and indicative of a sweeping vision he has only hinting at in his myriad solo and group projects. Similar to other soundtrack composers like Michael Danna (The Sweet Hereafter) and Brian Keane (The Way West), Cline draws parallels between conflicting forms and comes up—despite the America-centric settings of Ruscha’s images and Breskin’s poetry—with music both familiar and otherworldly, unmoored from a specific place or time.

The Aftermath
The music of DIRTY BABY was a critically acclaimed and a milestone in Cline’s prolific career. After seeing a live performance of DIRTY BABY at the 2010 Angel City Jazz Festival, The L.A. Times’ Chris Barton dubbed it “a perfectly elliptical sort of protest music.” At the same performance, Breskin commented about how boxes of the DIRTY BABY book, released to compliment the CD, were seized at U.S. Customs after being shipped by its Italian printer; apparently, the book’s title scrawled on the boxes convinced authorities they had found a cache of child pornography.

Signature Tracks
SIDE A: “Dirty Baby” – Cline’s dream ensemble of Left Coast players rise to the challenge with the epic and ambitious 42-minute title cut, which splits itself into six different mini-suites that range from white squalls of noise to sweeping lyrical expanses that recall composers like Virgil Thomson and Aaron Copeland.

SIDE B, TRACKS 9-15 – As Breskin’s terse ghazals turn swagger-bragging and gangsta-graffiti hostile (“You Will Eat Hot Lead,” “Be Careful Else We Be Bangin’ On You”) “I Thought I Told You That We Won’t Stop,” “You Talk You Get Killed”), Cline’s short bursts of bliss and vinegar call upon bebop bass lines, art-damaged surf guitar, chugging doom-metal, free-jazz freakouts and echoes of the experiments of John Cage and the collaborations of Gil Evans and Miles Davis.