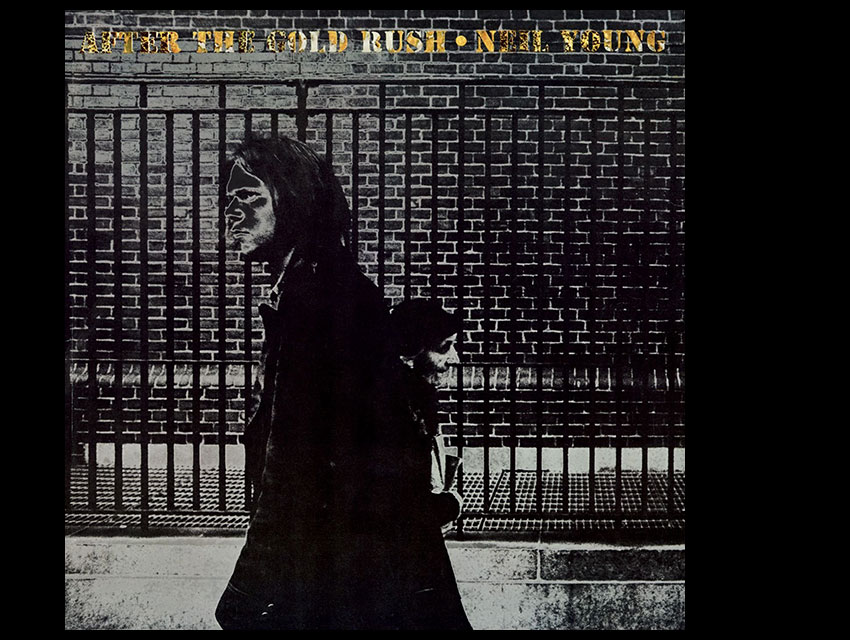 The Backstory
For decades, Laurel Canyon and Topanga Canyon have been the twin pillars of Southern California rock bohemia, albeit in different ways. Laurel, with its proximity to the funhouse-mirror cavalcade of the Sunset Strip, was where newly minted rock stars could indulge their cash advances. Topanga was the place they retreated to escape the chaos.

Enigmatic Canadian folkie Neil Young moved in both circles. In 1968, after a taxing breakup with Sunset Strip stalwarts Buffalo Springfield, Young decided that he “just needed to get out to the sticks for awhile and relax.” Embarking on a solo career, Young used his $17,000 advance to buy a redwood abode at 611 Skyline Trail. “Morning on the deck began with coffee overlooking the canyon, watching everything start to move below as the day unfolded,” Young recalled in his 2012 autobiography Waging Heavy Peace. “The scene in there was always stimulating, full of the color of the canyon, with the artists and other local characters, rug dealers and beautiful hippie girls, and I really enjoyed my breakfasts.”

Serving him those breakfasts at the Canyon Kitchen cafe was a strawberry-blonde Sicilian eight years his senior named Susan Acevedo. Waitress and customer began a romantic relationship that led to marriage less than six months later. Acevedo introduced Young to the Topanga intelligensia: artists Wallace Berman (publisher of the prototypical ‘zine Semina), Roland Diehl (who painted the cover of Young’s 1968 solo debut), and George Herms, and actors Dean Stockwell and Russ Tamblyn. Stockwell had just returned from filming The Last Movie in Peru with Dennis Hopper, and the experience inspired him to collaborate with his friend Herb Berman (no relation to Wallace) on a screenplay of his own. “[The script] was all about the day of the great earthquake in Topanga Canyon when a great wave of water covered the place,” Young later told Mojo. “It was a pretty off-the-wall concept.”

Stockwell asked Young, who was suffering from writer’s block, to provide the film’s soundtrack. Young originally planned to record the album with his band Crazy Horse, whom he had first encountered back in Laurel Canyon. Their sloppy, Promethean, gut-instinct rock was the antidote to the studio perfectionism he felt had marred his first solo album and his high-profile work with Crosby, Stills, Nash & Young. (Young dubbed it “overdub city.”) Unfortunately, Young had to scrap the initial sessions after laying down a few tracks at Sunset Sound Studios in August 1969 when it became obvious that guitarist Danny Whitten was sliding into heroin addiction.

Instead, Young constructed a chimerical mix of Crazy Horse and CSNY members. He also added a 17-year-old guitarist named Nils Lofgren, whom he had met backstage at a Crazy Horse show in Washington D.C. Lofgren was shocked when he got the call to come out to Topanga, especially when Young added a caveat: “I don’t want you to play guitar, I want you to play piano.”

A terrified Lofgren found himself squeezed into Young’s cluttered cellar studio with professional musicians he barely knew. “It was a very inspired record done under the worst-possible conditions,” recalled producer David Briggs in a 2009 memoir. “A lot of those songs were written right on the spot. Neil would sit upstairs in the living room working on a song and then we’d all go downstairs to the basement and turn on the tapes and away we’d go.” Bassist Greg Reeves showed up at the sessions with his face painted gold like a witch doctor. Pianist Jack Nietzsche was a famously erratic presence. “One second [Jack] would be sitting there driveling away about how much he loved Neil’s music,” Lofgren told writer Barney Hoskyns. “The next thing he’d be yelling and screaming at him, calling him names and refusing to play.” To make matters worse, Young’s marriage was crumbling.

“The Sixties were over when After the Gold Rush was made, so there was a lot of momentum,” Young said in 2009. “But I was enjoying my music. I can remember stepping outside of studio and standing down in the carport… listening to the music coming down the… stairway thru the open door with the wind blowing and listening to it and going, ‘I think I’m there, I’m done.'” But he still had his fears. “God it really sounds good to me, but it’s been so easy to do,” he confessed to Lofgren as they sat on the porch at night. “I wonder if people are gonna get it.”

Why You Should Listen
What’s remarkable about Gold Rush is that it contains the musical seeds of every record Young would record for the rest of his career, a three-way split between country (the cover of Don Gibson’s weeper “Oh Lonesome Me”), stark acoustic folk (“Tell Me Why”), and lumbering rock tunes (“Southern Man”). His eccentricities were all over the album, which included a foldout insert with lyrics in Young’s chicken-scratch scrawl and a roster of songs that didn’t make the album. Even his choice of cover photo, a solarized shot of Young passing an old woman in Greenwich Village, shocked its photographer, who thought it an unusable throwaway.

Despite being a soundtrack with no movie, After the Gold Rush fell into the tradition of Vietnam-era “hidey hole” albums like Dylan’s Basement Tapes, Love’s Forever Changes, and the Band’s second album: basically, albums made in comfortable isolation away from the public chaos of the times. Gold Rush vividly evoked Topanga rusticity—burr-encrusted patched denim, scorpions in your sleeping bag, coyotes stealing your free range chickens, back-porch jam sessions, creaking screen doors—before any of it hardened into wimpy singer-songwriter cliché. There’s audio bleed of people talking and dogs barking in the background, which Young loved. “Cinema verité? I got into audio verité,” he crowed to writer Jimmy McDonough. “The concept of capturing the moment on the camera? I just translated that right into the recording studio. Why not make records like that?”

In the end, even Nils Lofgren had to admit: “Neil was right about the piano… He wanted a plain, simple style—and it worked.”

The Aftermath
Gold Rush inaugurated the first golden decade of Young’s career. “Crosby, Stills, Nash, and Young put my name out there,” he admitted in 1975. “But After the Gold Rush was the turning point.” The ersatz soundtrack would peak at #8 on the Billboard Pop Album chart, yielding two moderately successful singles.

Music critics of the time, however, were nonplussed. “None of the songs here rise above the uniformly dull surface,” wrote Rolling Stone‘s Langdon Winner. “In my listening, the problem appears to be that most of this music was simply not ready to be recorded at the time of the sessions.” Many, including Winner, had a problem with what would be Young’s ultimate trademark: His high, quavery voice.

Unfortunately, two casualties of the sessions were Young’s marriage to Susan Acevodo and their idyll in Topanga. “I eventually got out of that house because I couldn’t handle the people who kept coming up all the time,” Young later told Cameron Crowe. “There was too much going on. I had too many fucking people hanging around who really don’t know me. They were parasites whether they intended to be or not. They used my money to buy things, used my telephone to make their calls. It hurt my feelings when I reached that realization.”

Signature Tracks
“Only Love Can Break Your Heart” – This ramshackle barroom waltz is the epitome of early ’70s Young. Supposedly about the breakup of his friends Joni Mitchell and Graham Nash, the song was given an unusual synth-pop treatment in 1992 courtesy of British trio Saint Etienne.

“After the Gold Rush” – According to David Briggs, Young wrote this heavily allusive, somewhat corny and vaguely steampunk environmentalist ballad in just half an hour. According to Young, it and “Cripple Creek Ferry” were the only songs on the album to be directly inspired by Stockwell’s script. It has been covered memorably over the years by Dolly Parton, Patti Smith, and Radiohead’s Thom Yorke.

“Don’t Let it Bring You Down” – Allegedly written about an uncomfortable trip to London with CSNY, this song’s dark and ominous undertones come thanks to the same tuning (D-modal) also heard on “Ohio” and “Mr. Soul.”

Thomas Schaller’s Paintings Prove Once and for All That Yes, L.A. Has Seasons