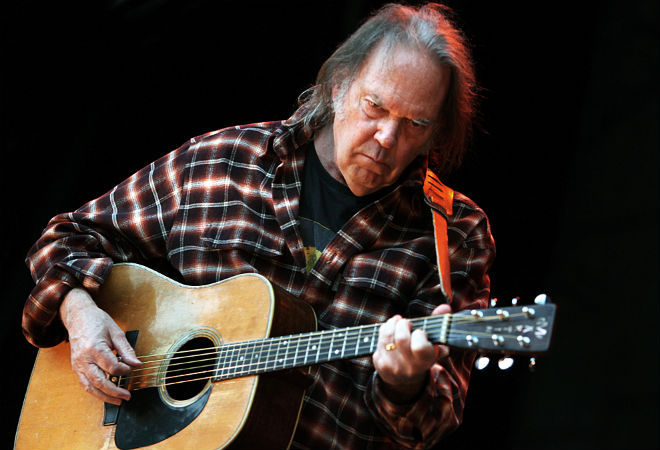 Carnegie Hall got him first but we’re stoked to report that rock legend Neil Young will be passing through Los Angeles. Young will play three gigs at the Dolby Theatre in Hollywood on March 29-30 and April 1. Tickets, which went on sale today, flew off the virtual shelf faster than you can say, “Keep on rockin’ in the free world.” The two first gigs are already sold out but there are still tickets left for the April 1 concert, which was just announced this morning.

The Los Angeles Times reports that the concerts will feature Young performing solo, mirroring the sold out four-part series the 68-year-old troubadour played at Carnegie Hall earlier this year. Those who score tickets can expect material from every era of Young’s vast oeuvre but the emphasis will be on his work from the 1960s and ’70s.

Young achieved breakthrough success in the latter half of the ’60s while performing with Los Angeles-based country rock pioneers Buffalo Springfield, who were inducted into the Rock and Roll Hall of Fame in 1997. In 1968, when the band imploded due to creative differences, drug abuse, and legal issues, Young launched his solo career with a self-titled debut album and later began working with folk rock all-star team Crosby, Stills & Nash. Songs like “Old Man,” “Heart of Gold,” and “The Loner,” from Young’s early repertoire, became instant classics and cemented his place in the annals of rock n’ roll history.

Young is currently at work on a new album entitled A Letter Home; it has no official release date but is due out “soon” via Third Man Records, the label of The White Stripes frontman Jack White. Young remains secretive about the album. The only information about it comes from a cryptic note on his website stating that A Letter Home is, “An unheard collection of rediscovered songs from the past recorded on ancient electro mechanical technology.” As long as he’s not recording with Mumford & Sons, we’re fine.