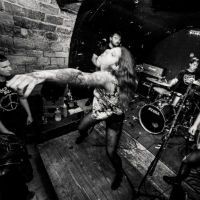 Jenny Angelillo flies from one end of the stage to the other, wild-eyed and manic, barking out lyrics like she’s spraying graffiti on the wall of sound being produced by the band behind her. As the lead singer of L.A.-based hardcore punk party band Neighborhod Brats, she’s the fiery eye of a party hurricane. She and fellow Midwest transplant, guitarist George Rager formed the band in San Francisco in 2009. Both had a penchant for partying and listening to 1980s Southern California punk bands like Black Flag, Circle Jerks, and T.S.O.L. When the quartet, which includes bassist Dan Graziano and drummer Kirk Podell, performs things get wild. “I kind of black out when I’m up there,” says Angelillo, who broke her nose during a show last year. “I just get on stage and do what I do. It’s not planned out.” Recently Neighborhood Brats relocated to Los Angeles. With a handful of EPs out, their debut album on the horizon, and a busy tour schedule in the making, the quartet is ready to throw down like it’s 1981. Check them out on March 23 at Loaded in Hollywood.

★ Punk rock—and its aggressive, musically barebones Southern California offshoot, hardcore—laid the ground for indie music in the ‘80s. “It’s not too serious,” says Rager when asked about the genre’s appeal. “George and I were just two Midwest kids who wanted to be in San Francisco and have a party band,” Angelillo adds.

★ Since releasing a handful of critically acclaimed EPs the band has gained notoriety as a live act, in part due to Angelillo’s antics, which she says aren’t planned out: “It’s just my natural reaction to music.”

★ After San Francisco became too expensive (“We’re musicians, not computer programmers,” Rager says) Neighborhood Brats relocated to Los Angeles in 2012. “It’s way easier to be a musician in L.A. Rent is affordable and you can get anything you need,” says Rager. “Then there are the broken dreams. There’s always someone selling off a really nice amp or guitar because they’ve given up and moved back to wherever they came from.”

★ The songwriting takes place on Angelillo’s living room floor over pots of hot coffee. “Coffee, riffs, and complaining about stuff that’s wrong in our lives. That’s our process,” says Rager.

★ Angelillo and Rager started writing material for the new album last October, but with the recent addition of bassist Dan Graziano, the band only had four days to practice the fourteen tracks before slamming them out in the studio in Oakland in late February. “It’s really fresh,” says Rager. “In that way it has the urgency of our other records, but it’s planned this time.

★ The album, which has yet to receive a title, is scheduled for a June release. Until then, the band has a lot of touring to do both here and overseas.

★ Whatever happens, Angelillo’s magnetic pull to Rager will probably have them making music together for a long time. “I have this weird magnetic pull in my body where I can’t be too far away from George,” Angelillo laughs. “Wherever George and his wife move, I eventually find myself moving there too.”