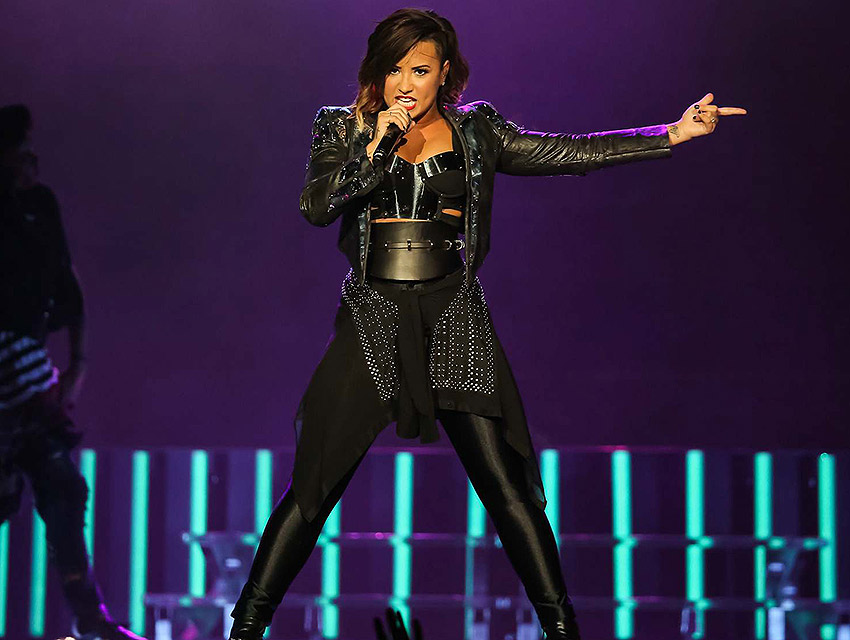 Up until recently—last Saturday, to be exact—I have always pictured Demi Lovato to be a carbon copy of Rosalinda Montoya, the sweet-natured and charmingly naïve character she played in the Disney film Princess Protection Program (which I have absolutely watched). I definitely have not pictured her wearing a black leather bustier festooned with metal spikes or yelling things like, “TRAVIS MOTHER FUCKIN’ BARKER!” at a crowd of 18,000 screaming fans, the majority of whom are girls under the age of 15. But that’s exactly what she wore and said during her concert at the Staples Center on September 27, where Barker made a drum cameo on her first song of the night (the veritable earworm “Really Don’t Care.”) It quickly became clear that Rosalinda Montoya and Demetria Lovato are not the same person (perception: shattered) and that profanity/cleavage weren’t the only surprises Lovato had in store on the L.A. stop of her world tour.

For those who haven’t bothered to follow Lovato’s career, let’s get something out of the way: the girl can sing. Get over your fear of being judged by your Facebook friends and Spotify her discography, because you’re going to have the last laugh five years down the road (probably sooner) when she wins a Grammy. At 22 years old, her vocal range is astounding—as One Republic frontman and prolific producer Ryan Tedder put it, she’s a “crazy talented” singer with “complete power and complete control” and has one of the widest ranges of any star he’s ever worked with. Coming from a man who has spent time in a studio with Beyonce, Adele, and Kelly Clarkson, that’s quite a statement.

Those spectacular pipes were put on full display for nearly two hours this past weekend but not before four opening acts took the stage. MKTO, Christina Perri, and local rapper Becky G. hyped up the crowd pre-Demi, but it was motivational speaker Spencer West who held the audience’s attention. In an unconventional move, Lovato asked West, who lost his legs to a genetic disorder at the tender age of five, to share his story with her audiences. West was told by doctors that he’d never be a functioning member of society but has since proved them wrong (by climbing Mt. Kilimanjaro, for example). He and Lovato met in East Africa last year on a trip with the organization Free the Children, and early last month, he officially joined the tour.

Lovato began her set close to 10 p.m. and performed a wide array of hits, some even from her Disney days. Speaking of Disney, her former flame and Camp Rock costar Joe Jonas showed up for a duet, although for all I know his mic was on mute because a cacophony of screams—the likes of which I haven’t heard since my Backstreet Boys days—drowned out his vocals. About an hour in, Lovato demonstrated her immense and unadulterated talent by performing ballads like ”Warrior” with only the accompaniment of an acoustic guitar or piano, because why use a full band as a safety net when you can hit a G5 without even blinking? It was during her time behind the piano that she also shared a few words about her past struggles with cocaine and alcohol abuse, an eating disorder, and bipolar disorder. “I’m entering a new chapter of my life where I’m not talking about the past anymore,” she said. “Your mental illness doesn’t define you. Just like mine doesn’t define me or my music.”

If you missed her performance last week, Lovato will be back in L.A. on October 8th to co-headline VEVO’s inaugural Certified SuperFanFest concert at the Barker Hangar in Santa Monica alongside Iggy Azalea. Lucky fans might be able to score free tickets on 1Iota.

“Tell Me Why,” Or, a Sound Argument for Seeing the Backstreet Boys in Las Vegas

12 Ways to Have a Totally Instagrammable Weekend, 9/8

The Grove’s Free Summer Concert Series Is Back, and Here’s the Lineup