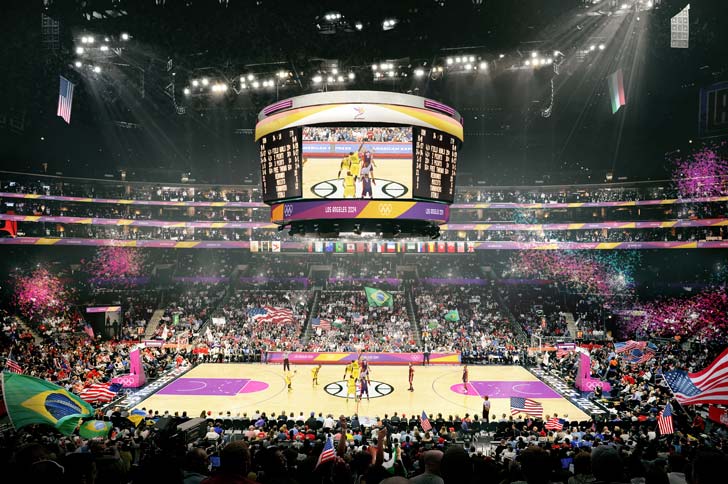 UPDATE: JUNE 26, 2020 – The NBA is scheduled to restart its season on July 30–over five months since the last time teams met on the court.

According to USA Today, teams will travel to Orlando between July 7 and 9 to enter the “bubble environment.” Once sealed in, players and staff will be kept inside the Disney World complex under guard. An anonymous tip line will log reports of any violations of the health and isolation protocols laid out in the league’s 113-page manual.

Out of 302 players who have been tested for COVID-19 so far, 16 have been confirmed as currently positive for the virus, the NBA announced on Friday. Before any player or staff member who has tested positive can join the bubble, they must undergo a period of self-isolation, followed by two consecutive negative tests and a medical screening.

Not every player has agreed to participate in the bubble season. Los Angeles Lakers player Avery Bradley is among those who have confirmed they will not be going to Orlando. Bradley, who has a young son with respiratory ailments, felt it would be unsafe for him to join his teammates.

“As committed to my Lakers teammates and the organization as I am, I ultimately play basketball for my family,” Bradley told ESPN earlier this week. “And so, at a time like this, I can’t imagine making any decision that might put my family’s health and well-being at even the slightest risk.”

JUNE 4, 2020 – After weeks of wondering when and how live sports might resume, the NBA Board of Governors has voted today to approve a novel plan that could see games resuming as soon as late-July. Under the plan, 22 teams–including the Lakers and Clippers–would all travel to Orlando, Florida, and consent to enter “a bubblelike environment” for the duration of the season, The Washington Post reports.

The players and their organizations will all take up residence, train, and play their matches within the ESPN Wide World of Sports complex located at Disney World. Once in, they will limit any contact with any individuals outside the “bubble” community, to isolate from potential COVID-19 exposure.

A proposed schedule would allow each of the 22 participating teams to play eight games that would be considered the last of the regular season. After that, the typical 16-team playoff format would commence, with the possibility for a ‘play-in round’ to confirm which teams advance.

While a plan to conduct games in Las Vegas had been floated earlier, the Post notes that the Florida plan fit with a long-standing corporate relationship between Disney and the NBA, as well as logistical advantages to the complex itself.

The timing of the announcement struck an ill note for many, including Los Angeles Clippers player Patrick Beverley. “Everything going on right now,” he tweeted, “[Basketball] is not important.”