A few days after the Super Bowl, Tai Leclaire, a Mohawk-Mi’kmaq Native American, tweeted about the irony of the NFL’s slogan “End Racism” stenciled on the field’s end zone just above the word “Chiefs.” The Kansas City Chiefs’ logo and tomahawk-chop chant have long been criticized as racist and derogatory. “As a full-time writer and comedian, I’m so upset knowing I’ll never make something as funny as this,” Leclaire posted, along with a photo. His Tweet received more than 200,000 likes.

As a full-time writer and comedian, I'm so upset knowing I'll never make something as funny as this pic.twitter.com/IILekL82zn

Leclaire is writing for Rutherford Falls, an upcoming comedy series on NBC’s Peacock network starring Ed Helms. He’s part of a staff of five Native American writers, the largest for an American sitcom. He’s also among the many names included in Kliph Nesteroff’s new book, We Had a Little Real Estate Problem: The Unheralded Story of Native Americans & Comedy.

Nesteroff, who lives in Hollywood, worked as a stand-up comic in Vancouver and Toronto for more than seven years. In 2015, he wrote The Comedians: Drunks, Thieves, Scoundrels and the History of American Comedy. For his latest book, Nesteroff traces Native Americans’ uneasy relationship with show business, dating back almost 150 years, and how contemporary comics are redefining their identity.

According to his research, Native Americans were first hired as entertainers in Wild West shows in the 1880s. Showmen like Buffalo Bill Cody staged rodeo-style spectacles that recreated battles and mythologized frontier life. Native Americans took these jobs as a way to earn a living and to escape the oppressive reservation system, but were always portrayed as the aggressors, and cowboys as the heroes.

With the advent of vaudeville came one of the most famous vaudevillians, Will Rogers. Born in Cherokee Nation, Indian Territory, now part of Oklahoma, Rogers performed rope tricks in rodeos and vaudeville before becoming a film star, radio commentator, and political humor columnist, often addressing Native issues. Despite his tribal roots, much of Rogers’s stage persona was as a cowboy. He was the first Native personality popular among the white population, though few people today know about his ancestry.

Stereotypes persisted in movies, especially Westerns, but also cartoons and sitcoms from the 1950s and ‘60s. It was standard practice to cast white actors wearing brown-face as Indians, who were depicted either as savages or stoic and humorless.

Indigenous comedy changed in the 1970s with acts like Williams and Ree, a duo from South Dakota who bill themselves as “the Indian and the White Guy” and have been performing for more than 50 years, a staple of Nevada’s nightclubs and casinos. They even appeared on Hee Haw, the hokey, country variety show that aired on and off for nearly 30 years. But Charlie Hill was the first to break Hollywood’s glass ceiling.

An Oneida Indian from Wisconsin, Hill started stand-up at the Comedy Store, whose late owner Mitzi Shore mentored him. The club was then fertile ground for network scouts and regulars like Jay Leno, David Letterman, and Robin Williams, who would become superstars. Hill made his network TV debut on The Richard Pryor Show in 1977 and became the first Native comic to appear on The Tonight Show Starring Johnny Carson. “My people are from Wisconsin. We used to be from New York. We had a little real estate problem,” he joked in his stand-up. Hill wrote for Roseanne and starred in a short-lived NBC variety series. After the comedy-club boom of the 1980s, Hill’s career waned; he died of lymphoma in 2013. 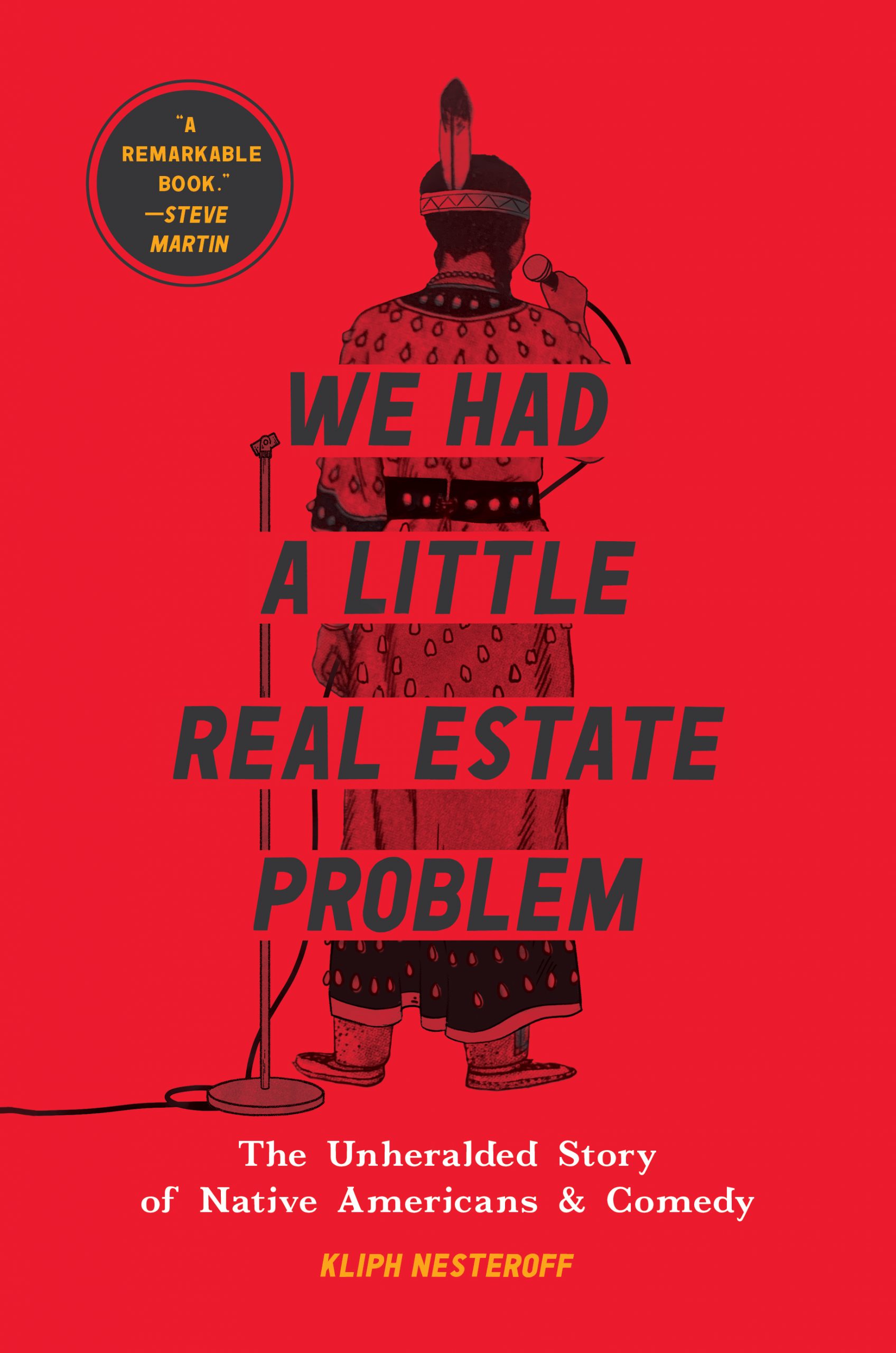 “To non-natives, he was basically an unknown,” Nesteroff says to Los Angeles. “But he was famous in every indigenous community in Canada and the U.S. because it was so rare to see a Native American comedian on TV. He often went to Native communities and performed in person, and was the first Indigenous comedian these communities ever saw, and in some circumstances, the first live comedian they ever saw. So he was a bit of a hero and still is to this day.”

Hill is as much an influence on today’s Native comics as Pryor, George Carlin, Eddie Murphy, Cheech and Chong, Saturday Night Live, and Monty Python are. Some of the comedians Nesteroff spoke to live in cities. Some in rural areas that are hours from the nearest comedy club. Many have honed their skills at casinos and pow wows on reservations, where postcolonial trauma, addiction, and suicide are still big issues. But all share the same struggles that comics everywhere can relate to: waiting for stage time, feeding families, playing to empty rooms.

In an age of increasing diversity, though, a lot of Native comics are making progress in the industry. Navajo-Mexican Sierra Teller Ornelas, who co-created Rutherford Falls, also worked on Brooklyn Nine-Nine, Happy Endings, and Superstore. Adrianne Chalepah, a Kiowa-Apache, opened an event for Michelle Obama and cofounded the Ladies of Native Comedy show. And Joey Clift, who’s of Cowlitz descent, started the first all-Native sketch show at UCB in 2018 called The Ghost of Christopher Columbus Theater Smudging Spectacular.

“Your average person is not very educated about the Native experience,” says Clift. “I’ve had adults ask me if I was born in a tipi, if the reservation I was on had electricity growing up. It’s hard to do jokes about Native genocide, but it’s easy to make jokes about how ignorant your average person is. I knew all these funny Native comedians from Hollywood who weren’t necessarily getting opportunities at bigger comedy theaters like UCB or in mainstream media. Sometimes we’re only booked around Thanksgiving or Native American Heritage Month. We’re often tokenized. That’s fake wokeness. And we’re often put in education positions where we’re expected to educate the audience on 200 years of history instead of doing the thing that we came to L.A. for, which is comedy. So for me, the goal of my show was to give them the opportunity to perform.”

Nesteroff especially gives credit to the 1491s, an intertribal sketch group—their name refers to the year before Columbus arrived—who’ve become popular thanks to their YouTube videos, some of which have been viewed more than a million times. They mock Native stereotypes and tropes in pop culture, whether it’s offensive Halloween costumes, the Twilight movies, or Johnny Depp posing as an Indian. They performed at Barack Obama’s second inauguration and appeared on The Daily Show with Jon Stewart. Member Sterlin Harjo, a filmmaker, wrote and produced Reservation Dogs, an upcoming FX comedy co-produced by Taika Waititi, while Bobby Wilson also writes for Rutherford Falls.

“The internet has been a hugely game-changing tool when it comes to creating your own content,” says Clift. “The new generation are doing really great stuff on TikTok and Instagram. I get a lot of my opportunities off Twitter. It’s allowed us to create work in a pipeline that’s more accessible to people.”

“It has helped immensely,” adds Nesteroff. “It’s allowed people to realize just how many brilliant Indigenous artists there are out there right now in all fields, not just comedy. Natives are an underrepresented minority and it’s helped to diminish the idea of isolation. You might be in New Mexico, but you can see artists doing something in Winnipeg, Manitoba. Those two areas seem completely remote, but because of the Internet, there’s a sort of common struggle and renaissance of creative expression.”

RELATED: Kliph Nesteroff Is the King of Comedy Lore