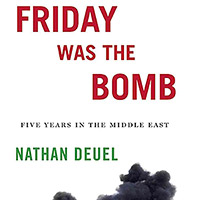 In 2008, Nathan Deuel and his wife Kelly McEvers gathered their belongings, got on a plane, and moved to Riyadh, Saudi Arabia. The next five years of their life together were punctuated by the birth of their daughter Loretta, the turmoil of the wartorn Middle East, revolutions, uprisings, and an overwhelming sense of fear and unertaincty. Now living in Venice, the author sat down with us to discuss his memoir Friday Was the Bomb: Five Years in the Middle East, a collection of remembrances about the committment to covering the news of a turbulent region while trying desperately to keep his daughter safe and his family together. You can hear more from Deuel at a reading at book signing hosted by Book Soup this Thursday, June 19.

What was the genesis of this book? How did you end up moving to the Middle East?
I had dropped out of school when I was 20 to take a newspaper internship in Cambodia, which is where I met my wife (NPR national correspondent Kelly McEvers). I ran with an extremely fast crowd—a lot of late nights, a lot of drugs, covering really intense stories. By day we were helping a country that had been ravaged by genocide and reestablishing a free press. We were doing great work, but we were living hard. And that set the template for my idea of what life should be like: Lived to its fullest in terms pleasures and indulgence but also having a purpose and a moral core. I interned later at The Atlantic monthly, moved to Indonesia for a couple years, and afterward became a senior associate editor at The Village Voice. I thought I could spend the rest of my career there, but then it got bought by New Times and it was like, fuck. I managed to get a job at Rolling Stone, and Rolling Stone was—if someone had told me at 14 that I was going to be a senior editor at Rolling Stone, my head would’ve exploded. But the reality was something quite different, and it didn’t square with that old Cambodia idea of living life fully. So after a year, I quit my job very abruptly, packed a bag, and I walked from New York to New Orleans. When I got to New Orleans, I thought Kelly and I could stay there forever. Kelly did not agree. So we moved to Saudi Arabia, and so began five years in the Middle East.

Was that a culture shock?
In the beginning, we were fighting the fight together—reporting stories, doing brave and strange things—and then three things happened: the birth of our daughter, the death of my dad, and Kelly got a job [as NPR’s Baghdad Bureau chief] in Iraq. We went from being a swashbuckling pair to me being a stay at home dad with a wife in a warzone in the wake of my own dad’s death. The book is, in the simplest sense, me grappling with growing up.

Friday Was the Bomb is on the shorter side, and the essays are very digestible. There’s also a timeline at the front of the book—how did you come up with the structure?
The perennial question for any essay or story is why should I care? Why now? And with the Middle East, you often have an answer, because it’s like, “Oh, a bomb just went off,” or, “Oh, we’re considering shipping $500 million worth of weapons to the Syrian rebels.” There’s news out there. Another thing you’re often trying to do when writing stories from abroad is tracing a line back to your reader. Why should this reader care? And when we lived in Saudi Arabia, the answer was always, “Oh yeah, 15 of the 19 9/11 hijackers are from here.” So some of that helped me write these essays. A big question I was always asking myself was, “I’m an American, I’m in the Middle East, there’s this complicated legacy of Westerners abroad, and in what way am I different? In what way am I the same?” What happened in the last five years in the Middle East was kind of like a 50-year convulsion. Tahrir Square and Syria and Yemen, these revolutions have completely changed that region. And we were there for it. This isn’t some heavy, policy analysis book; it’s more of a portrait of a life next to these big convulsions. If somebody were to only read one of the essays, which one would you point him/her to?
The one that people seem to love and respond to is “Homeland in my Homeland,” which is a piece that I originally wrote for GQ. Homeland [the show] had some scenes in Beirut, but they made Beirut look like a deserted, decrepit, violent place. I set out to show how modern and beautiful and great Beirut is. So GQ gave me the assignment, I was set up to do it on a Friday, and a car bomb went off that killed [Wissam al-Hassan], the head of Internal Security Force’s intelligence-oriented information branch. The essay ended up being a pretty gripping, slightly scary portrait of what it’s like to live next to bombs and about the limits of storytelling. In the very last scene of the piece I’m going to the ATM to get some emergency money, and I see these three figures coming towards me. I thought, Oh, fuck, it’s like the militia, they’re gonna kill me, when really it was a father and his daughters with ice cream cones. There’s always this tension between fear and reality. There’s a lot of fear in this book.

Writing this must have caused you to re-live those fears all over again. Was it cathartic at all?
It’s a great privilege to be a writer, but the idea that you can make some sense of what you’ve gone through can be, for an essayist, a selfish move. The method or the goal is to put stuff down that will be meaningful for everyone else, too. At the end of one of these I essays, I don’t necessarily want you to have gotten to know me better. If things are clicking, I’m hoping you’re getting to know yourself better. But maybe that’s an impossible goal.

Nathan Deuel will be reading from Friday Was the Bomb: Five Years in the Middle East this Thursday, June 19th, at Book Soup.