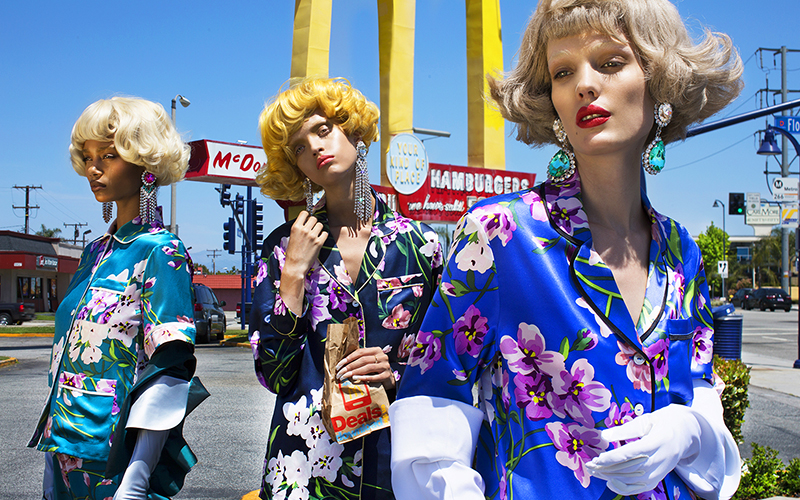 There’s a scene in Kali Uchis’s “After the Storm” video where she sings directly into the camera, her face expressionless as two house sparrows pick apart the perfectly teased curls framing her perfectly made-up face. Moments like this one—odd, funny disruptions of perfection—are where Nadia Lee Cohen thrives.

The L.A.-based artist and burgeoning filmmaker behind Uchis’s video uses her art to subvert and question society’s ideals, whether they center around beauty, wealth, womanhood, or desirability as a whole. She creates characters who operate within the paradigm they’ve been born into, but only on their own terms. Irreverence runs amok alongside a heightened level of self-awareness. Hers are characters that indulge in their freedoms while understanding the manufactured systems that imprison them.

Born and raised in England, Cohen’s work has an incisive outsider’s perspective of the perfection-driven culture of the States. It’s a theme that plays out repeatedly in her pictures and one she’s been able to hone by drawing on the iconography of ’60s and ’70s American suburbia.

She employs all the familiar imagery and styles from the time period—mannequin-like housewives, eccentric interior design, manicured lawns—but injects the scenes with an air of fantastical unease. From blasé facial expressions to chilling crime scenes, there’s always something amiss in Cohen’s worlds. It’s this melding of the mundane and the macabre that leaves you feeling as though you’ve entered a Lynchian portal—a comparison Cohen won’t refute. In fact, she often sites Blue Velvet as a major inspiration.

We caught up with Cohen to discuss her subversive photographs and her future plans for filmmaking.

Your work feels like surreal snapshots of a Lynchian dreamworld—a place where American middle class suburbia is kind of exalted into this exotic realm. It totally subverts our idea of that prosaic American lifestyle of the ‘60s and ‘70s. How did you develop this very distinctive style? What inspired this—especially as someone from England, not the U.S.?

I am fascinated by late ’60s and early ’70s aesthetic and culture. The dark humor just comes with my personality and the way I think. I honestly don’t seek to make juxtapositions within the aesthetics and the message; it just seems to be there in every image.

Describe your creative process—how do you go about envisioning the characters and the scenes you photograph?

It varies, but usually it will start with narrative. I am influenced by cinema and cinematic photography, so I tend to envisage the character—why they have arrived in the situation depicted and what they are feeling, which tends to be something negative, as that is predominantly what interests me.

How would you describe your photographic style in three words?

Who are you favorite photographers?

There are many, though they haven’t altered very much since discovering them at university. I am drawn to photographers who deal with narrative in a cinematic way, to name a few; William Eggleston, Philip Lorca Dicorcia, Nan Goldin, Cindy Sherman, Martin Parr (Martin more for humor than cinematic narrative).

You’re originally from England—why did you choose to move to L.A.?

The landscape and the people inspire me, though I have to make frequent trips out of L.A., as I become blind to the landscape if I remain here for long periods of time without a break.

Who do you dream about photographing?

Most people I want to photograph are dodging the grave, so I try not to get too hung up on the idea of capturing them as I would be devastated if I had my heart set on it and I couldn’t get to them before they’re six feet under.

Your project “100 Naked Women” is an ongoing series you’ve been working on consistently for the past couple years. You’ve used it as a way to comment on society’s censorship of the female form. What inspired this project?

I don’t see the big deal about being naked, and the concept is magnified nowadays by the rules and restrictions in place on the internet.

I just wanted to create a beautiful, fictional and cinematic universe where women are going about their day and they just happen to be nude or partially nude; a world where these restrictions do not exist.

Initially it wasn’t a direct social comment; it became the catalyst when I first mentioned I was embarking on the project and noticed the kind of women that wanted to be involved; most being advocates against censorship of the female form.

Do you have a favorite photograph you’ve taken?

The red haired girl outside McDonald’s.

I’m getting this book done! I am also spending a few weeks in Italy with some close friends and family to try and focus on writing my first feature.