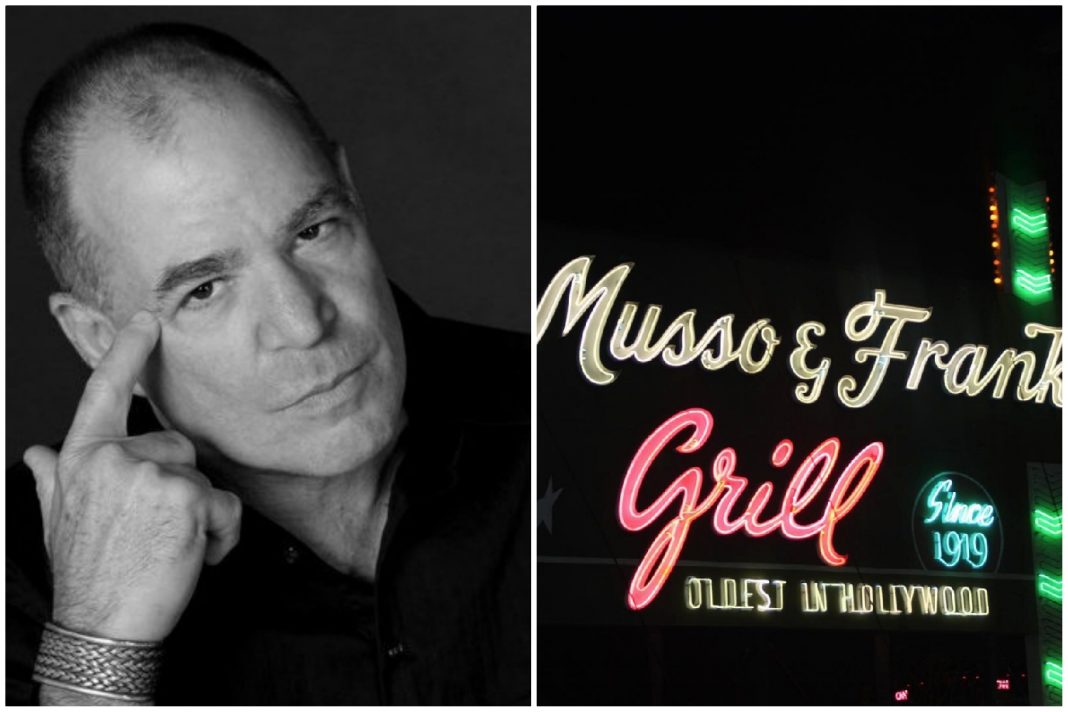 At Musso & Frank Grill, the link between liquor and literature was forged by a long list of luminaries who graced the bar. The hallowed Hollywood institution’s red-jacked bartenders have mixed drinks for Charles Bukowski, Raymond Chandler, Kurt Vonnegut, Dorothy Parker, Lillian Hellman, and Joseph Heller, making it one of the most famous hangouts in L.A.’s literary history. While much of Musso’s nearly 100-year story focuses on the writers who patronized the bar, poet Kenneth “Sonny” Donato works behind it five nights a week.

When Sonny isn’t serving up perfectly stirred martinis or his personal favorite, Sazeracs, he’s writing poetry and occasionally performing his work in front of an audience. Born 70 years ago on Long Island in New York, Sonny hitchhiked his way across the country in 1967, eventually winding up in Los Angeles because, as he puts it, “the highway ended.”

As the opening act for Molly Lewis’s whistling lounge act (yes, you read that right) at Zebulon, Sonny serves as a muscular counterpart to Lewis’s ethereal music. Sonny’s evocative poetry is rooted in his love for Los Angeles, paying tribute to twilight on Route 66 or the faded tracks of the old red line train.

Sonny got his start bartending at a place called Starwood in West Hollywood in 1975, where seminal punk and heavy metal bands including Van Halen, X, and the Germs kickstarted their careers. His literary life began around the same time, when he befriended Charles Bukowski and spent a summer drinking with him in 1974. “His IQ was high and his lifestyle was really low,” Sonny recalls.

He was soon recruited to run the front bar at the Troubadour, where he rubbed elbows and poured drinks for Joni Mitchell, Tom Waits, and Gene Clark of the Byrds. The lines between patron and bartender, songwriter and poet, artist and entertainer quickly dissolved.

Sonny’s social circle came to encompass some of L.A.’s most lauded literary, musical, and acting talents. “I became part of a group of artists. They spurred me on and gave me confidence,” Sonny remembers. “The times we shared, we shared united—regardless of what anyone did for a living.”

Sonny took his extensive experience barhopping with writers and artists and published a book in 2011, A Poet’s Guide to the Bars. It was around that time Sonny also started bartending at Musso’s. Fourth-generation owner Mark Echeverria wasn’t aware of Sonny’s literary background when he hired him but immediately knew he had found someone in the Musso’s mold. “True bartending isn’t just about making drinks. You’re [also] playing the role of psychologist and entertainer. Sonny fit that to a T.” Echeverria discovered Sonny was a poet just two years ago and says that suddenly it clicked for him. “He showed me one of the books he’s in and suddenly it fit together. He’s incredibly talented.”

Echeverria isn’t the only one who noticed Sonny’s preternatural skills behind the bar. Quentin Tarantino cast Sonny as—what else—a bartender in his upcoming film Once Upon a Time in Hollywood, which spent five days shooting at Musso’s.

Lewis, who met Sonny at Musso’s bar, was instantly besotted by his poetry, even if it took a little longer to befriend its author. The true joy for Lewis, however, is in hearing him read his own work. She took a chance on adding Sonny to her lounge night lineup at Zebulon, and to her surprise he agreed to it. Both wondered if a hip Eastside crowd coming to see a whistling virtuoso would accept a poetry reading. When Sonny gets in front of the mic the crowd gets quiet, riveted by his lyricism and stage presence.

Lewis chuckles, “Everyone shuts up when Sonny gets on stage.”