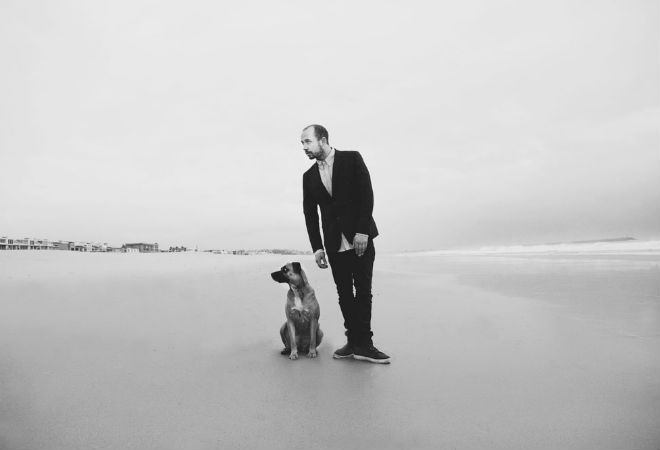 He produced albums for the Happy Mondays and Ariel Pink, wrote the score for Celeste and Jesse Forever, and just released his second solo album Hush Now, but despite the workload Sunny Levine is the epitome of L.A. chill. The album has a distinctly California sound that’s as laid back as an afternoon on the beach and as smooth as a breeze rustling through the palm trees. It’s a clean break from Levine’s previous work in the satirical hip-hop group the Trilambs but a fitting sequel to his first solo record Love Rhino, which shares a narrative of love lost with Hush Now. Levine is busy promoting Hush Now and expects to play a couple of shows around L.A. before heading to Japan in October where he’ll play at the opening of a new Citizens of Humanity store. Here are eight things we learned about the musician.

❶ “I’m not a surfer or anything, but I’ve always lived right by the beach. It’s a big part of me,” he says, explaining how his sound is shaped by Southern California. “If I had made [Hush Now] in New York, it would sound totally different. It’d be harder and more angular. It’s a smooth album that you don’t always have to pay attention to. Had I recorded it anywhere else, it would’ve probably been more in your face.”

❷ The title Hush Now is a lyrical reference to Billie Holiday, who has always been an influence. “My father is a serious jazz dude and Billie Holiday has been like wallpaper since I was a kid. She’s always been there.” In the past, Levine has stayed away from jazz influences in his music, but that changed with this record. “The chords are very jazzy and they come from a very 1930s to ’40s kind of place, but the title also worked well with what the album is about. It’s a love story gone bad, and the lyrics are about trying to stay calm and knowing that everything is going to work out.”

❸ Unlike some artists who are vague about the specific experiences that influence their songwriting, Levine is candid about Hush Now’s lyrical universe, which revolves around a break-up. “The lyrics aren’t vague. It’s a definite story I’m telling. It’s like a conversation with the person who it’s about. It’s the conversation you can’t have. I think of the songs as little postcards that I wrote but didn’t send.”

❹ He comes from an impressive musical lineage. His father is music producer Stewart Levine, who has produced songs and albums for among others Minnie Riperton, Lionel Richie, and Simply Red, and his grandfather is Quincy Jones.

❺ Dad and granddad have both encouraged him to be tough in his creative work: “My grandfather and my father have always told me, you’ve got to be able to walk into any room and handle yourself, no matter what it is.”

❻ “It’s like having a patron,” says Sunny Levine about Citizens of Humanity. He first worked with them on the soundtrack to the Just Like You short film series, which profiles celebrity innovators. When they approached him to continue the collaboration, the L.A. native knew exactly what to say: “I told them I was working on a solo album because I hadn’t made one in a while. They said, ‘Great, let’s do that.’ They gave me money to help produce the album and they’re helping me promote it.”

❼ Trying to make it in today’s music business has been a lesson in survival, which Levine is ultimately thankful for. “Because the business went away, I’ve had to work really hard and do things differently, like working with a brand instead of a record label to get my album out. I’ve done unconventional jobs here and there and it’s made me better at what I do.”