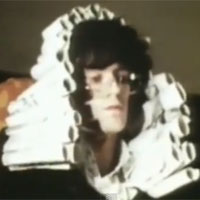 Here’s a retro flashback in case you weren’t one of the lucky 350 people who scored tickets to see the Rolling Stones play a show on Saturday night at the Echoplex. That’s right, one of the biggest music acts in the world played a 14-song set at the mid-size Echo Park club. (Skrillex, Johnny Depp, and Bruce Willis were reportedly in the crowd.)

The surprise performance was announced on Saturday at 12:30 p.m. on the @GRRRegory Twitter feed although fans had been lining up outside the El Rey Theatre since the morning. By 1:56 p.m. the $20 tickets (limited to one per person) had sold out. The gig was a trial run for the band’s “50 And Counting Tour,” which kicks off this Friday in a slightly larger venue, Staples Center.

After half a century of success, it’s easy to forget how truly weird the Stones were. Here they are in 1967, starring in a short promo film for “We Love You,” an oddball single that peaked at #50 in the U.S. If a song can be both cheery and droning, this one is. Supposedly, it’s also a response to the Beatles’ “All You Need Is Love” and features uncredited backing vocals from John Lennon, Paul McCartney, and Allen Ginsberg. If that’s not kooky enough, wait until you see the video: It stars Mick Jagger, Keith Richards, and Marianne Faithfull reenacting the trial of Oscar Wilde.