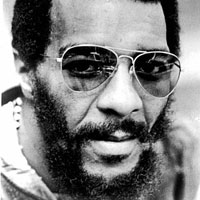 Richie Havens is probably best known to modern music fans as the man who opened Woodstock. When he took the stage at the 1969 music festival, audiences couldn’t help but listen to his fiery rendition of “Freedom,” a riff on the old spiritual “Motherless Child.” (Maybe you recognize the song from the Django Unchained soundtrack.) 44 years later, the intensity of his voice, with its gravelly warmth and tremulous emotions, has not diminished.

Although that moment made Havens famous, he played for three hours at the festival and had a career that spanned 50 decades and dozens of albums. His 1970 cover of George Harrison’s “Here Comes the Sun” hit the Top 20. The list of performers he influenced stretches from Sly Stone and Gil Scott-Heron to Tracy Chapman and Jeff Buckley.

The Brooklyn-born singer died today of a heart attack at the age of 72. Here’s Havens singing a medley that slides seamlessly from “Tupelo Honey” by Van Morrison into a cover of Bob Dylan’s “Just Like A Woman.”