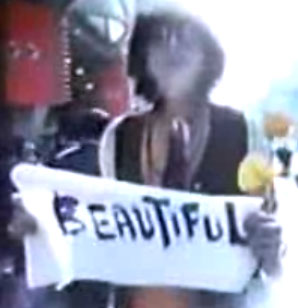 They’re from Guadalajara. They’re called Lorelle Meets The Obsolete. They have some of the best fans ever. One of them made this video for the track “And Time Will Act Upon Them.”

(Sort of) following in the footsteps of goofball rocker Darwin Deez and French rapper Flynt, who appropriated existing footage by inserting themselves into it, DIY video artist Maxime Fohlen has remixed a bunch of found footage to create a tripped out visual arcade that’s perfect for the band’s spacy, psych rock. (Warning: A few brief moments are NSFW.)

It’s a bonus that the music is good. So good we’re looking forward to their set this coming Saturday (June 15) at Permanent Records in Eagle Rock. Lorelle Meets The Obsolete will also be playing a house show that night in Fullerton.