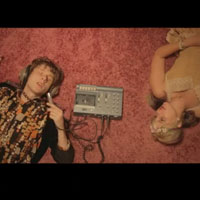 Even if the title of this track wasn’t “San Francisco,” even if the chorus never mentioned the singer’s propensity to leave his lover (accidentally or not) in the aforementioned city, this song would ooze a certain San Francisco vibe. Not the San Francisco of 2012, populated as it is with tech millionaires who’ve lost their shirts and bought them back, but the San Francisco of an earlier era — maybe the late ’60s, maybe an altogether imagined one.

Founded in 2005 by a pair of Westlake Village high school kids “obsessed with the Brian Jonestown Massacre” (if Pitchfork is to be believed), Foxygen plays a particularly sweet take on psychedelic pop revivalism. Lead singer Sam France veers between the dulcet tones of Donovan and the vocal tics of Lou Reed while his compartiot, Jonathan Rado, makes the guitar cheerfully weep. In other words, if Wes Anderson started a band devoted to covering obscure, decades old French pop songs en Anglais seulement, this is what it would sound like.

Foxygen’s new album, We Are The 21st Century Ambassadors of Peace & Magic, comes out tomorrow (January 22) on Jagjaguwar.